In the latest installment of Standard Sounds' video series, Wet takes over The Penthouse of The Standard, East Village with their friends and performs "You're the Best" with New York City in every direction.

On a beautiful late-July afternoon, the three members of Wet—vocalist Kelly Zutrau, percussionist/keyboardist Joe Valle, and guitarist Marty Sulkow—checked into The Standard, East Village. The group was in town for a one-off show in the midst of wrapping up work on their first full-length album. A year or so earlier, the band members left New York City (where they formed) for Western Massachusetts, and this brief visit was a chance to see their New York friends.

Wet first drew notice in 2014 with a 4-song EP of spare, electro-tinged pop and the yearning, '90s R&B-inflected vocals of Zutrau. Their sound landed perfectly in the moment, with the musical landscape shifting towards keyboards, atmosphere, and electronic textures. Everything about the group—from the production to their stripped down visual aesthetic—seemed to emerge fully-formed. Since then, their trajectory has only continued upwards with a string of singles and anticipation building in the lead up to Don’t You, out January 29th on Columbia.

In person, the members of Wet are easy-going, unassuming, and funny—still more the art school kids, than major label artists that they are. One by one, their friends started turning up and kept coming throughout the afternoon into the evening. Gathered on the patio, the band played their single “You’re the Best” in the open air with the sights and sounds of the city all around them. The band, in the moment, with their friends gathered around—it really was the best. Songs from a Room: Olly Alexander of Years and Years Performs 'Memo' 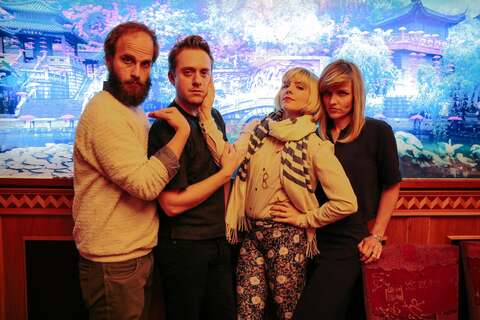 One Night with "High Maintenance"

East Side vs. West Side