The first line of New York City musical icon Thurston Moore’s bio reads: “Thurston Moore moved to NYC at 18 in 1976 to play punk.” It sounds almost quaint. Moore is, of course, the guitarist and founding member of Sonic Youth, the band that made its name bringing avant-garde impulses and references to the popular culture of rock. Since the band went on indefinite (or perhaps permanent) hiatus, he has continued to release music in various configurations — most recently, The Best Day. He also keeps himself busy pursuing his other interest: avant-garde poetry, zines, and small press book culture.

In 2013, Moore launched Flowers & Cream, a small poetry press that he edits with the poet and musician Elaine Kahn. The press has released a clutch of books, all in a uniform, compact, silver-coated format from underground poets, including Ben Estes, Anselm Berrigan & John Coletti, and Dana Ward.

In keeping with this month’s exploration of all things Books, we caught up with Moore on tour in England to learn more about his motivations for starting the press, his counter-cultural reference points, and keeping the spirit of the New York School alive.

What made you decide to launch Flowers & Cream?

I had been editing the Ecstatic Peace Poetry Journal since 2000, which is primarily an anthology, though I did use one of the number as a single author publication—the singularly-named poet Bree from the wilds of Cleveland, Ohio. The journal was always a legal size, xeroxed, stapled ‘zine, and I had the desire to publish perfect bound books in limitation. I was inspired by the cut size and aesthetic physicality of the poetry books published by Telegraph Books in the early 1970s. This press was edited by Victor Bockris and is known mostly for the publishing of “Seventh Heaven” by a young Patti Smith.

What did you want to create with the press?

I was so smitten with how Telegraph Books looked, read, and felt that I decided to be completely fetishistic to the point of copying every aspect of Telegraph Books from the font, font size, cut size etc.—the only difference being that I decided to use silver card stock, which referenced a poetry anthology from the same era titled LIP, which came out of the Middle Earth Bookstore in Philadelphia, PA and had association with Bockris as well.

Is there a common thread to the poets you’re publishing?

I had asked the poet Elaine Kahn to administer and co-edit the series with me and her feeling was that we should focus on young poets, mostly first publications—which is true for Ben Estes, the first poet we published, and Cody Rose-Clevidence. The young poets would be working in a familial zone that both Elaine and I felt in community with.

“A short litany of words” adorns each Flowers & Cream back cover

Some favorite lines from the books F&C has published thus far?

I chose a short litany of words for the back cover of the first book (Ben Estes) and subsequently would have the poets choose their own random words or phrases for their own back covers. Those lines I love as they move past the poem texts inside and create a new space, one with a certain personal meaning, often with a sense of levity.

How long have you been involved/interested in avant-garde poetry?

It correlated with my interest in avant-garde music and film. But I don’t really consider underground poetry as avant-garde, so much as simply modernist in its intention. The avant-garde tendency towards radical line breaks and its vocabulary would move a lot of work into more visual/spatial territory, but I think the community aspects of Frank O’Hara’s writing (into the work of Ted Berrigan/Alice Notley/Bernadette Mayer—all examples of New York School history, as well as other communities throughout the western hemisphere) touched my interests through its spirit energy—and its artistry, which I found relative to my love of experimental music.

Where did the name Flowers & Cream come from?

I used it in a Sonic Youth song called “Pink Steam”, itself a title taken from a book by the poet/essayist Dodie Bellamy. It has some direct reference to 7 Flowers Press, an underground poetry press of the 1960s from Cleveland, Ohio and the scene around the poets there, namely, d.a. Levy and D.R. Wagner.

Do you see “The Underground” in music/poetry/visual art “in conversation”?

For me it is total conversation and I work in each discipline where they have equal value and influence.

What can musicians learn from poets?

How to bring adventure into lyric writing.

Who are a few of the poets that you think more people should know?

I like the work of a NY area poet, Amy Matterer, and I love what I’ve read by Ann Boyers, Ally Harris, and Mel Nichols — all poets we’d love to publish, by the way.

What are some of your favorite small presses?

So many great small presses — right now I’m very impressed by b_books from Berlin, which is less a poetry small press than one dealing with non and beyond straight/queer/quAre theory and fun.

What are your reading habits?

I read in bed. Our books are designed as such. 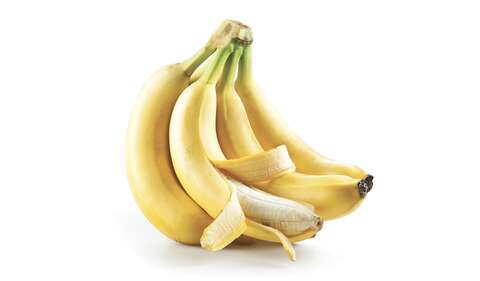 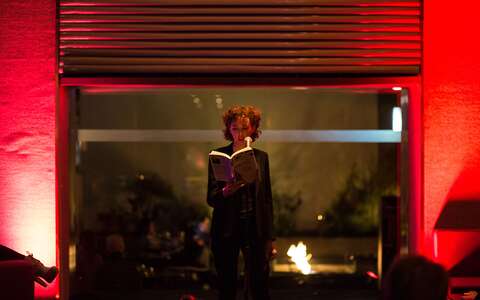 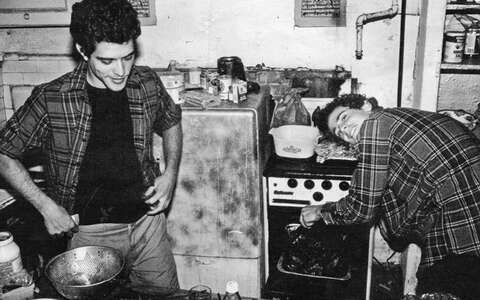