Before they take the stage at The Standard, East Village Penthouse, get to know the NYC rockers of The Chordaes in their interview with our East Village music maven, Annie O, below.


ANNIE O: Where are you based now?
THE CHORDAES: Chordaes Headquarters is in the heart of lower Manhattan, though two of us commute from the Jersey Shore. We’re lucky to be in such a vibrant area, surrounded by plenty of music venues.

What does The Chordaes mean?
Chordae tendineae is the group of tendons in the human heart that is commonly referred to as “the heart strings.” The ultimate goal of our music is to elicit an emotional response and pull at your heart strings.

Tell us about your EP In Itinere. When did you start writing it and where did you record it?
The EP was written in 2016 as the election unfolded. While the songs aren’t overtly political, the emotionally-charged mood of the country definitely played into the writing. We recorded at Shorefire Studios in Long Branch, New Jersey where our producer, Marc Swersky, and engineer, Joseph Demaio, worked their magic. Shorefire is a playground of vintage gear, and for the music we love, we couldn’t ask for a better place to record! To get the texture and feeling we wanted on this project, we recorded most of the instruments live and used a combination of modern and analog keyboards as well as two drum kits. One was a vintage Ludwig cocktail kit skinned with new Evans Calftone heads and mic’d up with tube microphones through the studio’s legendary Helios “Big Brownie” console.

Is there a song on the album that's particularly personal to you or that you're most excited for audiences to hear?
The whole EP is meant to culminate in the final track, “California.” “In Itinere” roughly translates to “on a journey,”  and “California” is the destination for the emotional journey. It’s definitely the heart of the whole project and we hope it connects with our listeners.

What were your sonic influences on this EP?
Artists such as Brian Wilson, Todd Rundgren, Glenn Campbell, The Beatles, The Funk Brothers, and, especially, the great session players of The Wrecking Crew.

Any touring plans?
For now, we’re doing a bunch of one-off shows in the tri-state area, but we do hope to embark on a tour in the near future. We really enjoy spending time on the road, so it’s something we’d like to do in 2018.

Are there any tracks by other artists you currently have on repeat?
You can often hear “Heaven or Las Vegas” by The Cocteau Twins coming from Chordaes Headquarters or “You Can Call Me Al” by Paul Simon from our Asbury Park, NJ camp.

What can we expect from your show at The Annie O Music Series?
Our plan is to approach some of our songs from the EP with different arrangements. We’ve sort of catered the performance to fit the space we’ll be playing in. We’ll also be playing a new song called “Venus” that we just recorded and we’ve rarely played live before.

If The Chordaes had a superpower, what would it be?
We’d be lucky to be endowed with the power to stop time. If you know us, you know that we move at our own pace. Sometimes it’d be helpful to stop the clock for few minutes.
Previous Next 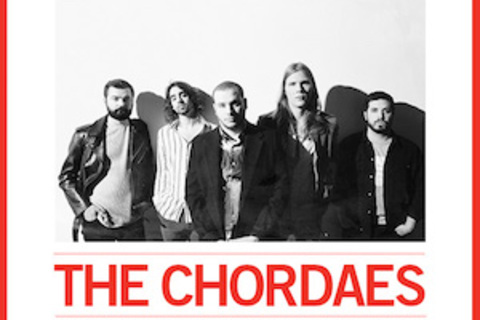