On Monday, January 8th, Annie O brings a fellow Frenchy, Brooklyn-based singer Livia Blanc, to the Penthouse for an intimate night of 1960s nostalgia. In 2017, she grabbed attention with her first music video and singles, and she's poised to have a breakout 2018.  Get to know her before the big night through her interview with Annie O below.


ANNIE O: Where are you based now?
LIVIA BLANC: Brooklyn, New York.

Tell us about where you grew up and how that influenced your musical style.
Growing up in Tahiti, I was listening to a lot of ukulele and toere, which influenced my music a lot. I love rich drum compositions and elaborate percussion. In French Polynesia, we celebrate the Heiva in July, a festival where many groups of fifty-plus traditional dancers and musicians compete. It’s quite impressive to see them dancing and singing together. It inspires me in every song I write.

When did you make the move to the U.S.? What are some things that you are still getting used to living here?
Winter. I’ve been living in New York for seven years and I am still not getting used to winter. I doubt I ever will. I am just not wired for the cold. Love the fashion. Hate the cold.

Where and when did you record this new EP? What was your vision with it?
I recorded this EP in 2017 in Brooklyn. First and foremost, I wanted this EP to be honest. I am writing in French for the first time and wrote it from a very personal place. The music essentially revolves around themes of tragic romance, glamour, and melancholia. We took references from the French pop culture of the 1960s with Brigitte Bardot or Francoise Hardy. I wanted to bring my audience into the dark and romantic world of the 1960s nostalgia but bringing it into a new, more contemporary place. Being bound to our becoming requires ceaseless work, but offers us the most satisfying, unending freedom. My music is my freedom.

Any touring plans?
There’s nothing booked outside of New York right now, but I would love to tour. I'll go anywhere my music takes me.

Who is an artist that you would love to collaborate with?
James Vincent Mcmorrow. Hands down. Of course there are many artists I admire and would love to collaborate with. I have been listening to his music since forever. I actually was listening to his album Early in the Morning when landing in New York for the first time. I finally got the opportunity to see him live last year. His show was mind-blowing and his voice is nothing short of incredible.

Are there any tracks by other artists you currently have on repeat?
I am an “obsessive listener” as I call it. I tend to listen to music I like on repeat until it imprints this particular moment of my life. Years later when I hear it again, I can remember every single detail of that time pretty much like a time machine. It takes me back.
Lately I have been listening to a song called “La Chanson des Vieux Amants” (“The Song of Old Lovers”) by Jacques BREL over and over and over, and I tend to cry everytime.

How is it to sing in French for American audiences?
It’s awakening. Singing in French in front of an American audience is completely liberating. For a long time I felt insecure about my writing, but writing in French for an English-speaking audience has given me more confidence and freedom and opened wide the door of the box I had put myself in. After all, my words are my emotions. It didn’t matter what language I was telling my story in, people would relate and understand it because they would feel it. Sometimes they couldn’t understand my words but they could feel them. Often after my shows, people come to me tell me their stories. You would be surprised at how much we have in common. At the end of the day, what I want is to share an experience with the audience, and I believe music to be the best way to do it.

What can we expect from your show at The Annie O Music Series?
It’s going to make you think, “Oh man, if my high school French teacher sounded this good, I would be living in Paris right now going by the name Pierre”.

If Livia Blanc had a superpower, what would it be?
Healing power. It might sound a little cheesy to want to save the world. Ours has never needed it as much as it does right now. 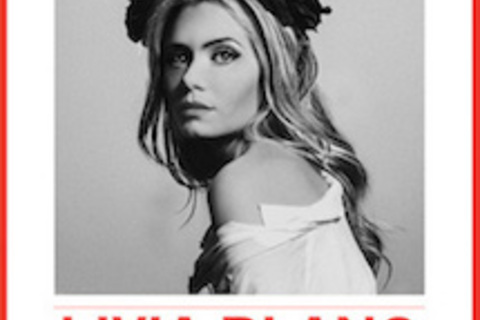