The songwriter for Rihanna, Eminem, and T.I. takes the glittery stage on Wednesday, January 17th to play stripped-down versions of her hits. Get to know Skylar Grey in her interview with our East Village music maven, Annie O, below.


ANNIE O: Where are you based now?
SKYLAR GREY: I split my time between the Napa Valley (where my boyfriend lives) and Venice, CA.

You've had major success as a songwriter and collaborator with artists like Macklemore, Eminem, and Rihanna. Were there any OMG moments on stage or otherwise that really blew your mind?
I’ve had a lot of OMG moments! But most recently, getting to sing ”Stan” with Em on SNL was literally a HOLY SHIT OMG moment.

You've said your forthcoming LP is coming home for yourself. What can we expect that to sound like?
I’ve been inspired by so many genres over the years that have influenced my ever-shifting sound... but this time I’m fully taking it back to my roots: ’70s folk music like Fleetwood Mac and Joni Mitchell—the records my mom used to play on vinyl when I was a kid. I’m focusing on a timeless, classic songwriting style, in which the songs could be impactful whether performed acoustically or fully produced.

Do you have a different approach when writing for yourself as opposed to other artists?
Sometimes. I always try to write about an emotion that feels true for me, whether a current moment or a reflection of the past. However, sonically all artists have a different thing they are going for, so I try to push myself into that artist's realm when it comes to melody, tone, and delivery.

What's your favorite memory from touring?
Again, so many good memories... touring as the opener for Bruno Mars and featuring with him every night during his set is up there, but what really comes to mind is the time someone stepped on some cables backstage and unplugged half my band, so I was forced to finish the show acoustically. Sounds scary, but my fans were so supportive of the situation and it really made me feel like the audience was my best friend, which made the performance so fun. It also reminded me of how powerful a stripped-back performance can be, versus tons of production and big, loud subwoofers.

Are there any tracks by other artists you currently have on repeat?
“Daydreaming” off the latest Radiohead album A Moon Shaped Pool is always on repeat.

If Skylar Grey had a superpower, what would it be?
I already have the superpower I want—I can create my own destiny. This world is such a magical place and I really believe we can do or be whatever we want. I’m living proof. When I was 13, I dreamed of working with Eminem, so tell me, is it just a coincidence that this small town Wisconsin girl appeared on stage with him a decade later? No…that’s a superpower.

What can we expect from your show at The Standard?
I’ll be playing stripped-back versions of songs I’ve written for other artists that many people will know, as well as a couple new things. It will be just me in the raw.
Previous Next 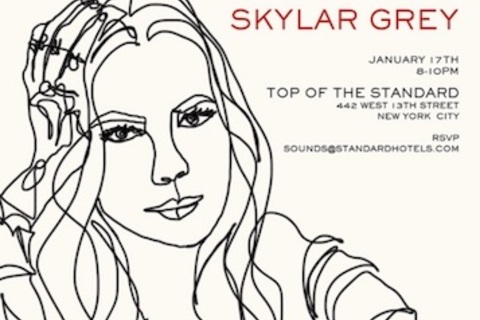