The staff meal or family meal is an essential part of the well-being of any restaurant, kicking off the first of the Standard Staff Meal series—we invite Dalad Kambhu chef owner of Kin Dee Berlin (which is already renowned in the Berlin food circles for having one of the best staff meals) to cook a meal for the staff of The Standard, East Village while discussing everything from diversity to being an Asian with a Michelin star, from the smell of meat to what food she would be, if she were food.

As my cab pulls in front of The Standard East Village, I see Berlin-based Kin Dee’s chef and owner Dalad Kambhu; smiling widely walking next to her mother, who has just flown in from Bangkok to see her. That evening the young Thai chef had been honored as one of Bulgari’s Iconic Women of Design and had cooked an intimate dinner for the event. The timing is doubly important because of Kambhu’s recent one Michelin star for Kin Dee, which is just over two years old. Humbled by the recognition, Kambhu recounts her first important lesson that she learned upon moving to New York over thirteen years ago. Her first restaurant experience led her to understand that you show how you care for people through your meal. Since then, she garnered a well-rounded, non-traditional education at various kitchens, restaurants, and through artist friends around the city, and, after a decade, took a leap of faith right into Berlin’s burgeoning fine dining scene by opening a contemporary Thai restaurant with longtime friend and artist, Rirkrit Tiravanija. The common thread you will find in all of Kambhu’s experiences represents her to the core–a demonstration of genuine care and a lightness of touch, from the food to her engagement with those whom she serves.

Picking up the meat carefully and bringing it to her nose, she confirms, “U.S. meat always smells differently.”

Her food is evidence of her care. This applies to her all-female staff at Kin Dee, too. The staff meal is considered an integral part of the well-being of the restaurant. And hers, not surprisingly, holds a famous reputation within Berlin food circles for having one of the best staff meals. Among the most legendary are her crispy Thai omelettes, converting leftover cut vegetables inside billowy cooked eggs and served with a signature Thai dipping sauce–usually garlic and chili that are either smashed or roasted together. Other favorite shared meals include her family-style pots of fiery curries, to be poured over generous servings of rice amid close-knit conversations. Her staff is her family, after all. It’s no surprise then to discover that the guest chef had decided to cook curry as her off-site staff meal of choice for the The Standard, East Village. She explains that curry is something that she likes to eat often, and this is how she plans for her own restaurant, asking herself, “what would I like to eat?” For her staff meals, the requirements are slightly different than the dishes she serves to her guests. The staff meal needs to be easier to make, but nonetheless homier (and perhaps even spicier), while not letting anything go to waste. It’s also a time for the staff and her to experiment new dishes and share feedback. She mentions that for one of last year’s staff meals, they ordered two kilos of clams to try out a new dish that involved salting them with chili paste and Thai basil–they will be adding this dish to Kin Dee’s menu next month. While some restaurants serve their staff by reheating frozen foods to save time, Kambhu stands by her position of feeding her staff with quality food twice a day. “We don’t need to make something ultra nice or luxurious, but if we are going to eat it, we have to make it good to eat,” she explains.

"I always try to remember that diversity is something you need to check yourself. I make sure that my staff isn’t all privileged people."

In The Standard, East Village’s kitchen, Kambhu prepares ingredients for one pot of beef curry and one pot of vegetable curry to feed 75 hotel staff members for their 4:30 pm service. As she navigates the kitchen, she jokes with the lady cutting vegetables and Max Blachman-Gentile, The Standard, East Village’s recently appointed Chef de Cuisine, who creates magic in the form of artisanal breads and chicken fat. Kambhu is wearing rain boots and chef whites. As casual as she appears, Kambhu always travels with her knives. Her cutting style is a careful, poised movement with pauses to dab the wetness with a clean napkin and check on the progress of the vegetables. The beef is cut into generous bite-size pieces and placed in a pool of sesame oil to be marinated. Picking up the meat carefully and bringing it to her nose, she confirms, “U.S. meat always smells differently.” Working in Berlin offers access to different products, but Kambhu manages to adapt to her environment with ease, naturally. It was only three years ago that she moved to Berlin. Since moving, she’s confessed that her inspiration for cooking rarely comes from her memories anymore, which felt more like “an old battery that was giving fuel,” but replaced by her passion to create constantly, work with excellent produce, and explore other great chef’s works. Her recent visit to Copenhagen was especially memorable, and she prized the city’s efforts for their simplicity–namely at Restaurant Relæ and Noma. The newfound excitement reminded her somewhat of the phenomenal energy she felt after trying Will Goldfarb’s innovative restaurant Room 4 Dessert when she had first moved to New York City from Bangkok in 2006. In Berlin, Kambhu is also an active member of the Feminist Food Club, where women in hospitality meet to discuss topics and offer support for each other. “Feminism should be intersectional,” she explains. Noting the rare Michelin star awarding to a female Asian chef in Germany, she adds, “the only thing I wish had been different was that, unfortunately, I was the only woman who received a Michelin star, and I hope there will be five of us standing there next year.” She hasn’t had time to celebrate her Michelin star, though, and instead delved straight into how to keep it for the next ten months. Her plans include giving more opportunities to women of color, refugees, and people who have just moved to the city. “I always try to remember that diversity is something you need to check yourself. I make sure that my staff isn’t all privileged people,” said Kambhu. “I think a great role model is chef Angela Dimayuga [creative director of food and culture at The Standard]. She’s so awesome and she put in her time when she was a chef [at Mission Chinese]. The girl can cook, and she isn’t just taking glamorous photos. If you want to be a good chef, you’ve got to put in the hours. What I want to tell women is; do the hard work first, put in your integrity, and own it fully. Own your accomplishments, but also your mistakes. I try to own it every day,” concludes Kambhu as her beef dissolves into warm, tender shreds in coconut milk. Is there a soundtrack to your kitchen?

I always open hip hop. Old school ones–from Tupac to a bit of Snoop Dogg. I grew up with it. Or I put on random jazz.

If you were a food, what food what you be?

I would be a Thai dipping sauce–the one that is really spicy and with a very strong paste flavor or fish sauce. I can be dipped by fresh vegetables and eaten with rice. And not everyone can handle me. 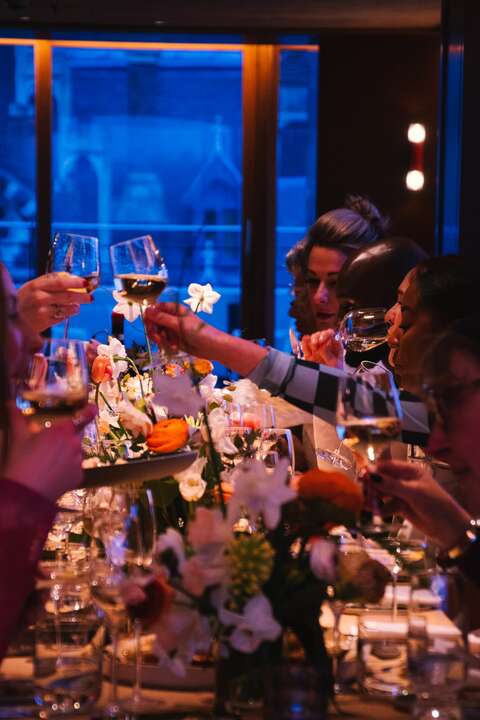