In "Three Sheets to the Wind," we invite a noteworthy subject over to The Standard for a conversation over three drinks. Apparently, the expression was coined because when you’re sailing a ship, three sheets (sails) makes things go…off course. Which happens to be our idea of the perfect conversation!

With Fashion Week sailing into New York, we sat down in that legendary room, The Top of The Standard, with CFDA-endorsed designer Thaddeus O’Neil, who broke into the fashion world with his surf-inspired creations after detours as a philosophy student, model, surfer, and photographer’s assistant. O’Neil and Standard Culture’s assistant editor, Elena Feldman, ended up having a few sheets before the official three sheets began, and they sailed astray. 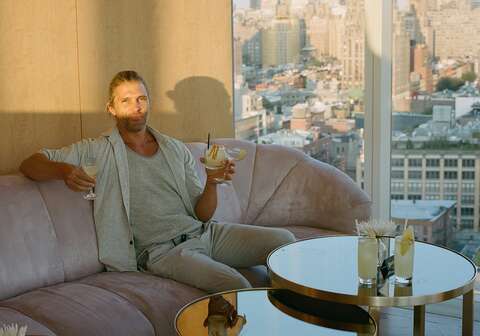 Is this a date?
Yeah, we’re clearly on a date. Hello?

Great. What’s the story behind your name?
Nothing crazy, my mom always just loved the name.

Are you super Irish?
I’m definitely Irish. Dad’s Irish German, Mom is Swedish, Welsh, and English, so classic American mutt. I wonder if Trump’s wall will exclude the rest of the entire world, because I really wanted some Mexican in my lineage and that could potentially be ruled out.

What were your summer jobs growing up in Long Island?
I started out mowing lawns when I was really little. I would mow at a rice farmer’s pace, because I didn’t want to kill any frogs. I tried to work in a restaurant and was a terrible waiter. I liked to talk more than I liked to actually bring people what they ordered. And too many days off for waves. That never went down well.

I read that you got your start in fashion as a model because your Fire Island neighbor, Bruce Weber, shot your family portraits when you were a kid. What was it like having Bruce Weber as your neighbor?
With Bruce, it became a thing where embraced you into this whole other world, so it became not a neighborly world but a whole different fashion world. He started taking pictures of my sister and my father first, and then eventually me, too, so you were always invited into these creative imaginary worlds.

As someone who clearly has a brain, did you ever bristle at being bossed around as a model?
No. A lot of the male models I work with now for my own brand, they’re smart guys, and that’s who I try to work with for everything. Girls and guys. Just really smart, spiritual people.
After modeling and assisting photographers, it seems like one day you just decided to pick up fashion design. Was that really the case?
Yes and no. My mom reminded me that I’d make her photograph me in my outfit every morning before school. And then, it wasn’t just that I leapt into it. I had been informally making pieces for myself for a while.
Diana Vreeland once said, “I’m really only envious of one thing and that’s a surfer.” Why do you think the fashion world loves surfers so much?
I love that quote. [Surfing] is a really strange preoccupation, and without getting campy and weird about it, it's a sublime thing to watch a human being, guy or girl, riding a wave. You can meet someone from Idaho walking down the beach in Hawaii and they’ll be completely mesmerized aesthetically by what they’re seeing. You can’t say the same thing for baseball or football. Surfing sort of transcends all that. It’s aesthetically moving in its own right. There’s no logic. It’s a purely beautiful and sublime thing to watch.

After you started your menswear line, Anna Wintour encouraged you to do womenswear. When Anna Wintour tells you to do something, do you have to do it?
You don’t have to do anything, but it’s a significant prompt when someone like Anna says that. I responded to that because I really like an adventure, so I was like "I’m up for this. Let’s do it."

What’s something every man should steal from a woman’s closet?
I always stole jeans from my mother and sweaters from my sister. I’m sure you could do underwear, I didn’t do that, I was happy not to wear any.

Finish this sentence: A designer should never…
Think too much.

A surfer should never…
Think too much.

How many drinks is it going to take to get you drunk?
A lot. How many drinks does it take for you to take your shirt off?
[Laughs.] I don’t know! I have not got there often.

Ever been thrown out of a bar, club, or restaurant?
Yes.

Most memorable psychedelic experience?
This is on the record! [Laughs.] They’re hard to enumerate. I’ll just say this—I try to keep them educational. Spiritually educational.

What’s the most impulsive thing you’ve ever done?
Ask my present wife to marry me, which she did, after the second request.

What happened the first time?
She said no, because I had only known her about a week. So then I asked her two weeks later and she said yes.

How did you guys meet?
We met on a job. I was living in Sydney at the time and working for photographer Richard Bailey, and my wife was the model. The first time we ever laid eyes on each other, it was kind of just like “diiiiiing!” Love at first sight. And she hasn’t divorced me yet.

Have you ever surfed naked?
Yes, of course! It’s liberating.

What’s something about the fashion world that you wish you could change?
There’s lots really. Unfortunately fashion requires a lot of waste. That’s something that we’re going to have to deal with. I also think fashion at its best moments is when it’s really romantic, antagonizing, spiritual, and sexy, but whenever it delves too deeply into one of those channels, it's boring.

Secret talent?
I can juggle pretty well, which is lame. It's something I did to just calm myself during writing papers and stuff like that. I have a pretty good hidden talent for scavenger fashion. I like to go for long beach walks and make up outfits from the trash on the beach.

Do you have any regrets?
Regrets are the best. Fuckups make you humble. Yeah, tons of favorite regrets.

Can you hear me right now?
[Laughs.] I think I’ve been responding alright. What’s your morning routine?
My wife and my boy, Cassius, sleep in. So I wake up, make coffee, and try to get the dogs walked quickly. I have two dogs, Hemingway and Shirley. Hemingway looks like a grizzly bear slash Chewbacca from Star Wars. He’s like 120 pounds and I’ve been living in the East Village for 6 years and every time I walk him someone stops me to ask me what he is. I’m just like “He’s a Chewbacca. You saw Star Wars right? This is the real one.” And then I come back and make my son breakfast, feed him, have a little chat, take him to school, and then go to the studio.

If you could trade hair with anyone who would it be?
Sinead O’Connor. Shaved head. Before I had long hair, I always had a shaved head.

You moved to New York City to be with your wife. Where wouldn’t you have moved for her?
There’s no place, right? Oh well, I do need to be near an ocean, that’s one thing. I haven’t been put to that test yet. You’ll have to get back to me in the next "Three Sheets to the Wind."

Is your son named after Cassius Clay?
Sort of, yeah. I really just like the named Cass. I wasn’t trying to repeat the classical Romanness of my name. It just felt like a good way to get to Cass.

What’s something you want to pass down to your son?
Respect for nature, respect for women, and just love for humankind.

What’s your parenting philosophy?
Just trying to be a guide, because you don’t own these people.

What’s the last natural phenomenon that moved you deeply?
I was in the Japanese equivalent of a deli having breakfast and watching Hurricane Sandy ravage New York.

What is your Achilles heel?
Probably tequila.

We’ve entered an era where genders are blurring. How do you think gender roles will be different 50 years from now?
I think gender has kind of asserted itself at different times. In terms of dress, I still think we have biological…I’m biased. I respond to a woman in a dress more than I respond to a man in a dress, let’s put it that way. Gender’s always something we’re infatuated with. They’re in this constant play. So I think the game is always going to continually evolve and we’re all bystanders and participants, and gender is clearly a game to be played.

Oh geez, the sheets are hitting me hard.
[Laughs.] That’s good! I need another sheet.

We’ll get you one. So what do you want to accomplish in fashion?
It’d be nice to be a part of the conversation, which is what I want to do. It’s the Samsons and the Davids that are actually saying something really interesting, and it’s easy for that true voice to be thrown out before they get a chance to really express it. I think social media will maybe change things, but we’ll see.

You freakin’ did it! Look at you!

30 Rock.
I’ve never heard that before. I guess being culturally obtuse has its privileges. [Laughs.] It was fresh. It was a challenge.

Let’s get you another drink, shall we?
You should try what I was drinking, the Getaway Driver.