There are few better ways to get to know a human really quickly than over a few drinks. Introducing “Three Sheets to the Wind,” a new feature in which we do just that.
Matthew Hitt is someone to keep your eyes and ears on this year. Not only is he a model slash lead singer of 4-piece post-punk band Drowners, he’s maybe possibly definitely dating on-again, off-again girlfriend, Ms. Fifty Shades of Grey herself, Dakota Johnson (they were photographed at our Met Gala afterparty together). Drowners are set to release their new album On Desire June 24th, and rather than ask Hitt the typical questions, we attempted to extract some candid answers through an age-old journalistic technique: day drinking. It's the first installment of a new series we're calling “Three Sheets to the Wind.” We dispatched intrepid assistant editor Elena Feldman to The Standard Grill, and over 1, 2, 3 Near Sides (a bright pink cocktail comprised of vodka, grapefruit, Campari, and prosecco), they bypassed all the niceties and got right down to the business at hand. ELENA: First question. Is this a date?
MATTHEW: No.

Are you sure?
Yes.

Ready for the new album to come out?
We finished recording it on Christmas Eve so we’ve been sitting on it for six months. We wrote all of it last year after we finished touring.

What do your parents think you do for your career?
I’m not sure what they think I do, but I know that my dad stalks everything to do with the band. He’s our number one fan.

Which is harder: modeling or playing in a band?
Modeling.

Why?
Because it’s awkward. I don’t like to have my photo taken. But I like playing guitar.

What pays the bills: modeling or playing in a band?
Modeling.

How did you become a model?
Someone came up to me in Times Square about 10 years ago. I was outside Virgin Megastore. It was my first night in New York.

How do I get discovered by a modeling scout?
You’re not with an agency already?

Is being dead a plus or minus as a musician?
[Laughs.] It’s really hard to play music after you die. I think being alive is better for the creative process.

Dream backing band?
All of the Ramones. You gotta chug your drink.

Right you are. Cheers.
*Clink*

What’s the craziest thing a fan or groupie has ever done other than this interview?
[Thinks for a while.] I don’t know! We’ve never had anyone break into a hotel or anything. We were briefly stalked at a hotel in Brazil, so that was kind of weird.

Do you have a huge fan base there?
Apparently. We’ve only been there once, but there was a bunch of kids waiting at the airport for us and I was like “Are you sure you’re not here for someone else?”

Favorite song of all time?
“Tears in the Morning” by the Beach Boys. We should finish our first drinks.

Okay cool.
[Writer’s note: We both finish our drinks.] 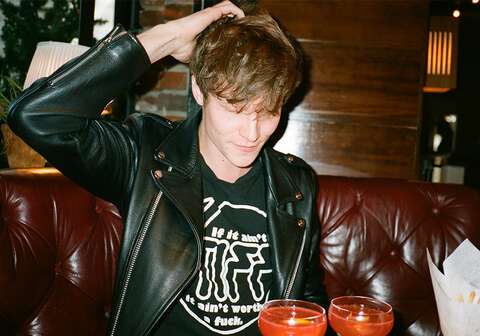 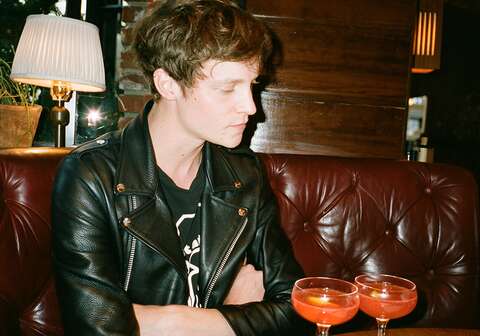 Here we GO. YES.
I’m feeling fresh. What are we drinking?

It’s the Near Side.
It’s good!

What do you like to do when you’re drunk?
Dancing. It’s the only time I dance. My limbs are too long.

What happens when you dance when you’re sober?
I just can’t do it.

But you’re a model and you’re on stage all the time.
Yeah, but I’ve got a guitar or a mic stand to lean on. I’ve got a prop.

So when it’s just your limbs flailing…
I look like tickled spaghetti.

Have you ever been thrown out of somewhere?
No, I don’t think so. I’m not really like a rowdy drunk. I just turn into a Chatty Cathy.

Cool, keep drinking. Have you been arrested?
[Laughs.] No.

Favorite drug?
I don’t do drugs.

What’s the most embarrassing thing you’ve been caught doing?
[Laughs.] Taking a selfie.

What is the greatest risk you’ve ever taken?
Moving to America.

Have you ever used Tinder?
No.

Do you have a secret talent?
I can click my tongue really loudly.

Do it now!
*CLICK.* [Writers note: THE LOUDEST CLICK I’VE EVER HEARD. People look around the restaurant wildly confused. We both laugh for approximately 6 seconds.]

YES. What’s a talent you wish you had?
I wish I was a better piano player.

Do you play any piano?
Yeah, I can like fumble around with some chords, but my best friend from college is a really good piano player. We were at the Ritz in London for some fashion party, and there was a piano in there, and as everyone was leaving, he just walked past it and bashed out like 8 bars of Mozart and then left. And I was like “Fuck! I wish I could do that.”

What did you think of Beyoncé’s Lemonade?
I loved it! I watched it at my friend’s house on HBO when it came out. My favorite part is when she’s like, “If you try that shit again, you’re going to lose your wife.” And she throws her ring at the camera. And me and my mates were like “OHHHHHH SHIT.”

Alright, that’s it for drink number 2 and we are behind. 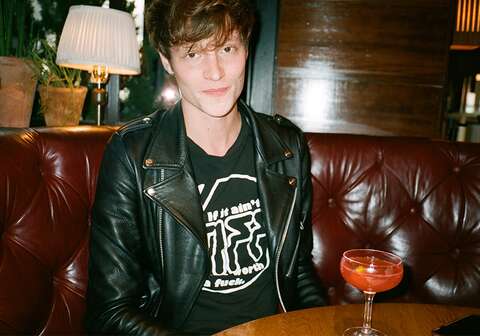 Whew! That gave me goose bumps. This is a really sneaky interview technique. I’m going to spill the beans now.

Perfect. So other than the facts that you laid out for me earlier, why do you live in New York?
Well, I wanted to come here for the teenage boy reason, which was that I was obsessed with Catcher in the Rye. But I think once you live here, you get spoiled and can’t function anywhere else. You’d move somewhere else and be like “Why can’t I get sushi at midnight on a Sunday?”

When you go back to Wales, what’s that like?
I don’t really go home that much, maybe like once a year, so I quite like it. I’m from the valleys, so it’s just mountainous, rural, and quiet. Except I get made fun of when I go home.

Why? Are they like, “City boy’s back!”
I guess I got a weird haircut and my jeans are too tight. Those are the usual criticisms.

How many leather jackets do you own?
I own 3, but I had one for like 10 years, and I have one that I don’t wear.

Why don’t you wear it?
It’s slightly too big. I tried to sell it at Tokio 7 but it’s got a paint stain on it so they wouldn’t take it.

Hairstyle or clothing trend you regret trying in public?
I was 13 during the emo explosion.

Oh no.
And as my passport photo testifies, I tried to bleach my hair, and it went yellow, and then I dyed it black, and I had, like, an asymmetrical mullet. It was short at the crown and had a big swooping bit. I regret that.

What’s your Achilles heel?
I don’t have one. Nothing can destroy me.

What’s your favorite indulgence?
Getting massaged.

Prized possession?
I won at an auction for charity a signed Richard Burton photograph. It’s at my parent’s house. My dad was at this auction and I’m obsessed with Richard Burton and he told me there was this signed photo so I wired him 500 pounds and I was like “That’s my top bid” and I won it for 425.

You saved some money!
He still hasn’t sent that 75 quid back, but I do owe him my entire life, so he can keep it.

How are American and Brits and different?
Accents. Familiarity with coins.

So…uh…did you see Fifty Shades of Grey…
Oh man. We were having such a nice interview! [Long pause.] No.

Are you sure? Like after that whole time, nothing changed for you?
I’m slightly drunker than I was when I sat down. Is this what you do for work?