Lately, our Texan pals at Bunkhouse have been inviting some friends of their own to play at our Wednesday night Desert Nights series at The Standard, Hollywood. On August 10th, it was the country-folk crooner Robert Ellis. His Instagram bio reads: "Lost in space. Stranded here," and we're pleased as punch that he landed at The Standard, even if it was just for one night. (His bio also reads "Nudes," but we digress.) After what sounds like a hell of a couple years of soul-searching, risk-taking, and troublemaking, Ellis emerged with the batch of songs that became his self-titled album. You can hear every bump and bruise and revelation of the this journey in his words, and he showcased the album for a transfixed crowd. The Standard sat down with Robert before he took the stage and got some incredible glimpses of life on the road and a near-death tale for the ages. What are your favorite Paul Simon and Randy Newman deep cuts?
Well, since you bring up both of them, on the Randy Newman record Trouble in Paradise, there’s a song called “The Blues,” and Paul Simon sings the bridge. It’s maybe not my favorite song, but just the fact that both of them are on it is pretty special.

So you clearly love a sharp suit. Tell us about your favorite one.
I think my favorite suit is my space cowboy suit. I got it made by this guy Jerry Atwood—his company’s called Union Western, and he lives in Indiana. My friend Texas Joe is part of the company, and he reached out and was like, “We want to make a suit for you. What do you want on it?” And I was like, “I don’t know—maybe something Houston-themed. Oooh, outer space—make it outer space.” He sent me back this suit with all these fucking rockets and rhinestones, and it’s my favorite thing I’ve ever owned. It’s beautiful. We saw that you traveled to India—cowboy hat, cowboy boots, and all—last year to record. How did this culture clash influence your songwriting?
I don’t think there’s much harmonically or lyrically that is India-influenced, but I did almost die a couple times. I went there with my friend Jonny Fritz. Jonny and I—we’re very similar. We’re best friends. We’ve spent a lot of time traveling together, and one of things we have in common is when we get down or depressed, we tend to do something really extreme to try to pull ourselves out of it, to try and shock our minds into waking up and being present. When we got to the hotel, the hotel guy said, “Don’t try to swim across the Ganges River.” I hadn’t even thought of it. He said about 11 people a month die trying to swim across. The current’s super strong, and it’s really wide, and people just get swept up, and they drown. So, of course, we woke up depressed one morning, and we looked at each other and were like, “Let’s do it. Let’s swim across. It doesn’t matter. What’s the worst that could happen?”

So we made it across one way, and it was very difficult. Once we got to the other side, we jumped off this big rock, and we were having a blast, and he was like, “You know, we have to go back because our clothes are on the other side, and if we walk, it’s going to be a day’s walk just to get to the bridge. We have to swim back across.” On the way back, maybe three-fourths of the way (we’re not particularly strong swimmers, either—I don’t know why we felt we could do this), I just looked at Johnny and was like, “I’m not going to make it. I can’t swim anymore.” I was treading water, and I was just like, “I’m so exhausted,” and I just sort of went under. At the last minute, I caught a rock—not before I had gulped a couple gulps of Ganges water. And the Ganges River is, like, the most polluted water on Earth. So I pulled myself up to the shore. I laid there for a minute, went home, and took a nap, and then a few hours later, I woke up the sickest I’ve ever been. I went to a “doctor.” This is just a guy in the village we were in who had access to medicine. It was a shack on the side of the road. I was fucking dying at this point, and I walked in and told him what happened. He gave me a paper bag of unmarked pills and said “Take these” with no instruction. Over the next couple days, I took the pills, and I started feeling a little better. The color came back to my face, and I felt a little better. Then a week later, we were in another hostel with these German twins who were staying across the hallway, and I was talking to one of them, and she looked at one of the pills and she goes, “This is a course of antibiotics, and you have not finished it. This is very bad because you will be sick again.” And sure enough, on the flight back to New York, I started feeling a little ill, and then when I landed, it came back way worse than the first time.

I was very, very sick for about a month, and I think it took me a while to emotionally recover. It kind of shattered me to my core, being that sick. You know when you’ve been in a car accident or something, and every time you see something in your peripheral, you kind of jump? For a little bit, that’s how it felt. But eventually I leveled out again.

So all that is to say that although the culture didn’t influence the music, I hit the most isolated, loneliest place I’ve ever been, and that definitely left me with this resolve about what I could and couldn’t do. After you experience something really terrible, everything else lines up in your perspective. You’re like, “Well, this is not as bad as anything close to India.” And with making a record, you feel untouchable in a way. Say nobody likes it, the label doesn’t like it—nothing really is anywhere close to feeling like you want to die every second for a month. I’m fine now, but it took a long time. 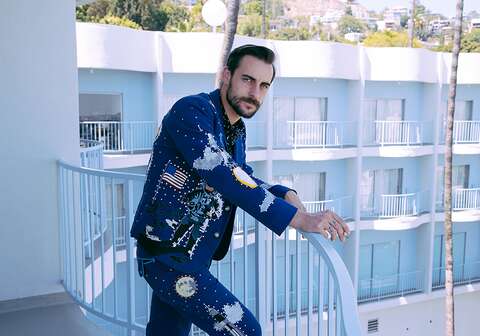 We read you’ve been crashing at your friends’ places in New York and Austin. Do you have plans to put down your roots anywhere?
I just got a place in Austin. I’ve been on tour since May, and I got this place in the middle of the tour, and I still haven’t been there. It’s August now, to put it in perspective. After this show tonight at The Standard, I’m going to fly back to Austin and get some furniture, hang some wall stuff, and I’ll have a place to live. It’s been two years. This sounds really simple and commonplace, but I kind of want to get a ton of shirts and have a set of clothes that lives at my house that I don’t take on tour.

Where can you find a little bit of Texas in NY and LA?
In New York, Skinny Dennis and The Levee are super fun. Really good bands play there, and I’ve had many very drunk nights two-stepping there in New York. If you want to get barbeque, Hill Country Barbeque in Manhattan is pretty awesome. I find myself going there all the time, even though there’s, like, every kind of food in the world at my fingertips.

In LA, I think most of the people who come out here come to get away from wherever they’re from. Everybody’s sort of assimilates here; they become part of the Los Angeles aesthetic and lifestyle. I have a lot of friends who have moved out here that go back to Texas, and things they have lived with their whole lives they all of a sudden can’t handle because they get used to what it’s like to just be comfortable What’s your favorite jam to play on the penny whistle?
I’m still learning it. The reason I bought that thing was I was pretty down and depressed in Seattle while on tour with Deer Tick. John [of Deer Tick] got super into the penny whistle, and he was playing it on a couple songs. I was like, “Fuck, I want to do that. I want to learn how to play Irish songs on it.” So I was in this store super hungover, and I bought the penny whistle and a companion book with a CD of songs to learn, and then over the next few days that sort of pulled me out of my depression that I was in. I was just playing that thing nonstop. You can’t not laugh when you hear the pitch and tambour of that instrument. It’s, like, super high. The first song I learned to play was the theme from Titanic—just because it kind of fell into my hands, but I want to learn Irish songs. I want to learn how to play a bunch of jigs. I think that’d be really funny.