To commemorate the launch of Standard Time, our new service that lets you choose your own check-in and check-out times, we decided to check-in back where it all began in 1999: the front desk of The Standard, Hollywood. From the jump, our front desk sent a signal that The Standard was doing things…differently—hence, the glass vitrine, complete with rotating art installation and live model. We sent intrepid LA writer Alexander Kreger to experience the magic of the front lines firsthand and report back.

4:00pm: My tenure at The Standard begins when I introduce myself to the two notably attractive people manning the front desk, Jordan and Zoë. “Oh! Well, we,” Jordan announces, “are the Beyoncé and Jay Z of The Standard, Hollywood.” He pauses: “I’m the Beyoncé, she’s the Jay Z.”

4:04pm: A dead ringer for Kylie Jenner plants herself in the dead center of the lobby to take selfies in front of the minimalist cactus display. Incoming guests reroute their paths so as not to disturb the photoshoot.

4:08pm: I’m met by Jon D, director of guest experience. Jon’s job is to know who is checking in when, so he can ensure they have the best stay possible. He offers to take me on a quick tour. 4:12pm: Out on the pool deck, my eyes flit compulsively from one beautiful guest to the next, from the crystal-clear pool to the plethora of native plants. “So, yeah, the pool is really nice,” Jon admits bravely.

4:32pm: Back at the front desk, my eyes are drawn to an extraordinarily distinguished guest in black reclining sleepily on the couch. “That’s Sage.” John D says. “She’s always there.” I quickly make my way over to her. She lifts her head slightly before rolling over to expose her side, which I proceed to scratch vigorously. Sage is a dog. Sage and I are in love. 4:36pm: After concluding the tour, we reward our hard work by returning to the pool for a drink. “We’ll have two glasses of the frozé,” Jon tells the server. Frozé: a portmanteau of “frozen” and “rosé.” I have never felt closer to God.

5:06pm: Pleasantly buzzed, I return to the front desk. To my delight, I overhear Zoë speaking hurriedly into a walkie-talkie: “What do you mean she’s naked!? She’s supposed to be checking out!”

5:16pm: Zoë’s gives out sightseeing tips to a couple of guests. “I’d definitely try to go to the Griffith Park Observatory around sunset. There won’t be as many tourists and the sunset will be beautiful.” A+ advice!

5:18pm: Sage is gone from the couch—didn’t even bother to say goodbye. Heartbreak. We’re over.

5:30pm: A woman checks in with a chocolate lab. Forget about Sage. This dog is the dog I love. And he loves me.

5:31pm: Sage was just out for a walk with her owner. Now that Sage is back, our relationship is back. 6:02pm: Jon summons me for a drink at Alma. This time, we forego the frozé for the chilled variety, and Jon fills me in on his 15-year history at The Standard. Some of his relationships with hotel guests go back just as long. He has watched children age into adults, and store managers become CEOs of international brands.

6:18pm: A woman wanders into Alma complaining of a sore throat. Jon leaps up to get some chamomile and lemon. After she leaves, he identifies her as the head stylist of a major British fashion magazine.

7:14pm: An important-looking woman approaches me and asks if I’m someone named Christopher. “I’m whoever you want me to be,” is what I wish I’m saying as I politely reveal that I am not, in fact, Christopher. 7:41pm: A man in a thigh-length black T-shirt strides into the lobby, his boots clacking loudly across the floor. Jon D whispers, “See that guy over there? He’s a really famous singer in Australia.” I’ve heard that one before, Jon D.

7:49pm: With the lobby empty, an impromptu sing-along of “Drunk in Love” led by Jordan breaks out behind the front desk.

7:59pm: A model arrives to take her place inside the glass box that overlooks the lobby. She slinks inside, and once in a comfortable reclining position, she puts on headphones and pulls out an iPad. She will maintain this aloof posture for the remainder of the evening. I bet she’s watching Gilmore Girls. 8:18: A beautiful human male and people who are clearly in his band stroll to the front desk to check-in. What is this feeling I’m feeling? Is it hot in here? I overhear his name, then casually go to the other side of the lobby to read the receipts, a.k.a. watch all of his music videos.

8:23: Realizing that it’s been eight hours since my last meal, I duck quickly into Alma for some dinner. One delightful order of chickpea fries and grilled octopus later, I’m feeling alive.

8:49: I'm trying to listen in on some more of Zoë’s guide to the city, but all I can hear is, “It’s kind of a hipster spot.” The guests’ eyes light up. They’ve just found where they’re going tonight.

9:01pm: Overheard in the lobby: “Girl, Marc Jacobs is NOT Valentino.”

10:00pm: Alas, my tenure at The Standard, Hollywood, has come to an end. The Kylie lookalike has reappeared, six hours later, for another round of selfies in the exact same place she was before, and it feels so right. I exchange hugs with my new friends and promise I’ll write. As I walk out to the valet, I think about how Jon D couldn’t have directed a better guest experience if he’d tried. 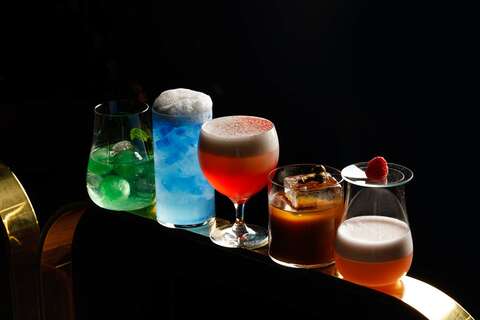