Everyone knows Frieze begins before the booths are hung and the big tent opens. Parties are imperative all week long, especially for our jet lagged friends visiting from across the pond. On Monday night, Pilar Corrias hosted a party on the 10th floor for the painter of the hour, Tschabalala Self – the latter arriving in a show-stopping dress of seasonal auburn, while the former remixed the art world uniform of ‘all black everything’ with a leather cummerbund and gothic blooms. In spite of everyone’s start-of-the-week composure — think Hans Ulrich Obrist in a cardigan, demurely shaking everyone’s hands — professional inhibitions soon loosened up. “I think I just saw two people snogging in the corner,” said an anonymous curator, her cheeks flushed. “How old-school!” This year, the Standard London was at the epicenter of all the air-kissing, champagne-sipping, and antics after-hours. Take the red pill elevator up with us to see what went down...
On Tuesday, we took a field trip to see our friends at 180 the Strand for the opening of Transformer: A Rebirth of Wonder, where we sipped neon-hued cocktails and basked in the otherworldly environments created by an all-star lineup including Donna Huanca, Juliana Huxtable, Korakrit Arunanondchai, and Jenn Nkiru. As the evening wound down, Arunandondchai herded up his friends and collaborators and took them back to — where else — the Standard, ordering round after round of sharp martinis and icy margaritas in the Double Standard bar. “The art world sort of follows Murphy’s law,” said one gallerist, who had flown in that afternoon from Dubai. “Everything that can go wrong will go wrong — but being here feels so right.” By Wednesday, a premature hangover already had us reaching for the Standard Full English (extra hashbrowns, please). The fair opened to VIPs, transforming instantly into the vast arena where “talent, status, ambition, and greed duke it out,” as art critic Dave Hickey once wrote. Attendees saw double in the The Standard, London Library Lounge at Frieze, as a faithful copy of our library set the stage for all manner of stimulus over the course of the fair. The program included Joe Sweeney’s Brexit-themed screening; Hettie Judah, Faye Wei Wei, and others speaking on the power of female creativity; and Nkiru and Arunanondchai discussing music and “cosmic archaeology” with sharp-witted editor Andrew Durbin. Meanwhile, a lively conversation between Akinola Davies and Martine Syms, moderated by Angela Dimayuga, kicked off our Standard Talks program back at the hotel. Thursday brought us Pun’s, a brand-new party hosted by none other than Ivan Pun, scene-stealer and scion of Southeast Asia. Inspired by Wong’s, the infamous dive bar of Bangkok, the night saw the Standard’s 10th floor blending Thai, American, and British influences into a real cosmopolitan utopia. Dancing to raucous hip-hop spun by DJ Alex “Baby” Turnbull — later joined by Ash Ghazali for an impromptu Crazy Dope Asian$ cameo — partygoers savored highballs poured with Thai moonshine and ruby-red guava nectar. Flashes went off all around us, capturing guests of honour from actors Zhu Zhu and Rose McGowan to Princesses  Eugenie of York and Alia Al-Senussi  In spite of the formidable guest-list, the mood was warm and bright with close friendship: designer Lara Bohinc, stylist Susan Bender, and art advisor Rachael Barrett piled on the bright velvet couches together, while Pun and his squad flitted through endless cliques of international pals, including globetrotting PR/collector Jonathan Cheung, Self Portrait’s Han Chong, art dealer Rob Sheffield, and Ozwald Boateng OBE. 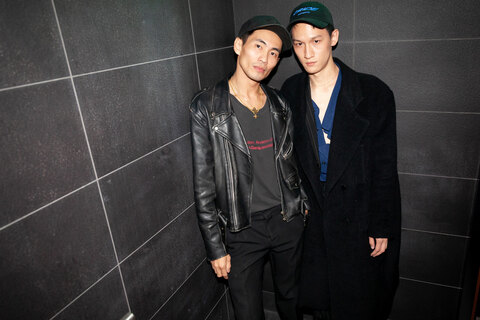 On Friday, we prayed to the liver gods and took the red pill up once more — this time, for the storied Art Review party, hosted this year in the Standard’s 10th floor bar. “It’s like we’re in an entirely different space every time, don’t you think?” said VP of Branding Chomwan Weeraworawit, as polished techno reverberated the floor-to-ceiling windows and a new crop of guests — including designer Tremaine Emory, Dazed founder Jefferson Hack, and singer Kelsey Lu — flooded in. As everyone jostled at the bar for a taste of the night’s cocktails — a Belsazar Rosé & Tonic, bright with half-moons of grapefruit, or a Belsazar Negroni Maguey, spiced with tequila and vivid Campari — Arunanondchai made a dramatic entrance in red-tinted glasses and tie-dye mesh, carrying Dimayuga down the stairs like a newlywed. Especially for the occasion, Liam Gillick launched a limited-edition artwork in the form of napkins and coasters sporting strange directives. “50g of obloquy, 50g of infamy, 2 pinches of humiliation,” went Gillick’s recipe for a stiff drink. After a week like this, we’ll have it on the rocks.