The wedding of artists and Maroon World co-founders Cynthia Cervantes Gumbs and Travis Gumbs was a visual feast, set in rural Michoacán, Mexico, with each in custom garments that paid homage to the community and culture surrounding their ceremony. The layers of this sumptuous and spectacular event expanded far beyond the wedding itself, though, with roots deep in the heritages of both the bride and groom, and in reaction to the political and cultural tensions of Michoacán, which currently sits on the US State Department's "Do Not Travel" list. In a short film directed by Sonia Malfa, screened at The Standard, High Line, Cynthia and Travis explore and share these themes of interconnectedness, ritual, and history, through a love story that is rich with love, family, and blessings.
THE STANDARD: Tell us about the title, “Bendiciones.” What does that mean to you all, and to the viewers?
SONIA MALFA: My goal was to shape Cyn and Trav’s extraordinary wedding into a visually poetic documentary that is a mediation on the interconnectedness and circle of life. I hope the audience by viewing would take pause and observe our daily blessings - the beauty and spiritual interconnectedness in the lives of this family and community and breathe in these loving, blessed quotidian moments.
CYNTHIA CERVANTES GUMBS: Exactly! For us, it was also about the act of expressing gratitude by acknowledging our bendiciones (blessings). The whole event was really about giving thanks; to the land, to our ancestors, to our families, to the people who came from near and far to celebrate with us. Every component that came together to facilitate this moment in time!
TRAVIS GUMBS: That day was a culmination of blessings. It’s a rarity that you get to experience so many people, communities, and cultures coming together to celebrate in a way that was so unique to who we are. That we got to do all of this and experience it all together - that’s the basis of the title. We know the dynamic sounds of Asma Maroof have appeared in a range of venues and mediums, from brand presentations like Kenzo and Celine, to the MTV VMAs, to independent shorts. Can you describe your collaboration creating an original score that fit the sensitivities and nuances of the film?
SM: The score was critical to creating the emotional journey of the film, since there was no narration. We were overjoyed to have Asma, and she collaborated with her music partner, Daniel Pineda, to create an incredible score for the film. Visually, I had built the arc of the film into “Chapters”  that I shared with Asma as as guidelines to develop the score.  The film opens with THE ENDING, then PREPARATIONS, RITUAL, CELEBRATION, THE ENDING, and ends with NEW BEGINNINGS (CREDITS). By opening with the ending I was putting into motion the circle of life premise. Asma took this structure and made it come to life beautifully by blending samples from traditional folkloric Mexican music with her own original music.
CCG: I mean Asma is an icon! I’m lucky to call her my good friend, and we were also extremely lucky to have her DJ at the wedding as well. It meant a lot to us to have her translate the emotion of the film into an original score that we felt really captures the spirit of the whole experience.
What were the crucial themes you wanted to convey through “Bendiciones”? Which were the most challenging to translate on camera?
SM: For me, the film is based on the concept of macrocosm and microcosm: the macrocosm of the cycle of life and how a wedding is a microcosm representation of this cycle. Weddings are universal rituals of joining a couple and their families. They are landmark moments in an individuals' lives where their worlds come together for a brief moment. As children of immigrants, Cyn and Trav possess the duality of being American as well as Mexican and Caribbean. Many of us live this duality where our family, home life and our public or social lives are culturally opposed. We as the children of immigrants learn to synthesize these cultural dualities into a beautiful, rich and powerful tapestry.  I wanted to showcase the profound beauty Cyn and Trav created by of honoring their families, homeland, spirituality all while remaining true to who they are as contemporary artists.
TG: Yes, exactly. It was really important for us to touch on how critical family, ritual, culture, and community were to us in this moment. Each of those components was something we thought deeply about, and sought to incorporate in a way that felt organic to us as individuals and as a couple.  I would say that each of these feels beautifully represented here; but putting each of them together definitely took a lot of time and patience.

"Many of us live this duality where our family, home life and our public or social lives are culturally opposed. We as the children of immigrants learn to synthesize these cultural dualities into a beautiful, rich and powerful tapestry." What was the overall creative direction to achieve this?
CCG: It was important for us to capture the day from the perspective of the town and the people. From the beginning to the end of the day - what was everyone experiencing from all different perspectives? That was at the heart of our creative. We also begged Sonia not to include us too much, as we wanted the real focus to be on the feeling of being there.
Michoacán, the site of the wedding, is currently on the US State Department’s Do Not Travel List. How does that impact the feel of the film, and how did it impact the wedding itself?
SM: Much of American media about Mexico portrays negative stereotypes that are harmful and racist. So it was of critical importance to me as filmmaker to showcase the events of the wedding while illuminating an authentic portrait of this region that shows the beauty and richness of Mexican life and community.
TG: There were some people who’d didn’t come to the wedding because of the way Michoacán is portrayed in the media. We definitely sought to make a film that highlights the beauty of this place and the community, because these are the types of stories that never make it to the mainstream. Ultimately it’s the people and communities that suffer because of the mischaracterization of areas that are labeled dangerous by the government. The wedding venue was on your father’s family’s ranch, correct? How did that act as the “set” for the film?
CCG: It was definitely central to the “plot” for us. From the onset, we wanted to create an opportunity for people to come and appreciate the natural surroundings and to really engage with the land and people that make the ranch so special to us. It was also important to us that we incorporate local artisans and creatives - from the wall mural that was done by a local father and son, to the plates that were handmade in a nearby town, everything we used came from the surrounding areas. In creating the wholistic picture of the ranch and décor, we must talk about both of your wedding looks in detail. Please really go in on the LUAR dress. We want to learn more about Travis’s suit, too!
CCG: The setting definitely influenced how we imagined dressing ourselves for that day. I was heavily influenced by indigenous traditions and the idea that this dress was a rite of passage of sorts - entering a new dimension of my life. I wanted to feel strong and powerful and feminine and truly Raul is the only person who I could imagine capturing all those components. We spent countless weeks going  through every fabric store in the garment district and trying different things out and when the vision finally came together we were jumping up and down squealing! I came to him with references and he just honestly took each component to the next level. For instance, I said I wanted a dramatic slit, and he was like, Sis - why not do a one leg pant with the silhouette of a dress! Most people didn’t realize that’s what was going on but there were so many details like that which are a testament to his genius.
TG: The Xmas before the wedding, there was a Mariachi that played during the posadas (Christmas parties) on the ranch. Seeing their suits against the setting of the ranch was so beautiful, and it really inspired me. I worked with the team at Casa del Mariachi in Los Angeles, and the moment I walked in I saw the fabric I wanted to use. I also spotted the tribal pattern that runs throughout the suit pretty quickly and knew that it was perfect for the vibe I was going for. It took a lot longer to figure out the back and arm designs and for that I turned to our friend Romina Cenisio, who created an astrological design that combined our signs (Gemini + Sagittarius) on the back. It was a beautiful representation of us. Watching the footage of yourselves in these truly resplendent garments, does it feel like a dream, or like you’re watching characters in a movie?
CCG: It does feel a bit surreal because on that day you are so deeply in your emotions and in your thoughts, so seeing it from another perspective is definitely interesting.
TG: The day itself felt dream like - so much is happening and it’s hard to take it all in.
So much of this film focuses on love and family. How did your families, both blood and chosen, react to it?
CCG: We honestly could not have asked for a better way to show the film than the screening at The Standard! In many ways it was like a reunion but also a way to share the love and energy with so many others who were not able to be there. Everyone started screaming at the end to show it again lol! We haven’t been able to show it to everyone yet though, but my Dad saw an early cut and was really happy with the way it portrayed La Estancia (the town) and the general feeling of the wedding.
Has your baby watched it with you?
TG: Yes! He saw a few cuts of it before it was finalized! We last checked in with you before your wedding, in a super steamy shoot and talk at The Standard, High Line. How have you both and Maroon World grown and changed since then?
TG: So much has changed! We got married, had our son Tenoch León, and have put down roots in CDMX. Our center of inspiration will always be the communities we come from, but we definitely feel a shift in what topics we see ourselves focusing on in the future.
What’s next?
CCG: We are working on the third volume of Maroon World, which will launch in the fall. We also have a few other projects that we are working on with friends that we are excited about. Most importantly we are learning how to balance parenthood with running a business and living abroad! BENDICIONES from MAROON WORLD on Vimeo. 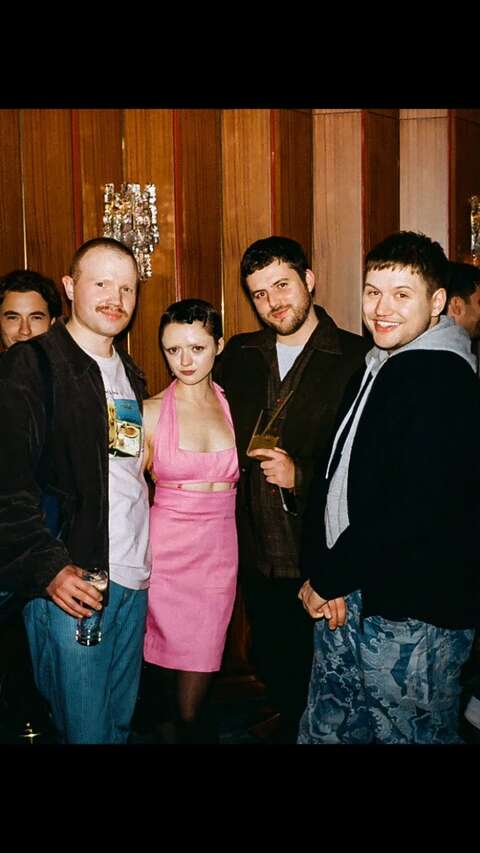