As huge proponents of gun control over the past year and a half, we've partnered with Everytown for many an event and have been greatly inspired by the leaders of the movement that have come through in support, like Dwyane Wade, Julianne Moore, and Manuel Oliver. Let's keep the momentum going and support Wear Orange and Everytown this weekend.

June 1, 2018, marks Wear Orange Day, or the 4th National Gun Violence Awareness Day. It all started with a young girl named Hadiya Pendleton, a Chicago high school student. She marched in President Obama's second inaugural parade on January 21, 2013, and one week later she fell victim to gun violence on a playground. Her friends have kept her memory alive by wearing orange, the color hunters wear to protect themselves, during her birth month, and it has sparked a national movement. Last year, over 215,000 people wore orange, and it's expected to be even bigger this year.

From June 1-3, 2018, every Standard hotel will offer a food/drink special or event in support of Wear Orange and Everytown. See below for the full list. If you can't make it to one of our hotels, you can still wear orange, encourage your friends and family to #WearOrange on social media, and donate to Everytown.

Cool off with an orange popsicle at the new Standard SeaShack!

Drink a special Red Valencia cocktail for a good cause.

We're teaming up with SameSide for the WEAR ORANGE Shine + Swim Party on the Rooftop to support Everytown, with Travis Holcombe and Ari Shark providing the tunes. Tickets are $10, and you can buy them here. 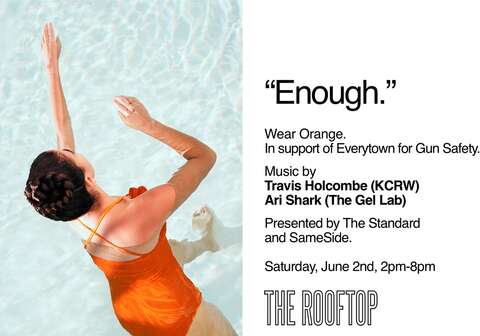 Get your paws on the Inner Glow cocktail, with turmeric-infused vodka, carrot juice, lemon, and ginger beer. The Standard Telephone Co. Wants YOU to Ring Your Rep