The daughter of Mexican immigrants who met while working in the fields of Northern California, Guadalupe Rosales grew up in LA’s Boyle Heights in the '80s and '90s. Back then, the neighborhood was primarily Mexican, and Rosales found her community by joining a “party crew”—groups of kids who organized parties and raves. In 2000, Rosales moved to New York where she stayed for 15 years, during a time when LA’s East Side experienced rapid gentrification. “If my city is changing, then my history is being erased,” she says, “and when that happens, people start to forget it.”  Now back in LA, she runs @veteranas_and_rucas, her curated, community-sourced Instagram handle filled with archival photos of LA’s Chicano population that seeks to dismantle stereotypes and reclaim history with every post. She’s noticing people are feeling more positive about their history, saying “People like to talk of it instead of being ashamed of it.” She has 128k followers to date, and she can now say she’s LACMA’s first Instagram Artist In Residence. She shared some selects from her archives with us.
Photo #1: The Girls of East LA 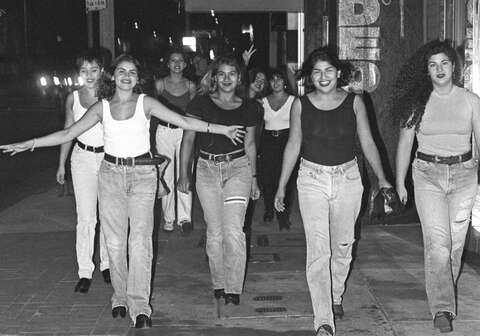 “This is a photo from 1992 of a party crew called The Girls from East LA, and they’re crossing Melrose. Party crews organized house parties and raves, and they’re completely different than gangs. I highlight women because I’m trying to show that women were a part of this history, too, not just men.” “This is a photo of Hollywood Boulevard on a cruise night. On weekends, people would go cruising to meet people. This was all pre-cellphones, and people would carry their cameras to document it. You can see a guy taking pictures on the left-hand side. This is when the cops started telling people not to cruise. If you passed by the same area more than three times, it was considered cruising, and people would get tickets. This picture was taken right before the 605 freeway. When the cops didn’t want people to pass by again, they would reroute them to the freeway.”
Photo #3: Sixth Street Bridge, 1993 “This is of a party crew called Mind Crime Hookers taken on the Sixth Street Bridge in 1993. The bridge is an iconic landmark for a lot of us, and it was demolished in 2015. We used to hang out under the bridge by the LA River, and over the bridge, we used to cruise from Downtown to East LA.” “This photo was submitted to my Instagram by the woman on the right, and, she wanted me to share that her friend on the left is doing life in prison. Here, they’re enjoying a car show. You never know what’s going to happen in the future. The girl has a beeper in her pocket. It’s like a time capsule.” “This photo was taken in Ensenada in Baja California. After people turned 18 and became more independent, they started partying on the other side of the border. Not a lot of photos from this scene exist and not a lot of people know about it.”
Photo #6: Teenage Rituals “This photo was also taken in Ensenada, and it made me think about importance of candid photos. We don’t really see that anymore. This photo was taken by young men who were flirting with these girls. They snapped the photo and the girls were totally fine with it.”