We sat down with the piano prodigy and protégé of Quincy Jones before he returns to play our Sunset Jazz series at The Top Of The Standard on Saturday, August 22nd.
THE STANDARD: You’ve been raised in music, and started music lessons when you were 4 years old. What's your earliest memory of you feeling connected with music as a child?
JUSTIN KAUFLIN: I’ve always been fascinated with the piano as long as I can remember. Initially, it was the instant gratification I received from simply pressing a key and getting a sound out of it. I quickly started gravitated towards figuring out melodies I had heard by reaching up and finding the right notes. Thankfully, my parents and my violin teacher at the time saw my ability to learn by ear and helped me further develop this particular skill. 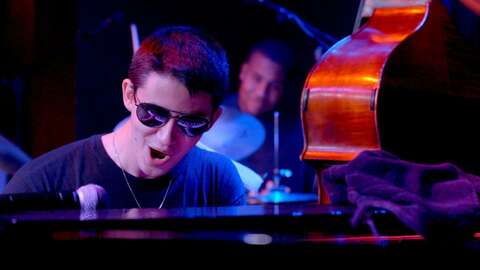 PHOTO BY RORY ANDERSON / QUINCY JONES PRODUCTIONS.
It was later in your childhood that you concentrated on music. You said “you started falling in love with music the more you practiced.”
Losing my sight completely at age 11 was the first point where I realized how important music is in my life. In the beginning, I was equally drawn to the progress I was making as a musician as well as the classical pieces I was learning at the time. I found there is a real beauty in music itself and in realizing one’s own growth and ability to express oneself through that music.

Right now, what keeps your love for music growing?
I’m constantly amazed by the relationship between myself and the audience. I love that a good relationship and connection between us is essential to an amazing experience for everyone. It’s a symbiotic relationship. I share my music and pray for a connection. When there is a connection, I get a real visceral response from the audience, which then drives me to strive for higher levels. It can be quite a spiritual experience.

“I share my music and pray for a connection.”

You have been mentored by two of the greatest jazzmen, the late Clark Terry and Quincy Jones. Quincy said you’re a "beautiful cat, you can feel it in every note [you] play.” Do you think jazz is the window to the soul of the musician?
Art in general is a glimpse into a person’s soul. Music presents a unique medium that somehow reaches even deeper into both the musician and the listener. I firmly believe that the most honest type of musical expression draws purely on what’s inside that person. When things don’t click, it doesn’t necessarily mean a person is ugly or bad: it means there is some incompatibility between the musicians. When the music is really happening, I believe that’s a direct result of the musicians sharing a real common inspiration and goal in their music-making. In a perfect world, we would all get along just fine, but, we’re in the real world, where that doesn’t happen all the time. I feel this dynamic every time I get together with someone new.
You said Clark taught you “it was not just about being a good musician, it’s about being a good person.”
Clark taught me many, many things. One thing that stand out in particular is the importance of being a truly great performer. After spending time with CT, I realized the difference between being a musician and a performer. Clark was not just a master trumpeter. When he was on stage, he brought the audience into his world. He was engaging. He communicated so much through his words and personality. He created a whole atmosphere that made everyone feel welcome and so happy to be there with him. That’s something very special.

"[In New York], things are tough, but inspiration is never lacking."

You lived in NYC for a while after graduating with a degree in jazz performance and you said it was a tough time, especially as a blind musician. Could you share one of your favorite jazz memories from those hard times in NYC?
No matter how hard it gets in NYC, you can always depend on seeing some of the best musicians in the world. Things are tough, but inspiration is never lacking. One thing that came out of my first stint in NYC was my first album, Introducing Justin Kauflin. This was a particularly special experience for me, and I’m glad I got to share how I felt at that time through the music. I’ll always be grateful for the difficulties I faced in New York, as those are the things that have helped me develop not only as a musician, but as a human being.

You spent your childhood in Virginia Beach. What's the most jazzy thing you can do there?
Ouch, that’s a tough one. Jazz is probably the last thing that comes to my mind when I think of home in Virginia. Virginia presents a very good contrast to life in New york.  The area is quite peaceful and laid back.  Even though it’s not a center for jazz, I’ve always been extremely grateful for the jazz musicians I got to know over the years.  My drummer, Billy Williams, also comes from Virginia Beach, and he is a huge source of inspiration for me. I also got to study and hang with some great musicians, like John Toomey, Jimmy Masters, Jae Sinnett, Jeff Smith, Chris Bridge, Liz Barnes, and many others. There’s not a giant jazz scene, but it’s certainly blessed with some fantastic players. The jazziest thing I can do these days is go see one of my old teachers, Woody Beckner, play duo with other musicians in the area. And, I have to say, that’s not too bad.

On Monday, August 22nd, Justin Kauflin performs at The Top Of the Standard
Sunset Jazz, 4-9pm
The Standard, High Line

Talkin' All That Jazz with James Weidman