There are few better ways to get to know a human really quickly than over a few drinks, and we really wanted to get to know downtown girl Sandy Liang, and fast. She’s so driven at such a young age, it’s hard to keep up.

Sandy Liang, a New York native, is best known for her highly chic outerwear. She’s also known for launching her brand a few years ago, right after graduating Parsons. (Same.) Since coming out of design school swinging, her duds have been seen on starlets such as Kate Bosworth; she just presented her Spring 2017 collection at The Standard, High Line as part of Made x The Standard Fashion Week; and Mercedes Benz dressed Hiplet ballerinas in her designs for this year’s Fashion Week short, Midnight at the Museum. Did we mention she also just started a graduate program in architecture? (Again, same.)

Before her Fashion Week presentation, rather than asking Liang all the typical questions, we wanted to go the more personal route, and what better way than by inviting her over to our house and having a few stiff drinks. Over tequila cocktails at The Top of The Standard, Liang got candid about family, career, drunchies, and dating. THE STANDARD: Your parents’ restaurant, Congee Village, is an NYC institution. Did you work there growing up?
SANDY LIANG: I worked there as a hostess for two weeks one summer when I was in high school and it was really hard. People were super demanding and tried to say they were friends with someone to get a table. I would just be like, “I don’t know who you are.”

What’s one story you can share of the restaurant from your childhood?
I got my first Britney Spears CD at K-Mart and I was so excited to play it. Right after K-Mart, my dad had to go to work, so I played it over the loudspeakers at the restaurant. Everybody got to enjoy Britney that day.

Wink once if you have a favorite Chinese restaurant in the city that’s not your parent’s restaurant.
I can’t wink, so it’s perfect. I am very bad at winking.

As an undergrad, you left RISD for Parsons to make the switch from architecture to design. What made you realize that architecture wasn’t for you?
There was a part of me that wanted to please my dad, but I felt like when else am I going to get the chance to pursue what I really want to do? I felt like I should just go for it. So I did…

You just started a master's program in architecture this week. What brought you back to architecture?
It’s something my dad has always wanted for me. It’s a dream of his for me to be in architecture. He works in real estate, so I wanted to have an education and background in it so I can make educated decisions and help with the family business at some point. My dad just assumed because my brother is the male in the family that he would take over everything. That really upset me for a long time, because I felt like just because I’m in fashion design doesn’t mean I don’t take what he built seriously. I am just trying it out; I don’t know if I will be able to make it.

What do your parents think of your current collection?
My parents are not super involved in what I do. My mom has been to my studio maybe three times. My dad has been to every one of my presentations; we are very close. They think it’s cool. I try to talk to them about my inspirations and stuff. It’s really cute, I'll tell my dad that I am making a coat and he'll say, “Honey, you should be making polos instead, because people aren’t going to want to buy a million coats a year, but they will buy lots and lots of polos.” Great business advice, Dad. 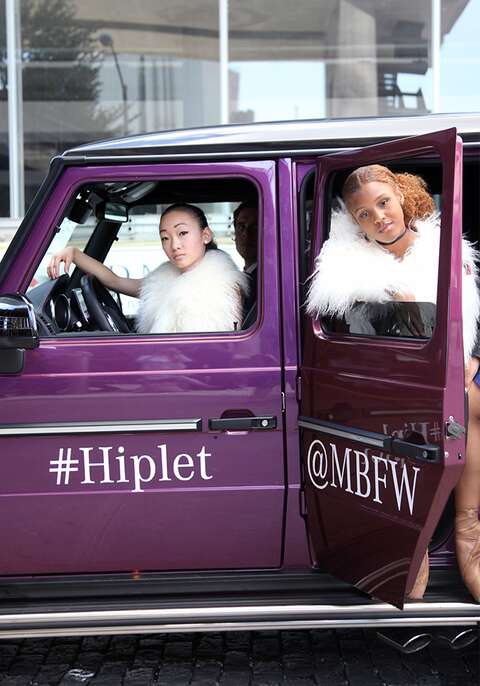 How does the Lower East Side influence your fashion design?
In every single way. When I first moved there about three years ago, there was this juxtaposition of old and new. My dad opened his restaurant there before it was gentrified at all. There is such a sense of community in that area. I also feel like people just care less there. It’s not Chelsea, you know?

Since you’re such a downtown girl, what do you think of uptown girls?
I don’t think I know any uptown girls, honestly. When I go above 14th street, I feel so far away from home. I never just wander up there for no reason. I'm sure uptown girls are great…

Do you have any pre-show rituals?
I always get donuts for everyone. Like, a lot of donuts. 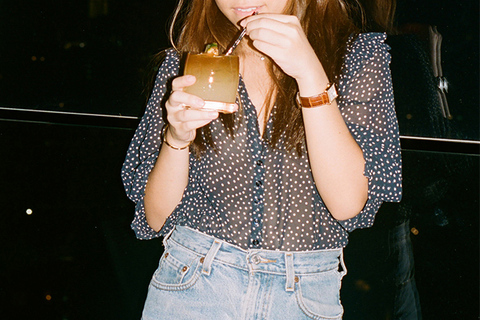 Is there a liquor you can’t drink?
I don’t love beer, and I also don’t really do rum because I drank a lot of it in college.

What’s your drunk tell?
I used to be a really bad drunk texter, but I have dialed that down a lot. I know I'm drunk when I get giggly…and when I can wear heels without even thinking about it because I don’t feel anything anymore.

Drunchies?
There is always drunk eating. Do you want to look at my Seamless account?

What’s your favorite bar in New York City?
I like Forget Me Not and Attaboy, it just depends on if I want to see people. And I love their fries. What has your dating experience been like in the city?
I feel like it’s a generational thing. Everyone is on these apps with super high expectations and I know this because all my friends are going through the same thing. I am not a serial dater, but for some reason I always have a boyfriend. I'm not very good at being single.

Would you ever date another fashion designer?
No. I like people who have like no interest in things related to my work.

The best thing about social media is…
Seeing my dad take selfies. This is not a man who takes selfies.

The worst thing about social media is…
Hearing people talk about the same thing over and over again.

When’s the last time you cried?
Over the winter, I got this weird rash on my left cheek. I was walking home and totally just broke down—this thing was like eating my face. It was terrible. 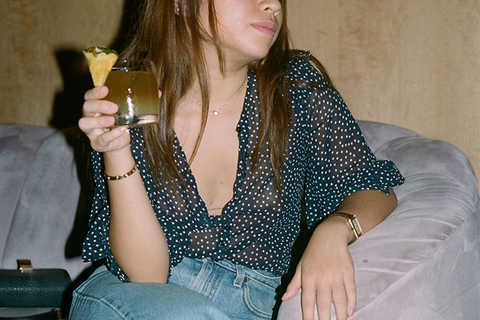 How many coats do you own?
At least 15 or 20. I steal a sample of every coat I have made. It’s going to be a great winter, I'm not going to lie.

What’s your favorite coat at the moment?
My black puffer that’s shearling-lined and it’s named after my friend’s baby, Lauren.

What’s your Fashion Week survival strategy?
Just coffee and sleep. For me, it’s work, but it’s not that serious, we are making clothes and things happen. It always works out in the end. After two years of doing this, I realize that nothing is that serious. It's more important to maintain good relationships with the people you work with rather than act out. Also, I don’t go out to a million parties during Fashion Week. People who actually work in fashion really can’t do that because you're busy and have too much work.

A designer should never…
Take credit for everything, because it’s such a lie. You work with so many people and there are so many hours that went into it. Credit should be given where credit is due.

What’s next for your brand?
I want the brand to grow. It’s interesting because my taste from two years ago isn’t necessarily the same today and it will probably be different again in a few years. I have to think about what my friends are wearing and what I'm wearing. It is not about the trends.

What do you want to accomplish in fashion?
I started an Instagram series with women I find really inspiring, like Sabrina from Dimes. The fact that she was able to start her own thing with her partner and have it be so specific and special. I read this interview where she didn’t even know how to do Quickbooks, she had to figure out Instagram, and it made me feel like I'm wasn't the only one. We're just women trying to make it all happen. It’s not just because I'm a woman or whatever. We're business people trying to make it work.

Last question: Screw, kill, marry: Daria Werbowy, Sofia Copolla, and Margot Tenenbaum.
Oh my god! That’s so hard. I would kill Margot because she would make my life miserable. I would definitely marry Sofia because she's stable and down to be with me for life. And I would definitely fuck Daria because have you seen her legs? Actually, that was so easy. 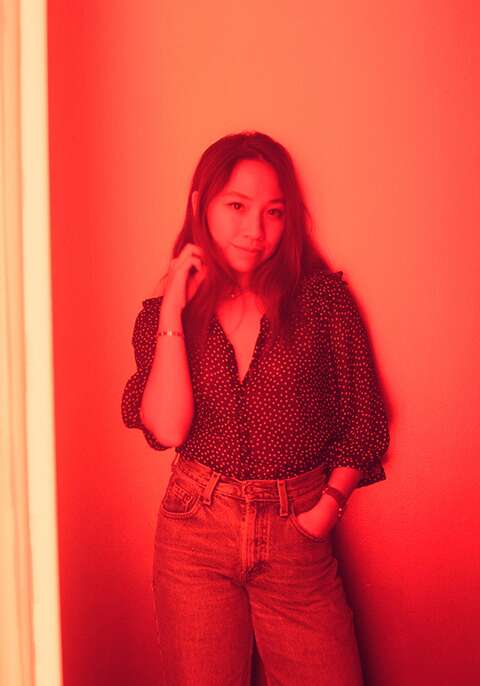 Three Sheets to the Wind with Fashion Designer Thaddeus O'Neil Made x The Standard Fashion Week in Emojis