In collaboration with Äcondieresis, The Standard, Ibiza features an exuberant mural deeply connected to the musical gestures of Isla Blanca. Artist Nicolás Villamizar brought to life the joie de vivre found throughout the hotel—expressing all the frisky fun and sensual stimulation of a stay at The Standard.

"In each of the murals that I paint, I like to bring to the wall what inspires me from the outside context; I think of a scenario where the line is a musical thread that guides us through the environment," said Villamizar. "In the paintings of The Standard Ibiza we find a celebration of life, there is music and dance, a meeting between bodies and a constant movement that you do not know where it begins and where it ends, just like life on the island of Ibiza.

The mural is full of life and subtext: Let your eyes wander on the hidden references throughout Äcondieresis' work:

"If we go through the painting we can get lost and find small hidden messages, a nod to Michelangelo, a kissing couple, bodies that mix and a choreography that unites each of the characters in a great celestial waltz. Nothing is calculated and yet everything is improvised, but the most beautiful thing is that every detail fits perfectly like in a great puzzle."

Born in Bogotá, Nicolás Villamizar has been painting all his life. Strongly influenced by an early  French education ( Lycée Français Louis Pasteur) he decided to move to France at the age of seventeen. His work is characterized by the use of color, disturbing planes and elusive frames, which project a constant mix of street and intimacy. In Villamizar's works we can find organic and avant-garde compositions of living bodies that intertwine, complement each other and often merge into abstract forms that let the imagination run wild. As for the technique, it is clearly influenced by the beginnings of the graffiti era and the characteristic work of 20th century artists.

Settled 15 years ago in Madrid, Nicolas Villamizar has spent years working on the purification and importance of the line as the main element of painting. His work is inspired by the compositions of Renaissance paintings, a clear cult of the naked body, an image of beauty and truth where there is a mix between  the abstract and the figurative.

At a national level, Villamizar has exhibited his works at the Kreisler Gallery, Casa de América, Mapfre Foundation and at fairs such as Art Mad, Just Mad, Urvanity and Mula Fest, and has served as creative director - combining painting with illustration - for several  international brands.  Currently, he has presented his new exhibition "Architecture of a chaotic beauty" a journey through his work and his particular creative universe through 50 pieces. The exhibition not only tries to approach the figure of the artist through his painting, but also through a selection of sculptures, neon signs, drawings and collectibles customized by Villamizar. 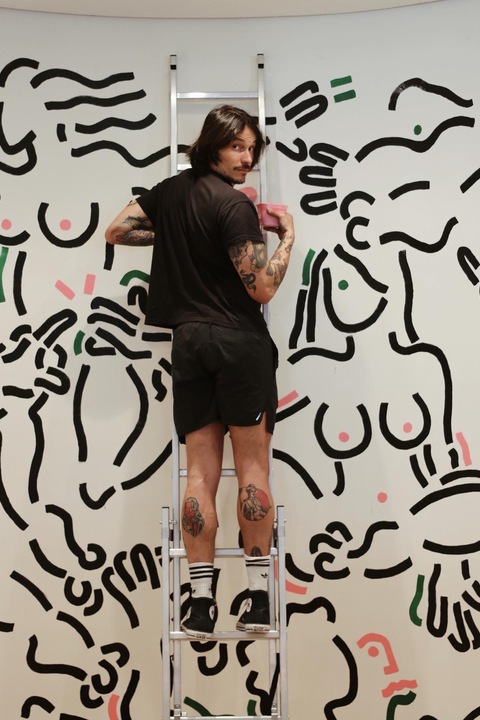