It seems New York artist Erik Parker's schedule, much like his anti-authoritarian, transgressive canvases, is jammed-packed. Last week, he was at The Shop at The Standard, High Line painting up a fire-armed, turtle-toed storm as he unveiled his first Standard collaboration, a shark-finned belt and tote bag. Then he was off to LA to install the latest Box at The Standard, Hollywood and open his new show, New Magnetic Destiny, at the Honor Fraser gallery in LA.

Parker's pink and yellow shark fin pattern swims the circumference of this custom made cotton web belt seen above. In fact, we liked the design so much we had Parker get together with Makr to line two new custom totes (one for the day, one for the weekend). The belt and bags can be purchased in any of our Standard Shops or online at ShopTheStandard.

The New Uptown, in The Box at The Standard, Hollywood features a three-dimensional replica of a painting from New Magnetic Destiny at Honor Fraser Gallery and creates a psychedelic vegetal environment in the hotel's lobby, on display through December.

More about Erik:
Erik Parker was born in Stuttgart, Germany and studied at the University of Texas at Austin and SUNY Purchase. He now lives and works in New York City. Parker has always been an avid collector of objects and images atypical of traditional art, everything from comic books to pornography, focusing on imagery produced during eras of revolt and uses them in his work. His work maintains a premeditated sense of order, while suggesting an underlying madness created predominately by use of intense color and optical fragmentation. 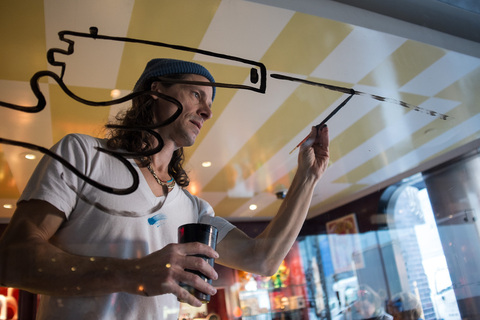