Watch out! Groove is in The Lounge!

Every Saturday night The Standard, London’s Library Lounge is taken over by some of the jazz world’s finest artists - violinists, saxophonists, free- flowing vocalists and more - who come together for a night of unplanned and unexpected performance. As part of the ongoing series, curator Jack Robson of Groove Science has been handpicking musicians to bring an eclectic night of jazz and genre-defying music. 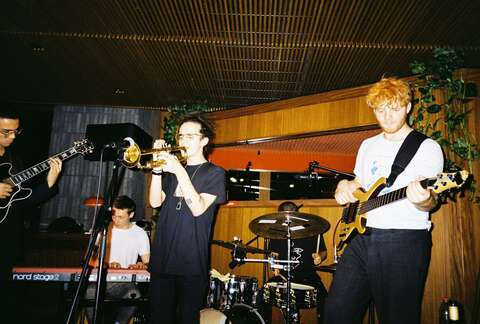 For those who don’t know, tell us about Groove Science.
Groove Science is a monthly improvised music night based out of the Library Lounge. For each edition I curate a band and we freely create improvised music with no preconceptions. The name is based around a conceptualisation of the word Groove. The connection that the musicians have or the consistency with which they play as a unit results in a feeling that is emanated to those in the crowd. This feeling of Groove is in my opinion a crucial factor in why we enjoy music. Sharing this enjoyment in music is what this night is principally about.

How did you meet your band members?
I’ve met most of the musicians who play here through the jazz scene. I am a session drummer and as a result I’ve had the opportunity to play with different bands in many different situations. London has a vast talent pool and every week you are meeting incredible players. This night enables me to put together a different ensemble each edition and see how it gels. I’m incredibly lucky!

Who are some of your biggest influences in music?
My mother and father are violinists and have played in orchestras and my brother is a multi-instrumentalist so I would say my family are my biggest influence. I was exposed to such a wide array of sounds throughout my childhood and from that I developed the necessary sensibilities in the foundational aspects of music such as harmony, rhythm, dynamic and so on.

Many people have preconceived notions of what jazz is – what does it mean to you?
I like to think of jazz in a conceptual way. It is a style of music of which improvisation is typically an important part but to me it is about honesty and authenticity, an acknowledgement and understanding of the past and a will to break new ground and try something different. The jazz scene in London is really exploding – how do you think that’s happened?
I think a lot of these artists are united in that they have had very fertile grounds for musical exploration at a young age. Tomorrow’s Warriors is a jazz music education program of which many of the most notable figures on the scene have passed through. Children who have access to spaces where their creativity is nurtured and they are free to experiment will be able to develop distinctive voices as adults.

What musicians do you think are doing an amazing job at the moment?
Axel Kaner Lidstrom is a trumpeter and musical director currently leading a project called Levitation Orchestra. None of the members are individually responsible for the orchestra’s compositions and the whole 13-member ensemble composes music collectively. They have just released an LP on Astigmatic records and I urge everyone to go and see them live!

Favourite record of the moment?
I’m currently listening to trumpeter Ambrose Akinmusire’s album Origami Harvest. It is a beautiful example of a synthesis of jazz and classical music, and features an incredible drummer called Marcus Gilmore who Is a great inspiration to me.