Last weekend, Opening Ceremony and Adidas celebrated their tennis-inspired collaboration at SPiN Standard, our favorite little ping-pong club at The Standard, Downtown LA.. O.C. founders Humberto Leon and Carol Lim hosted the gathering with more than a few camera-friendly faces including singer Rita Ora and director/collaborator Spike Jonze. The ping-pong club turned out to be the perfect fit for the their racquet-inspired, retro-90s-bent collection.

“Carol and I both played tennis in high school, and now we’re obsessed with Ping-Pong," Umbereto told Style.com. As he waited for his match with Spike, Umberto expanded on his sporting proclivities to Elle.com "I really, really sucked at soccer and football growing up. Tennis, handball, kickball, and tetherball were my games. I'm pretty amazing at tetherball, to tell you the truth."

Looks like he might have to challenge Spike to a re-match in tetherball then as the indie director cleaned up the tournament.

By the way, how fun is this Gif photo booth? That mysterious halo everyone is staring into actually is snapping gifs. Check out the rest of them here 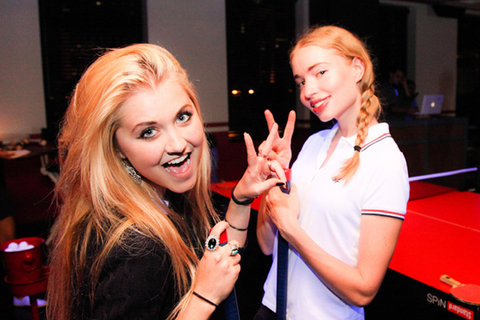