The Italian DJ duo tells us about Milan's nightlife before they rock Le Bain on Friday, May 4th.
LE BAIN: Tell us about the night you started being serious about DJing together.
ROLLOVER DJS: There used to be this tiny bar on the canal in Milan where we went to play music all the time over for two years. All our friends would come to hang out. One day, it closed down and we felt completely lost without it. That’s when we started searching for another place to take our music and people. Soon enough, we found this old Italian bistro, which happened to have a small dance floor inside as well, and we knew we finally had to make people dance! That was the time when we started being serious about DJing together.

Who is your favorite DJ duo ever?
2 Many DJs have always been inspiring for us. They are the first DJs who made us appreciate clubbing. They made us realize that it was totally possible to mix The Strokes with Tiga.

I don't remember Milan being famous for its nightlife. Am I wrong?
That's not entirely correct. Milan started to take its place as the best city in Italy in the mid-'80s and was famous for its hardcore party scene. The city has simply changed, both in terms of its way of life and how it interprets the idea of nightlife. Now it's more focused on the quality of the parties and on the message of each party crew. And this is where our party Rollover enters. Up until then, the party scene was centered around the branding of Milan's big clubs—Plastic, Magazzini, Tunnel. Rollover has been able to create and contribute to the shift in the scene of Milan. The Rollover crew was the first group that was able to bring together the DJs, promoters, performers, VJs, and everything else that makes a party unique and to focus on the party experience, not the name of the venue.

But you have your own venue, right?
After four years of doing the Rollover parties around the city, we opened Apollo Milano in Autumn 2016. It soon has become a reference point for an entire creative scene, from music to design to fashion in a sort of creative factory with a game room, bar, restaurant, and dance floor. All of this is totally new for Milan because finally the night scene has come to be associated with a meeting place to exchange ideas, relax, dine and have fun...and obviously for clubbing as well!

Is there an iconic DJ or nightlife figure that has been inspiring Milan’s nightlife, like the David Mancuso or Larry Levan of Milan?
Without a doubt, Nicola Guiducci. Together with Lucio Nisi, Nicola founded Plastic in 1980. In its 30 years of existence, Plastic saw pretty much all the big names of the music world pass through. We're talking Madonna, Elton John, Andy Warhol, Freddie Mercury, Prince, Paul Young, Bruce Springsteen, Keith Haring (who was a very good friend of Nicola), and of course Elio Fiorucci. New York had Studio 54, Milan had Plastic. Sunday was always the special night at Plastic. It was obviously very hard to get in unless you were "someone" and only Nicola Guiducci put the music on. And these Sunday nights were special because of his unique, eclectic touch only he could bring to these parties. You could dance to anything from old French vinyls to the latest techno sounds. It was pure. 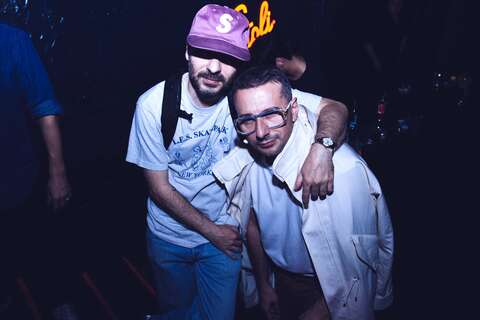 You’ve been linked to Milan's fashion scene. What would you say is the most exciting fashion thing happening in Milan right now?
When talking about breakthroughs in Milan's fashion scene and beyond, Marcelo Burlon is the guy. He started doing parties and PR for fashion brands and then he created his own fashion label that is now famous all over the world. He’s makes everything look so easy, when actually it's not easy at all...

Elio Fiorucci’s shops were known as “daytime Studio 54.” What kind of place would the “daytime Rollover” look like?
Daytime Rollover? It would definitely be some seaside space, or at least a chilled space with the Italian seaside vibes. More accurately, "Puglia vibes," because in case you didn't know, all of us of the Rollover crew are from Puglia in the south of Italy, so no matter how long we've been living in Milan, the sea is always calling us. Then there would be continuous Balearic music, the music we feel a deep attachment to, because for us it is the music that enters before and after the nightlife, but its soul is also inside the nightlife. That's why Balearic music is at the core of the label we founded last year called Anything Goes.