We sat down with NYC dance music devotee Paul Raffaele before he plays all night at Le Bain on Saturday, February 24th.
LE BAIN: Everyone calls you one of the most hard working artists on the NY dance music scene. You do a lot of things—the zine, the label, the gigs, your day job as an artistic director—but isn’t everyone supposed to work hard in our great city?
PAUL RAFFAELE: I’m lucky to have never struggled in my life. Working hard to me is a single mom working two jobs at minimum wage and trying to feed her family in NYC. I understand I’m privileged to be able to fill my time with things I choose, so I try to be as productive as possible. 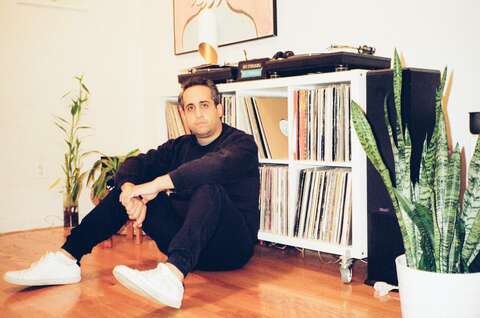 Let’s talk about DJing. You’ve learned the basics of the art while being a resident DJ at Pacha from 2007 to 2014. Pretty big way to start.
Pacha was the last of the Manhattan mega clubs, and like a lot of clubs from that time, it had a sound system that could lift you off your feet. Because I worked there, I got to play often–first when other DJs didn’t show up, then after a while they’d ask me in advance. Learning how to harness all of that power, figuring out where and when to use the physicality of the sound was a big lesson for me early on.
Were you opening for the star DJs?
I would open and close for wildly different types of DJs, from Benny Benassi to Erick Morillo to Frankie Knuckles. For opening sets I’d put a lot of time into preparing, mostly trying to figure out how I could be myself while setting up the headliner properly. I’d spend my entire fee, sometimes more, buying three times the amount of music than I could ever play for that gig to make sure I had alternate routes to go incase something didn’t work.
What are the most important things that you learned?
I learned to identify shifts of momentum—where you might peel a few people away from the bar with a record, then figuring out how to capitalize and grow that small cluster of people into forming some as semblance of a crowd, then sustaining that. Closing forced me to think about what type of peak-time DJ I was. How can I be me and keep these 3,000 people in front of me for as long as possible? I didn’t always get it right, but it helped that I was thinking about this stuff early on.

About your and Barbie Bertisch’s zine Love Injection, you once said, “The reason people like us is because we’ve figured out how to cut through the digital noise, and that’s by ignoring digital.” It feels good, just reading that.
I spend an ungodly amount of hours staring at a screen, and I’m really happy when something encourages me to turn off. We’re just trying to give people more offline experiences. There's a lot of smart people out there working for big companies dedicating a lot of resources fighting for your eyeballs on their online articles, and that's not a fight we want anything to do with.
The new issue (the 34th!) is actually just out. What’s your favorite thing about it?
We had the opportunity to interview the legendary Nona Hendryx! LaBelle, Talking Heads, Material, a crazy solo career, and the list goes on. Barbie did a great job with it. Big love to Eli Soul Clap for setting it up.
A lot of new things are happening in the NYC scene. There are exciting new venues opening, a great web radio, lots of new producers and DJs, the NYC’s cabaret law just got repealed... it seems like there is a real renaissance ahead for dance music.
Recently it feels like there’s a new focus on community in everyone’s work and it’s succeeding in bringing people closer together. That wasn’t always the case. There’s dozens of secondhand record shops to hang out in now in Brooklyn, there’s The Lot Radio, their work at the San Damiano Mission, Luaka Bop, Magick City, Mixtape Club, 718 Sessions, Body & Soul, The Loft, Joy, Unter, Dance Liberation Network, Deep Space, Ambient Church, Discwoman, Nowadays, Good Room, Black Flamingo, and more I’m forgetting.
You once said, “I don’t see myself doing that any time soon, but I am feeling the urge to slow life down a bit.” When it happens, what will you do?
I’ll be making things and playing music in some form till the end.

All photos by Neil Aline