We asked the NY iconic DJ Justin Strauss to tell us the stories behind five of his Instagram pics before he plays all night at Le Bain on Saturday, April 7th.

JUSTIN STRAUSS:
"Sound Factory took cues from the Paradise Garage—the members-only club where they issued VIP membership cards to friends and friends in the music industry. Sound Factory wasn’t a membership club per se, but it did issue these cards as well for friends and industry folk. The creative forces at the club, Christina Visca and DJ Junior Vasquez, were at the center of New York club culture in the early '90s in the wake of the Garage closing in 1987. It had its own sound and spirit, which paved the way for Twilo and amazing nights at the smaller Sound Factory." "This is what a typical week looked like for me in 1985. I kept a datebook to keep up with my gigs and calls I had to make pre-internet when people actually called and saw each other. Some interesting calls I made that week were to the genius designer and friend Stephen Sprouse. I had done the music for Stephen’s legendary fashion show that was held at Ritz in 1984. It was exciting to work with him on it. Stephen was all about rock'n'roll and punk, and we used Iggy Pop and Siouxsie and the Banshees among others. Another call to producer Arthur Baker. As far as my gigs went at this point, I had residencies at three of the best clubs in New York. I had started at The Ritz since 1980 and still kept two nights a week when I started to work at Limelight, and then Saturday nights at Area. DJs weren’t traveling around the world then, you just played in clubs where you lived. You played at the club every week and for the whole night from beginning to end. It’s a rare thing these days for DJs to do that and I'm happy Le Bain is giving DJs the opportunity to stretch out creatively and play from the first record to the last." A Handful of Pins

"I have always loved to collect things. One day I was looking for something and came across a bag of pins I stashed away and had forgotten about. Clockwise: The Ramones was a promo pin for their first Sire Records album. The Blondie pin was issued in connection to the first single on Private Stock Records, “X-Offender.” I had been the DJ at the Ritz on 11th Street in the East Village (years later it became Webster Hall) since it opened in May of 1980 and worked there for five years. The amount of amazing bands and artists that played there was astounding, from Prince, to Kraftwerk, to Tina Turner to Depeche Mode to just about anyone else you can think of or want to see. The Beastie Boys pin from their first Def Jam LP. Loved them and knew them from their pre Def Jam days. A Sparks promo pin for their second Island Records LP, Propaganda. Sparks were a huge influence on my band, Milk n’ Cookies, and we were eventually signed by their managers and signed to Island Records. Wayne County (now Janye County) was a seminal performer on the New York scene in the early '70s, playing around town at the time of the New York Dolls. Outrageous would be an understatement to describe a Wayne/Jayne County performance." "A few years ago I started seeing these amazing art pieces in the subway, which were in fact amazing collages from layers of advertising posters you normally see down in the subway stations. Not sure if it was one person or a few different people doing them, but they were all over the place for awhile. They immediately reminded me of when Keith Haring would do his chalk drawings on the black spaces before the ads went up. It was magic that you could walk down into a subway station and see an amazing work of art created out of a blank space or existing advertising. I found them inspiring and they made me feel hopeful about people still finding a way to be creative forces in the city." 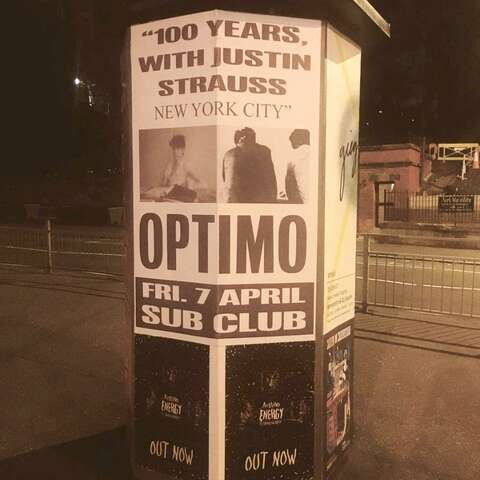 "Glasgow’s Jonnie Wilkes and JD Twitch, better known as Optimo, are two of my favorite DJs and music producers and I'm lucky to call them friends. I met them on one of their trips to New York years ago, and we had been trying find a time to play together at the famed Sub Club in Glasgow where they had a long-running night there. The stars finally aligned and we finally made it happen around a year ago. It was a thrill to see these huge posters plastered all over Glasgow when I arrived. The boys figured that our combined years spent DJ-ing came in around 100 years, so hence the name for the night. The next night we also played together back-to-back all night at the Robert Johnson club in Frankfurt, Germany. Another dream come true. For the last song of the night, JD ended the set with one of two remixes I did for the band Skinny Puppy in 1987. He told me he played it in his first ever DJ set and it was a magic moment for me."