From being a regular at the Paradise Garage, The Saint, and Studio 54 to creating the legendary club Sound Factory with Junior Vasquez, the mastermind behind our Sunday night party Birdcage shares some nightlife memories. Enjoy the flashback and see you Sunday, January 20th!

CHRISTINA VISCA:
"I was a Peter Gatien discovery and started giving parties in the library of the Limelight in 1983. Things snowballed from there and I continued doing parties around town and ended up working the doors at many, like The Palladium under Steve Rubel and Ian Schraeger [of Studio 54], 1018, The Tunnel.... So when I said 'come to my party,' people came. 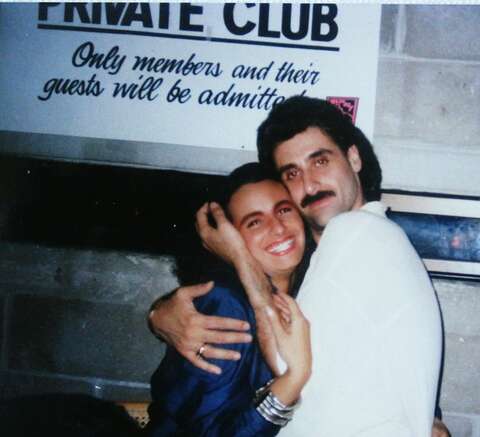 Christina and one of the Paradise Garage's resident DJ, David DePino

"This photo shows a rare moment of David DePino at the front door of The Paradise Garage instead of in the DJ booth. The staff at the club took an immediate liking to me and my brother: they thought is was the coolest thing that we were brother and sister and hung so tight every weekend and were "white people who knew the music and had rhythm." You see, the club was predominately black and Hispanic. I can say with conviction, my years at the Paradise Garage were some of the best experiences of my life. It shaped me in a way almost difficult to put into words. My brother John and I had so much fun before we even walked on to the dance floor, he used to kid around and say 'I got my money's worth in the coat check' although we never paid! 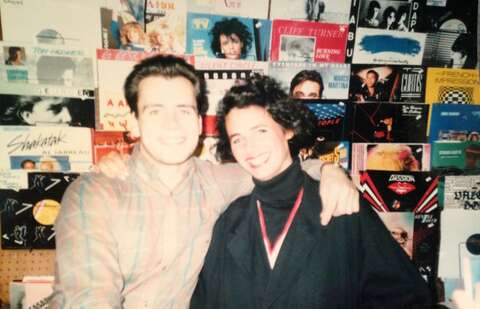 "This brings back great memories of so many hours spent in Vinyl Mania with my friends Manny Lehman and Jerel Black. Vinyl Mania was a record shop on Carmine Street, yet it was so much more. It was such an integral piece of the scene to music lovers and collectors. Manny and Jerel were members of the Paradise Garage and friends with [its resident DJ] Larry Levan. Not sure how they managed it, but Manny and Jerel would be on the dance floor until 8 or 9 am Sunday morning, then leave to go open the store. We'd march right over in our sunglasses after leaving the club at around noon to hopefully score the new songs that Larry played and we loved. We'd remember the approximate time he played them, try to imitate the beat and sing the lyrics. Depending how good you were, Manny would reach down under the counter and present the 12-inch! Although it never sounded the same on our turntables at home, it nonetheless brought us back to that magical moment on the dance floor. That's what is was all about!" 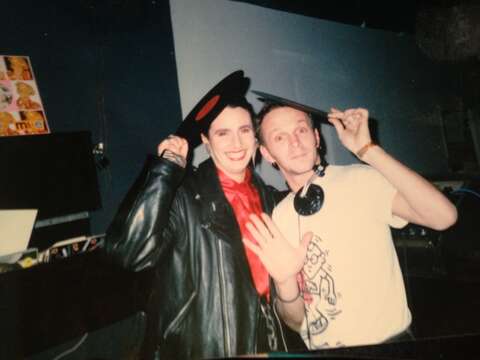 "After the Paradise Garage closed in September of 1987, no one had a follow-up plan for the next weekend. I did."

"Junior and I met at The Paradise Garage through mutual friends, mainly Adolfo Arena who was Keith Haring's assistant. Like all of us, Junior was obsessed with the music but really set his sights on being DJ. Luckily, Keith Haring asked him to DJ outside at the unveiling of his painting at the Carmine Street Pool. I was in attendance and heard him play...he was good!  After the Paradise Garage closed in September of 1987, no one had a follow-up plan for the next weekend. I did. While everyone was crying over the closing, I was busy planning. I gave a party at a place I re-named The Space in Chelsea. I handed out flyers the closing weekend of the Garage. David DePino from The Paradise Garage played the first night. It was packed! Junior was there and begged me to give him a chance. I said yes and the rest is history. Junior walked into a packed party and blew everyone’s mind. From that evening on, we became partners." "We outgrew The Space very quickly, so we found a larger venue and named it Bassline. It was a great space in a commercial building at 21 Hudson Street in Tribeca. From the minute we opened the doors, there were lines around the corner every Friday and Saturday night into the wee hours of the morning. The majority of our staff were former employees of The Paradise Garage, so it felt very familiar and family-like. Junior's music was on fire. Almost every weekend we had live performances from the artists of the moment. Junior and I were good friends with Keith Haring and he was one of our biggest cheerleaders for what we were trying to do. I mean how lucky to have Keith Haring do your invitations! It just solidified that the club was the place to be! One downfall to our success: overcrowding. I used to take a summons almost every week toward the end." It was inevitable we had to close down and find a new, much larger home.” "We were embarking on what would become one of the most influential and renowned nightclubs ever."

"Bassline eventually snowballed into Sound Factory, which opened in July of 1988. Junior Vasquez and I looked at many spaces, but when we walked into 530 West 27th Street, we knew immediately it was THE one! We already had a successful formula: I had the incredible and eclectic following and Junior provided the extraordinary music. Paired with the finest sound system of its day, we had a winning combination. Little did we know that we were embarking on what would become one of the most influential and renowned nightclubs ever. A little historic tidbit: the building was a former sewing factory. The elevated structure that eventually housed the DJ booth was already there! It was the owner's office where he could oversee the factory workers." 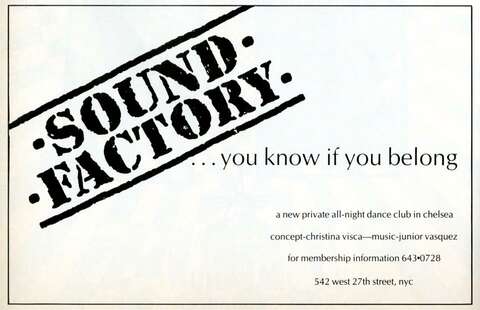 "This was the only magazine ad we ever did and it appeared in Details in the spring of 1988. At the time, Details was the only legit and sort of upscale nightlife magazine. The rest of the promotion was my mailing list, old fashion phone calls, word of mouth, and invitations placed in a few strategic stores like Patricia Field on 8th Street. I was in charge of the memberships. We had membership drives, but you could also purchase one at the club. My brother and I took the photos and laminated the cards ourselves in a little room I set up while the club was in full swing...what fun! I knew I wanted Sound Factory to be a membership club like The Paradise Garage and The Saint that I loved so much. We were not as strict as they were (you could pay a higher price to get in if you got the OK from our door people), yet it gave members a sense of community. That was our goal. “You know if you belong.” Sound Factory was everyone! I don’t think there has ever been a more diverse crowd on a Saturday night for years…ever!"