We chat with the duo Balako from Rio de Janeiro, the new sensation of London label Greco-Roman, before they play at sunset on Sunday, August 19th.

LE BAIN: I read 'Balako’ is an 80’s Brazilian slang word that means “a good type of mess”. Can you tell us more about that word, and about the moment you decide to make it the name of your duo?
BALACO: 'Balacobaco' has been used for quite a long time in the informal Brazilian dictionary, it’s pretty old fashioned and hardly said nowadays. Basically, one day we were walking back from the beach  in Rio and we spoke about starting a party on a boat. I think the first name that came to mind was a pun: ‘Balaco-Barco’. 'Barco' in the case means 'boat'. Therefore it would have been a weird and corny name which equates to a ‘mess on board’. We both agreed and then decided to name the duo Balako. Best thing is that the party never happened. 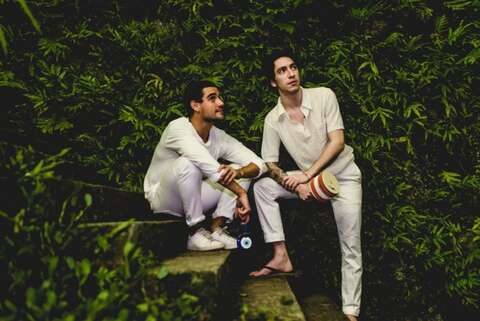 "In Rio, the alternative scene relies heavily on resistance."

You once said "the melting pot of Rio de Janeiro, Bahia, and Los Angeles, [creates] the perfect equation for a soulful and sunny state of mind.” You two are from Brazil, but you actually met in LA in 2015. How would you describe that special connection between Rio and Los Angeles?
The connection between Rio and LA floats around the laid-back atmosphere that the beach provides and how it affects people’s mood. Los Angeles always had a link with Brazilian culture. Vinicius de Moraes, for instance, was the Brazilian ambassador serving in LA during the '40s who later helped create bossa nova. LA also became home to so many Brazilian musicians and artists, such as Marcos Valle, Deodato, and, of course, Sergio Mendes, so there are many connections. Musically, both are a melting pot of sounds due to the diversity of rhythms and musicians from different backgrounds that directly reflect on the vision we have: collaborating with musicians and bringing together different aspects of music.

You've been releasing your first records on Greco-Roman. How did you connect with the London/Berlin label, and what kind of balance does it bring to Balako?
Joe Goddard [one-half of Hot Chip and Greco-Roman's co-founder] was already friends with Rodrigo--they had DJ'd together on prior occasions. As soon as we did "Hora de Balako" and "Nervous Inn", we sent it over to some friends, including Joe. When we got an email back from him, he asked if the tracks were edits, and we told him that it was all our original compositions, played live by musicians. After that, we tied the knot. For us, it’s huge to be together with Greco, and, of course, the relationship does benefit a lot on leveraging our music outside of Brasil and bringing new possibilities and point of views to our work.

You’ve also been making re-edits. How would you describe your approach to that?
We love edits. Our first experiments were edits. We mainly do edits with our DJ sets in mind, but we also give them to some friends who ask for them. A lot of the time, we get in live musicians to create new loops and patterns for the tracks. "Batuque" and "Deixa Acontecer" [out now on NYC label Razor-N-Tape] both have percussionist Junior Oliveira from Samba do Trabalhador.

Tell us more about the dance music and nightlife scene in your city, Rio de Janeiro. Is there a real dance music community?
In Rio, the alternative scene relies heavily on resistance. I must say that I admire anyone who has the balls to produce big parties in the city--it's a chess game to keep it going on. As for São Paulo, the scene is more organized, and even though it also struggles in many ways, there's a lot of variety.

We had a chat with Gui Scott of Gop Tun, and he told us the best thing about the Sao Paulo scene is its diversity, and its weakness is “the political moment we’re living now.” Is it the same in Rio?
Yes, but nevertheless, São Paulo as the financial capital resists more, while Rio was worn out after the Olympics and was left bankrupt. I think right now we're experiencing a rough moment in politics and the country.

Are you optimistic about the future of politics in Rio and Brazil?
I tend to think we always need to be optimistic in order to overcome anything. And as history shows us, in many examples, during moments of bad crisis, important cultural shifts happened. The quality of the music being played and coming out of Brazil right now is very unique and interesting, and I’m sure it’s a matter of time before the world gets to know many of the producers, artists, and DJs. It’s no wonder big brands like Dekmantel have been cropping up here.