On a tour stop in Miami, the French-Cuban, electro-soul duo inspires us to stay hopeful and trust ourselves.
Ibeyi’s music could be classified as electro-soul, but it also describes 23-year-old fraternal twins Naomi and Lisa-Kaindé Díaz. The sisters speak with a wisdom well beyond their years, working from a deep awareness of their heritage while firing into the future all at once.

As natives of both Havana and Paris, the daughters of the late, great Cuban percussionist Miguel “Anga” Díaz and French-Venezuelan singer Maya Dagnino are followers of Yoruba—the West African religion passed down to them from their ancestors. Ibeyi’s music is a rich, layered tapestry of their many cultural influences and experiences. These all shine on Ash, their gorgeous second album on the coolest-of-the-cool-kids label, XL Recordings.

We caught up with Naomi and Lisa-Kaindé when they stopped in Miami on tour and talked Cuba’s future, trusting themselves, and how to stay hopeful in these tumultuous times. Ibeyi's Lisa-Kaindé (left) and Naomi (right). Jumpsuits by agnès b.

THE STANDARD: You grew up partially in Cuba and have a house there now. How have you seen Cuba change as you've grown?
NAOMI: The internet changed quite a lot, because now people are connected. They can talk to their families. But Cuba hasn’t changed a lot.
LISA-KAINDÉ: It’s going to take time.

Are you nervous for that?
LISA-KAINDÉ: Like every Cuban, we're waiting to see what's going to happen. Any time there's a big change in a society, you get nervous. The world is not in good shape, so it's quite complicated.
NAOMI: We're just waiting.
LISA-KAINDÉ: And we're hopeful. We're always saying it's better to set your mind thinking that the world is going to get better. As musicians, we try to find what links and unifies people. This is what we're looking for.

As artists, where do you look to find hope?
NAOMI: It comes from our upbringing. In our family, pretty much everybody's hopeful. We’re positive people.
LISA-KAINDÉ: I guess we were raised knowing we are lucky, and we needed to understand—
NAOMI: There's worse.
LISA-KAINDÉ: Hope comes from art. Every time we feel bad, we go see a movie. Every time we have a problem, we seek answers. [She holds up the book in her hands]. This is the best place to look for answers. Every time we have a weird feeling, we listen to a song. Every time we miss someone, we listen to a particular song—
NAOMI: That makes you cry more! [Laughs.]
LISA-KAINDÉ: And I would say family and friends. They are a small group, but they are essential to our well-being. And after that, I would say doing something. I realized that I am never more hopeful than when I am actually doing something, even if it's small. Helping someone in the street, writing a song that means something to you, that is going to mean something to someone. Doing this album was really what gave us a lot of hope and a lot of strength, especially because it was made in really troubled times. Having big conversations with people, trying to learn the most you can from people… I think that's what really gives you strength and hope. Art, family, and activating yourself. Has your relationship to your Cuban ancestry changed over time?
LISA-KAINDÉ: It hasn’t. Since we were tiny, we were amazed by Yoruba culture.
NAOMI: We grew up with it.
LISA-KAINDÉ: It's a huge part of Cuban culture and art. It was always in our ears and in our eyes. Maybe it changed as we went deeper and deeper and deeper and started singing those chants, but really, it's in our DNA.
NAOMI: It's not like we're wearing these colors and saying these things to be cool. It's the truth and we really believe in it.
LISA-KAINDÉ: You know what is incredible? Yoruba doesn't discriminate. When we sing Yoruba in front of a white audience in Germany—
NAOMI: Or LA—
LISA-KAINDÉ: They just get it. It doesn't ask you where you're from, your color, your age… It doesn't ask you that. It's immediate. You may not like it, but it's for everybody. It has no boundaries. It has no walls. That's something I really like, because it feels like we're in a world where we all put so many walls in between ourselves.

We all come from Africa, and you can feel it when we sing the songs. You feel the millions of people that have sung them before us. [Yoruba slaves in Cuba] were not allowed to talk in their language. They were not allowed to continue praying. They still did it. They were really courageous and they got to make this whole culture continue to exist in Cuba, which is insane. It's revolutionary and special, so there's all of that when we sing Yoruba.

I've noticed that a lot of your lyrics are like mantras.
LISA-KAINDÉ: Yeah, I'm obsessed with that. I realized when I was probably 16 and I heard Nina Simone’s “I Put a Spell on You” for the first time. It changed my life. There was a before and an after that song. I had my headphones on and I heard her say— [She and Naomi sing: "I love ya, I love you, I love you, I love you anyhow."]  And I started suffocating. And the more she said it, the more I would believe it. And I realized the power of repetition. At our shows, we make people repeat "We are deathless" fifty times. [She and Naomi sing: "Whatever happens, whatever happened, we are deathless! We are deathless!"] The first time the audience sings it, they don't believe in it. And the fiftieth time, they really believe in it. Repetition is amazing! It's incredible how you can convince your brain of incredible things. Like, waking up every morning and saying to yourself, "I can do this, I'm beautiful, I'm strong." People will think it's bullshit, but it's true. And we don't do it. We should.
NAOMI: I'd never do that!
LISA-KAINDÉ: We should! I should do it. Now saying it, I should do it. Your first languages are Spanish and French, but "Me Voy" is your first song in Spanish as you largely write in English. What is it about writing in English?
NAOMI: With English, it's easier. It's a direct language.
LISA-KAINDÉ: But it's harder to write in English now because everybody has said everything in incredible ways. And it's really rare when I listen to a song in English and I'm like, “Fuck, this has never been said.” So that's our work now, trying to find a way to say things in English that haven't been said thousands and thousands of times. And it's quite difficult. Finding what you want to say is really hard.

Your song “No Man Is Big Enough for My Arms," which works in clips of Michelle Obama’s famous 2016 speech, is incredibly powerful. I read you took the title from the book Widow Basquiat about Basquiat and his widow Suzanne Mallouk. Could you talk about what that means?
LISA-KAINDÉ: [Suzanne Mallouk] said it at seven. A boy said, "One day I'll come back and I'll marry you." And she looked back at him and said, "No man is big enough for my arms." Wow. Seven!
NAOMI: I'm gonna raise my kids like that!
LISA-KAINDÉ: Yeah! Even if she was 80, it would've been incredible. She lost that when she met Basquiat. It took her twenty years to get it back. And I think that is the message. We are born so strong and then there's something that happens. I don't know if it's society, our own desires, or education… Something happens and we start having the power taken out of ourselves. And we become scared or we feel that we're not enough. We don't trust ourselves, and I think women should start trusting themselves. Lena Dunham said something incredible: "Women are raised to distrust themselves and to trust everybody else." And that is so true!
NAOMI: So true!
LISA-KAINDÉ: We [wrote this song] because we need to remember it! With all our songs, we are not preaching.
NAOMI: No, no, no!
LISA-KAINDÉ: It's not like we have it all figured out and we’re giving it to you. We need these songs, maybe more than you guys. We needed to feel deathless, we needed to feel like no man is big enough for our arms. We needed to sing them every night, and we needed to see people singing them. 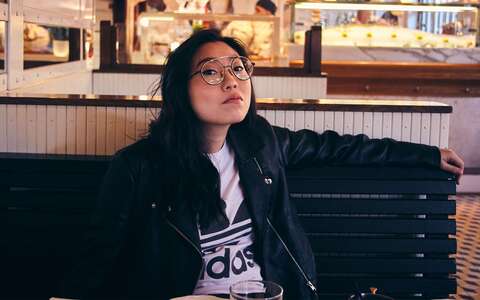 Three Sheets to the Wind with Awkwafina The Politics of Peaches