The teenage Compton native has already been nominated for a Grammy as a member of The Internet, released a phenomenal solo EP, and written an instrumental for Kendrick Lamar, and he’s just getting started.
You know that dream you had when you were 13—that your favorite rock star, or rapper, would meet you and think, “This is what I’ve been missing!” That happened to 19-year-old Steve Lacy.

As a kid growing up in Compton, he started producing and recording beats solely using his iPhone, and he still uses his phone as a primary recording tool to this day. His sound is singular, eclectic, and guitar-driven (a genre he describes as “plaid”), which led him to join the Grammy-nominated, genre-bending band of LA cool kids, The Internet. Since then, he’s released his first solo EP, gotten a track on Kendrick Lamar’s DAMN., and solidified his status as one of the most exciting, raw talents coming out of LA these days.

Standard Culture caught up with Lacy to find out what it’s like to actually live out every kid’s fantasy, the meaning of “plaid,” and where he wants to go from here. 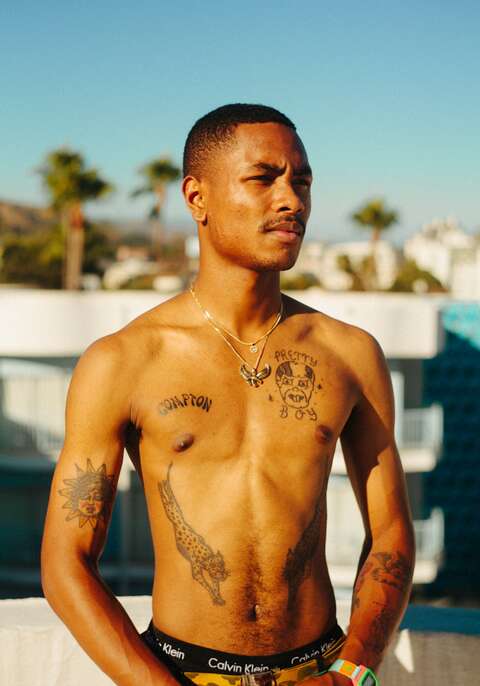 THE STANDARD: Who were you before your music career started taking off?
STEVE LACY: I was a 10th grader. A high school kid. I went to, like, four different high schools. I thought each year would be better. For 9th grade, my mom forced me to go to Washington Prep for the jazz band. If that didn’t happen, I would not be here right now. Thanks to Mom. That was where I met Jameel Bruner who brought me into The Internet. That was the year I fell in love with music.

Why was music so important to your mom?
I come from a family of singers. My whole family—my cousins, my auntie—we all can sing. I guess she wanted me to keep going.

What was growing up in Compton like?
Living in Compton—from the perspective of traveling and seeing other places—you come back and appreciate it more. I remember being embarrassed when I’d say I lived in Compton. But traveling and seeing other places made me appreciate the hood. I feel safe in the hood, which is ironic to some people, but I love it. It’s home.
Watch Steve Lacy perform "Dark Red" from a room at The Standard, Hollywood with Syd and friends

When did you start singing?
I started singing when I started hanging around with [The Internet]. I’d never made music or anything, I was just chillin’ in those environments, seeing how it’s done, taking it in. When I started making stuff, I was like, "Alright, let me sing these hooks I have in my head." But I didn’t want to be a singer. It just felt weird.

Do you ever have a creative block with music?
All the time. Normally, I’m making beats every day. There will be a day where it just doesn’t come. And, after couple more days, I just get so depressed, like, “What the fuck?! What if a new idea doesn’t come again?” It’s the scariest thought. When I’m uninspired now, I just go find some new stuff to be inspired by.

What’s most inspiring right now?
A lot of Prince, actually. Old Prince cuts—he’s got so much. Elliott Smith—his songwriting is so beautiful. You just want to get as sad as him, even on a happy day.

You’re 19 years old. Do people in the music industry treat you differently because you’re so young?
Never. I guess when I first started chillin’ with the band, everyone was like, “Awww, it’s the little homie.” They still treated me like I was one of them, and their age. Now, I’ll be in sessions and it’ll be someone I look up to a lot and realize they really embrace the youth. I’m super grateful to be in that position. I guess I just have a mature aura about me, but I’ve always been like that, even as a little kid, just chillin’ with older folks. Around all the kids my age, I feel like an old man. You describe your sound as “plaid.” What do you mean by that?
It’s hard to put a pin or a label on my sound because I don’t stay on the same thing for too long. Plaid is the closest thing I could say because I’m a sponge of so many artists. I can say it’s a series of sounds—Brazilian, West Coast, rock, jazz—it’s all of that in one. Plaid is multiple sounds coming together to be a good sandwich.

One of things people talk about with you is that you use your phone to make music. Is your story a technology story?
I guess it’s kind of a kid story—a kid with ideas story. A lot of people would be like “I can’t make music with just an iPhone.” But I feel like the best art comes from when you don’t have nothing.

So, you don’t feel like phones are ruining our lives?
I’m not mad at it. They didn’t have this shit back in the day. I’m taking advantage. I can make an album on here, I can meet different people. I’ve met so many different artists that I look up to on Twitter. Not through a manager—through Twitter—artist-to-artist connection. So, I love it. I’m for it. What was it like to work with Kendrick?
You know, we’re from the same city, so I heard of him pretty early—7th/8th grade—and I was a fan off the top. I’m friends with DJ Dahi. He was like, “Yo, I gotta get you in the studio with Kendrick.” When the jam session was over, I played [Lamar] this one track, and he was like, “Yo, put your number in my phone. I need this.” He hit me up later to remind me to send it to him. I didn’t bother him about it after that. When the track list for [Kendrick Lamar’s record DAMN.] leaked, I saw my name in the credits, and I was like, “Wow I really made it.” It went through. Unreal. Crazy.

What changed after DAMN.?
It didn’t fully hit me until I was in London with The Internet, and I walked to Starbucks. The song was playing in my headphones and I’m just, like, bawling my eyes out, walking down the street by myself crying. And I get back to my hotel, and there’s a big ass DAMN. billboard across the street from my hotel, “Pride” is in my headphones. It was like, “Wow. I really did this.” But now, I’m back like it never happened, to living my regular life.

What are you looking forward to?
I don’t really set goals or anything, I just kind of blow in the wind. I never look forward to anything—if it happens it happens. I know the pattern of getting excited and it not happening. I know that I can be better always, and that there’s more to learn. I’m looking forward to learning new things—seeing growth for me and my friends. I’m excited for the future. Songs from a Room: Helado Negro at The Standard Spa, Miami Beach The Dogmas of DJ Harvey