Last month, Lorely Rodriguez, who makes music under the moniker Empress Of, performed at The Rooftop of The Standard, Downtown LA. She was on the West Coast for a couple weeks in preparation for the release of her debut, Me, which came out a few weeks back to a blast of critical acclaim. In a stroke of kismet, the album’s brooding, booming, undeniable single is called “Standard”—which we’re taking as a shout-out, even if it totally isn’t.
Previous Next 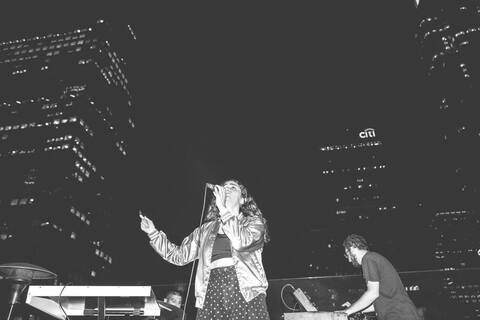 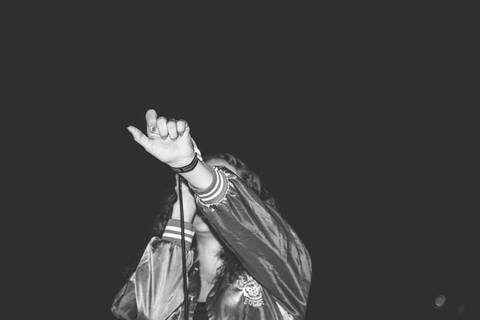 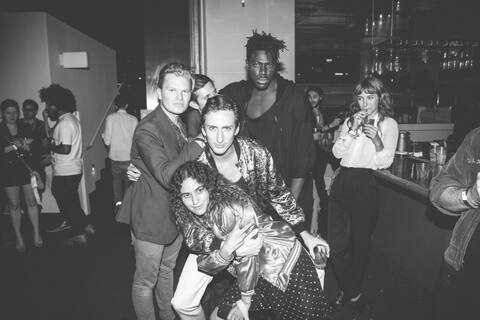 Me is a remarkably accomplished debut—one that thrusts Empress Of firmly in the company of her forbearer, Björk, and her contemporary, Grimes. Extremely confident, sonically rich, a mix of experimental textures and pop and dance sounds, the most striking feature of the album is Rodriguez’ voice, which soars, swoops, and flutters through intricate electronic backdrops. It’s the sound of someone forcefully stepping out, asserting themselves, claiming space.


The day after The Rooftop show, Aussie-photographer Ryan Kenny hung out with the young electronic musician, and when Lorely returned to NYC, she sat down for a chat with Raquel Berrios of the New York-based band Buscabulla. They met up on a late summer afternoon in the park, with the sounds of kids and cars and birds as their backdrop to talk about a whole range of topics: from knocking over Jimmy Hendrix’s priceless microphone to the influence of telenovela theme music to singing in front of the mirror.
RAQUEL BERRIOS [BUSCABULLA]: I wanted to ask you: Do you say Lor-a-lí? Or Lor-e-lí?
EMPRESS OF: Lor-e-lí.

Do you like your name?
Yeah, I love my name. OK, so let’s talk about the making of the new album. I know the basics of it—you went to Mexico, to Valle Del Bravo, alone, during Christmas time…and you recorded this thing. Did you record demos?
I got the seeds for all the songs. Yeah, demos. I spent a month writing it in Mexico. Then I spent 9 months fleshing out those ideas, in Montreal, New York, and LA. Bouncing around.

Did you record in studios?
I just did it all on my laptop.

I saw you recorded vocals at Electric Ladyland [Studios].
That was the only organic thing on the record, so I really wanted to bring as much life as I could to that part of recording.

…You wanted to get on those expensive microphones.
Yeah, dude. It was Jimmy Hendrix’ microphone that he bought in the ‘60s for his studio! The first day I was tracking, I tripped on it and knocked it over, but the engineer caught it and I was like, “Ohh my god!” Because it’s a priceless microphone. He sang into it, like, his spit is on it. Adele recorded 21 on it. Arcade Fire recorded Reflektor. So it’s like…I just wanted that to be very real. Vocals are really important on the record. They’re the message. I just wanted to do it—no bullshitting.

The vocals sound gorgeous, really beautiful.
It was a really good process. I usually record my own vocals, and I hate doing it.

That’s interesting. The first album you used a lot of reverb.
Yeah, [I was] hiding behind sounds. With this record, I wanted to expose myself, and be like, “I’m here, these are my stories.” I didn’t want to hide behind anything.

How did you make that decision? Was it through things that you saw other people doing? Or that you just got better as an artist, and as a singer?
When I first started writing, it was sort of shallow. I was just making sounds because they sounded good. With this record, when I was in Mexico, I wanted to write about things that are important to me and not care about textures and sounds, but just be like, “what do I want to say?”

I noticed that your aesthetic has gotten a lot more minimal with this record—the cover, the video. It’s funny because it seems like, in general, things are getting more minimal. In music, Dev [Dev Hynes, Blood Orange] is an example of someone with a minimalist sensibility. Do you think it’s because there’s so much technology, that in the end, the real artists are the one’s who can sing well and write good songs?
I don’t think so. There’s just all kinds of artists. There are the bedroom producers. There are people who aren’t really performers, who just make really great records. But also, I think [minimalism] is a style that’s very pleasant today—even with stuff on the radio—how, like, DJ mustard is making tracks with, like, finger snaps and one bassline. He’s owning it. And even Lorde stuff is just, like, high hats, a bass, and her singing. You have so many options, and so many ways to do things, that the only way that I’m not gonna regret this when I’m older is to just be as sincere or as direct as possible. You can call that minimal, I guess.


What do you think the differences are between LA and New York?
I grew up in LA, and I lived in NY for the last four years, and now I’m moving back in December. I’ve been thinking about it a lot. I thought people weren’t going to be on their hustle as much in LA because the weather was so nice, and everyone just chills. I don’t know why I thought that. People are grinding so hard. But it’s different because there’s not as much pressure of, like, this is precious. Everyone’s down to collaborate and be creative. But I love New York and LA, obvs, for separate reasons.

"I developed like 17 layers of skin living in New York and having to deal with so much bullshit. It really trains you for life."

What has your transition been like from an unknown to a known artist?
I still feel like an unknown artist. Even as much as I’ve been doing this, and all the hard work, every day I wake up, and I think, “There’s so much work to do, and it’s never gonna stop.” But that’s the way anything you love should be. You should work hard to pursue your dreams. It’s never going to be easy.

What about your live show? How do you go about it? What is it that you want to project?
I’ve been thinking about that a lot because I’m going on my first solo tour in North America. I’ve done all of North America three times as an opener. So I’ve been thinking about my show, and I have two weeks to set it up. I can’t play half an hour as a headliner. So how do I do an hour of something that’s a show. I have my record which is the bulk of what I’m presenting, but I never think [the show] has to sound like the record. I don’t think that’s the purpose. It’s like you’re going to see a play or something: how you arrange the live set, how the lights are looking, how it sounds, how it transitions from song to song. That’s how I think about a live show. So that when you leave you say, “I understood her and what she was trying to get across.” You shouldn’t walk away from a live show being like, “oh cool, that was the record.”

Do you ever rehearse in front of a mirror?
Yeah, all the time. I think I’ve done that a few times. It’s always so helpful.
You realize how awkward you are—how your mouth looks when you’re singing. It’s important. Every part of the visual thing is taken in as much as the music.

How is being Latin a factor in your music? Do you feel that your heritage makes your art more exotic somehow?
I think about being who I am, and the kind of music I make. Or just, like, hanging out with my mom last week when she was at my shows…she’s a little woman from a village in Honduras. If she hadn’t moved to America, I’d still be in a little village. There isn’t very much variation in culture there. And living in LA and NY, I was influenced by so many things, and I was exposed to so much. It’s crazy that I’m doing what I’m doing. And talking to my mom, there is a generation gap. There’s a whole cultural difference, but I get to share it with her. Growing up, around the house, there was salsa and merengue. Now it’s my turn to show her electronic music and rock, whatever I’m listening to. My culture is a huge, huge, huge part of who I am as a person, and that doesn’t detach from who I am as a musician. It’s hand in hand.

The first time that I heard your music—when I heard “Hat Trick”—I thought it sounded like the opening credits of a telenovela—there’s this really romantic sensibility. It sort of evoked that in a really bizarre, abstract way. All that I could do was wonder if that was where it came from, or if I was making it up. Do you feel that being Latin, you can identify where those things influence your music?
When I choose to do something, there’s a lot of intent. When I make songs, I’m like, I really want this to sound like this, or I want to sample this. A lot of my songs are not directly influenced by Latino music, but there are songs that are. The B-side of my EP is definitely like that, but because I chose to do that.

But with the songs on this record, I didn’t do that because I had a whole other thing I was trying to say. I’ve made songs where I’m like, “I’m gonna chop up a Cumbia sample because this is a really important song to me.” It just didn’t fit the concept of Me as a record.

What about singing in Spanish?
I just want girls in Central America, to be like, “I look like her and she sings in Spanish, and I can get a laptop and make weird music some day.” Obviously I like singing in Spanish because my mom likes it, but there’s other things.

Let’s talk about the songs of the summer.
I love Fetty Wap. Fetty Wap is so good. I just spent a few weeks in LA and everyone is super crazy about rap right now because of Straight Out of Compton. I heard so much good rap. But I heard a lot of Fetty Wap in the car. I’m obsessed. His singing voice is incredible. It’s so weird and refreshing and unique. That’s my new thing that inspires me. I was shooting a video last week and the director was like, “you look tired.” So we blasted Fetty Wap, and it was like I drank four coffees.

What other songs won you over this summer?
Do you know Majical Cloudz? They’ve got a new song out that’s really cool, called “Silver Car Crash”. It’s about dying in a car crash, but it talks about it in such a beautiful way. I can’t believe the lyrics. Who knew dying could be so beautiful?

What about pop?
There’s this song called “Cheerleader”—it’s so fucking good. The first time you hear it, you’re like, it’s so cheesy—but it’s the songs that have that simple thing. “Where Are You Now”—the Beiber song—every time it comes on I just melt—so good.