Whether or not Empirical Spirits intends to disrupt the liquor category, they can’t help themselves. Founded by Lars Williams and Mark Emil Hermansen, alumnus of one of the world’s top restaurants, Noma, today the duo put their fermentation knowledge to work on a grain-to-distillery in Copenhagen—now available at The Standard. 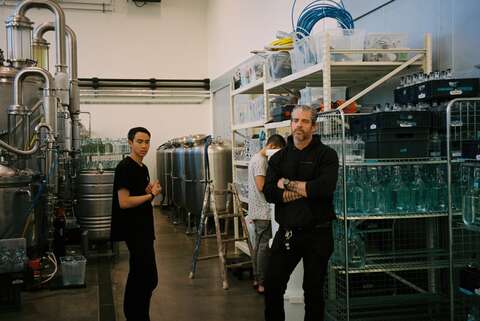 In a way, Empirical Spirits brings a challenge for bartenders and their customers: what to make of a spirit that uses yeast from beer, but is fermented with the koji, the way we find in sake? What is it, even? Whether or not Empirical Spirits intends to disrupt the liquor category, they can’t help themselves. Founded by Lars Williams and Mark Emil Hermansen, alumnus of one of the world’s top restaurants, Noma, today the duo put their fermentation knowledge to work on a grain-to-distillery in Copenhagen. The packaging, while simple and sparse, also imbues humor and a political backbone (a recent addition was called "FUCK TRUMP AND HIS STUPID FUCKING WALL”). But beyond the unusual flavors and infused imbibements with deconstructed oysters and freeze-dried gooseberries, the premise of Empirical Spirits is extraordinarily simple. Bring seasonality to the beverage space, the same way it’s found a movement in food. The rest will follow. We spoke with Lars Williams to tell us more.

"It always baffled me when products would stay the same all year long. It just doesn't resonate with how I wanted to work." - Lars Williams

Something your team is passionate about is bringing seasonality back to the alcohol industry. Can you speak more about the Empirical foraging practice and some of the different ingredients you work with that vary by season?

Whether or not we are bringing anything back to the alcohol industry, I can't really speak to. Empirical really works with seasonal ingredients because, well, that's when you get the best stuff right? It always baffled me when products would stay the same all year long. It just doesn't resonate with how I wanted to work. Back when we started, we were doing a Douglas fir and Juniper spirit called "Easy Tiger". The fir tasted great but only at certain times of the year. It just didn't make sense to compromise and keep producing something that wasn't at what we considered its prime. There are certain windows of time when things blossom and we probably only collect enough to make 20 liters of spirit but that's fine. I don't ever see us moving away from that. If we think it tastes great but we can only make five bottles, we're still going to do it.

I know you worked at Noma as head of R&D exploring fermentation, but what made you want to finally jump from your chef work to owning an alcohol brand?

It's all about flavor. I was looking for a way to take what I did in terms of fermentation, flavor development, research, and find a way to democratize. What I mean with that is if I create of a rolodex of flavors that I think to represent Denmark, I want to be able to share it with my family back home in Brooklyn. Or send it to my friends in Brazil or whatever. Alcohol is a fantastic vessel for flavor, it not only gives flavor shelf life but also binds flavor in a completely different way than oil. I know Empirical uses heirloom koji (which is usually in sake!) and is a nontraditional move for beer fermentation. Why was a meeting of eastern/western techniques important to your practice?

The point of Empirical is to share flavor as widely as possible. We've always considered it more like a flavor company than a spirits brand or distillery or anything like that. The use of koji stems from the work I'd previously done in Japan and my various travels in the region. It was clear from day one that we wanted to create things by layering flavors on top of each other, rather than trying to make store-bought bulk alcohol taste like whatever. We found that koji was a great backbone for this construction because it does so much more than just give you yeast edible sugars. It also does a lot of the heavy lifting when it comes to creating flavor. It’s another layer of fermentation, which adds a complex organic flavor compound that couldn’t otherwise be created. Also, we have a whole lot more coming in the next few months that has nothing to do with koji.

One of your more recent creations is named "FUCK TRUMP AND HIS STUPID FUCKING WALL." You don't normally expect to see an alcohol brand taking a political stance.

Yeah, we're probably not going to win any diplomacy awards for that one but honestly, we had this habanero spirit we were trying to name. It was that week where pretty much each and every headline you saw was about the policies that were separating Mexican parents from their kids and we just decided to call it that because that's what we felt like. Five minutes later we printed the label and stuck it online. The Alcohol and Tobacco Tax and Trade Bureau took a moment to let that one through.

"We thought a lot of the categorization and the various accompanying rules were pretty archaic. We just want to do our thing and share flavor as widely as possible and make delicious things." - Lars Williams

Do you get push back from taking a more holistic approach, not easily categorized by a liquor store wall shelf label?

Really what we are doing is not about trying to change an industry, we get a ton of inspiration from a lot of the fantastic craftsmanship in the spirits game. We thought a lot of the categorization and the various accompanying rules were pretty archaic. We just want to do our thing and share flavor as widely as possible and make delicious things. There really isn't much more to it than that. The categorization thing only seems to be confusing prior to people actually tasting the stuff, once they taste it the questions stop. Most bartenders are telling us that the only thing you can use categorization for is shelf placement. They're way more into the story and a product tasting good. Which hopefully we have both of. I think we'll be seeing a lot more spirits that fall outside of categories in 2019 and I think that's going to be exciting to see. Fashion Fetes the CFDAs at the Top of The Standard