Los Angeles-based artist John Knuth is the latest artist to tackle the 6th Street Mural at The Standard, Downtown LA. We sat John down and asked him about the mural, his favorite LA hangouts, and what it feels like to be a viral video star.

STANDARD: Your mural design is based on a new series of paintings you created using smoke flares. What's your process like?

JOHN KNUTH: I've been making paintings and photographs using emergency smoke flares. Traditionally, these flares are used to signal for help when somebody is in distress. I first started using them because I liked the idea of somebody’s final gesture as a creative gesture. The smoke flares are an incredible sculpture/performance. They temporarily fill a space and then disperse across an environment.

The photo for the Standard mural is called Faded State. It’s an image of the smoke from an emergency flare shot with a flash against the night sky. The light from the flash isolates and makes the orange colored smoke pop against the black sky. “Faded” alludes to being high and “state” has the double meaning of a place of being and the state of California, which is often overwhelmed by wild fires.

Did the size and public nature of the 6th street space influence your process?

It's very exciting to be able to produce something so large! Generally, the photos I take are 4” x 3” Polaroids. At that size the smoke images are like little jewels. The mural is about 100 times larger so it will be interesting to see the results.

The installation comes at a time when a lot of Southern California is burning to the ground. A few special places like the San Jacinto Mountains and Idyllwild have been evacuated because of wild fires. It is a tense time for the environment. I'm curious if anybody will draw parallels from the smoke of the fires to the smoke of the photograph.

There are so many great murals in LA. I wish the taggers would stop painting their shitty doodles on them! One of my favorites is the John Wehrle mural on the 101 freeway north of downtown called Galileo, Jupiter, Apollo. It's a painting of an astronaut floating in space with ancient ruins around him. It's a great image. The Frank Romero mural of the cars next to it has just been refurbished and is bright and beautiful.

What’s your favorite adventure so far in your career as an artist?

For a lot of my recent work I've been going to The Sultan Sea, Saline Valley and Joshua Tree to utilize the open spaces and create my smoke flare paintings. I’ve had some pretty great adventures.

MOCATV recently produced a video on a new series of paintings in which I raise 250,000 houseflies to make paintings for me. I feed them a mixture of watercolor paint and sugar, which the flies eat and then regurgitate onto the canvas. The video got a lot of attention and went viral on the internet. It got picked up by Huffington Post, WIRED, Boing Boing among other websites. That was exciting.

Describe your perfect day in Los Angeles. Where would you go? Eat?

There would be a lot of territory to cover in the perfect LA Day. I'd go for a hike with my wife (interior designer Taylor Jacobson) to Henninger Flats in Altadena. Afterwards I would have a drink at The Rancho and buy sausages and cheese at Roma Deli. I may stop in to Pie 'n Burger in Pasadena. Then I would head west to Venice Beach and go swimming in the ocean. We would have a snack at Hinano. I always get the grilled cheese on white bread with American Cheese and potato chips with a Stone IPA.

There are some incredible galleries and artists to see in LA right now. I would probably go to a few openings at some friend’s galleries: International Art Objects, Carter and Citizen, François Ghebaly Gallery, Greene Exhibitions are just a few in Culver City. The Mandrake is a great place for a cocktail down there. 5 Car Garage very cool private gallery in Santa Monica. Ambach & Rice, ACME, Cohen Gallery, Mark Foxx, Another Year in LA, and Pepin Moore are also great places in mid-Wilshire and Hollywood.

We live in Echo Park and frequent The Shortstop, Taix, El Prado, The Sunset Beer Company and El Compadre. Downtown we like the Rooftop of The Standard, Downtown LA for its great view and we go to Cole’s and the Redwood Bar & Grill often.

What’s up next for you?

I have a show opening at SOD Gallery in Copenhagen on August 23rd titled Elevated Uncertainty. It is a new series of smoke flare paintings and polaroids.

I am doing a couple of prints with Intellectual Property Prints.

I have been invited by my friend Dawn Kasper to do a show in October at Human Resources in LA. It is an incredible space with great programming.

Faded State, John Knuth's installation for the 6th Street Mural at The Standard, Downtown will be on display through the end of November. 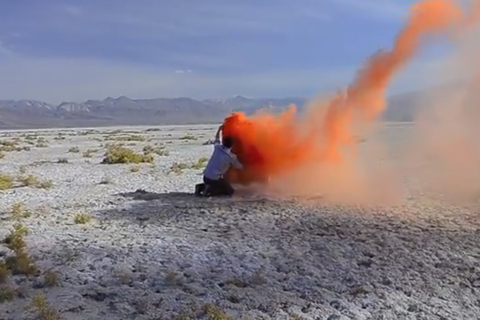 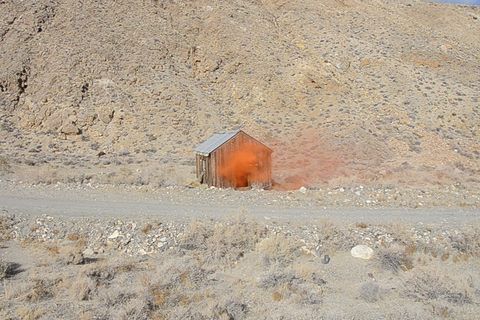