One might wonder just how, without ever touching her instrument, the ethereal Dorit Chrysler can make such beautiful sounds. She plays an early 20th-century electric device called the theremin which, after a fit of Googling, we are still at a loss to fully explain. Something to do with electromagnetic fields and etherwaves, but more on that later.

We had the pleasure of meeting the lovely Ms. Dorit when she performed this past week at The Standard, East Village. Chrysler's eclectic musical career includes a vocal début at the age of 7 at an Austrian opera house, a rock band at the age of 13, side-by-side billing with Marilyn Manson, musical collaborations with the likes of Neon Indians, and, most recently, a more classical turn towards the mysterious theramin. We sat down with her after sound check to learn more about this fascinating instrument.

Standard Culture: The theremin is still very under the radar. How did you discover it?
Dorit Chrysler: I was introduced to the theremin at a friend’s house. Because it is still fairly obscure there are no set rules when approaching it, so I thought that it opened a lot of interesting venues. I was really just being creative and experimenting. There were really no limits to what I could try to do so it was very appealing.

How long ago was that?
Eight years ago. It takes a while to get somewhere with it.

You had been a musician for many years prior to that...
Yes! I had a rock band for many years. I was playing guitar and singing and really felt kind of limited and I also thought if I pick up the theremin, ya know, even at age 70 you can stand on the stage and maybe bend towards a more classical repertoire. But there are so many different angles that you can take. It didn’t limit me to any genre or style. I thought it was really interesting.

How did the music world react to your new act?
Well, it causes a tension. Just like it did when it was invented in the early 20s. It still has such an unusual and spectacular way of playing it. You have your hands in the air and don’t touch it. So, it causes a tension. Which can be good or bad. But some people that know it are pretty opinionated. They’ve heard it sound really dismal or make noise. So they kind of disregard it as a serious instrument. In a way I try to incorporate it as one of many aspects into my musical work, but I also feel obliged to pay tribute to the instrument and show a little bit what it can do so that people give it the respect that it deserves.

When you are playing the instrument does it have anything to do with energy kinesiology?
It’s very physical. I mean, one wonders. It's an electromagnetic field and it's just very physical and very internal. Like the voice. Every motion of yours, even the tiniest motion, translate into sounds. So if you’re nervous, or you have a bad day, or if you’re happy you can hear it. So in that sense it is a very spiritual instrument and it's really almost like dancing. It’s very much about body control. All the parts of my body translate into sound for the theremin. It’s an extension.

Débussy's Clair de Lune, is transformed on the theremin.

Let’s talk about the experimental side of your music… Do you find that it’s more supported in Europe versus New York or L.A.?
That’s a really interesting question. I am always surprised that I find people working with the theremin in the most remote, odd places in the world. I find Scandinavia is very eclectic and down with the sound, but is more minimal and almost too dense for them. New York of course is a great city. They’ve seen it all. The inventor Léon Theremin was living in New York in the 20s. He was the toast of the town. So actually New York has a strong history with the theremin. I’m also the cofounder of the New York Theremin Society.

What are the messages or themes that you are trying to share with your music?
Autonomy. Autonomy! Liberty and openness. Explore fearlessly and be creative. Whatever makes people excited is fine with me. 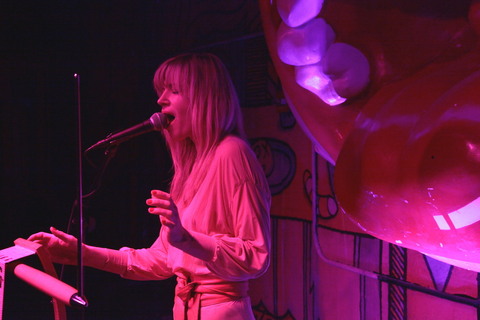