Annie O’s live music series in the Penthouse of The Standard, East Village is a smart bet any time of year, but in summer it’s a must. We can’t think of anywhere we’d rather be on an early summer evening than up on the rooftop, drink in hand, listening to the live sounds curated by our East Village music maven. The vibes are very real and you should come experience them for yourself.
On Tuesday, June 20th, Annie O's bringing Brooklyn-based dark folk trio Wilsen to the Penthouse alongside Gordi. The band’s leader, London-born Tamsin Wilson, met her bandmates at Berklee School of Music, and soon after, they released their first LP, Sirens. This past April, they released their second album, titled I Go Missing in My Sleep, and they’re coming to the Penthouse to show it off in all its grand glory. Read Tamsin Wilson’s interview with Annie O to get you ready for big night.


ANNIE O: Your latest album, I Go Missing In My Sleep, was released this past April. Tell us about its title.
TASMIN WILSON: The title was pulled from a song named “A Parting.” It references how most of the tracks were written and recorded in the later hours of the day.

Do you write all your songs together?
I write a good portion solo but some are co-written. The arranging and producing processes are entirely collaborative.

What was the process like writing and recording this album?
The entire process spanned about a year in various studios and configurations. After the songs were written, Johnny, Drew, and I spent a couple weeks upstate developing arrangements. Producer Ben Baptie and drummer Eric Read joined us for the last few days when we tracked basics. We went on to finalize parts at another studio outside of Philadelphia and the remainder of the overdubs were recorded in our apartments. I think by the end a lot of the final vocal takes were actually captured in my closet.

Where was the strangest place you ever wrote a song?
Unfortunately nowhere that weird...I haven't written many beyond my bed or sofa. I write a lot of lyrics on the subway. Does that count?

Are there any tracks by other artists you currently have on repeat?
“Mary” by Big Thief,  “Still Life” and “No Hands” by Lowly, and “Roller Skates” by Nick Hakim.

Where is home for you?
Currently New York, but I have roots in both England and Canada.

Summer touring plans?
We’re playing shows in the Northeast for the next month, and in August we’ll set off on a full North American tour.

If Wilsen had a superpower, what would it be?
Teleportation. Preferably with all the gear.

What can we expect from your show at The Annie O Music Series?
Songs from the album in a more electric vibe. We love playing in New York, especially in the summer, so hopefully that translates, too.

What's next?
Writing the next record and looking forward to getting back into the studio in the fall. 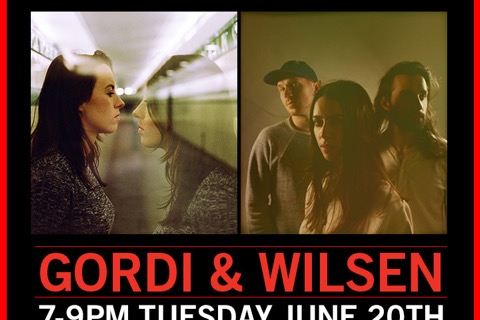 Brujeria 101: Harness Energy to Get What You Want