James “Blu Jemz” Sheffield-DeWees and I met sometime around 1991. We were both students at LaGuardia High School for the Arts aka “the Fame school.” It was an amazing place where all the artsy, weirdo and, of course, very talented New York City kids ended up. We were exposed to so much beautiful diversity from such an early age. One of the things James and I had in common from the beginning was our passion for music. He was constantly navigating all the different scenes in New York and taking part in as much as he could. He was way into the rave culture that was huge at the time and we both were in love with rap music and the Native Tongues in particular. If adolescence is a period of self-discovery, James seemed to already have it figured out. Going clubbing every week (in those days being underage was not an issue), buying records at Vinyl Mania and Rock n Soul and eventually making beats and releasing records himself with his first group Sight Beyond Light. During his early adult years, James worked at a multitude of different places where musical worlds would collide, including a particularly influential stint opening up the Turntable Lab store in LA. James knew everyone. He managed to weave this incredible web and all sorts of people from different worlds got caught in it. Through the force of his magnetic personality, he coaxed people outside of their musical comfort zone and introduced them to new sounds. I really admired him for that.

It’s a rare thing to grow closer to a childhood friend as the years go on. Most people lose touch and only see each other at reunions or weddings. But James and I formed a tighter bond over time and soon, we felt it our duty to keep New York’s club scene exciting. Especially after the horrid bottle service era! James had a great party at a place called Table 50 with Mark Ronson and Q-Tip. I used to go every week and get there early to hear James spin. We realized that we were both way more interested in dance music than anything else at that point and by the mid/late 2000’s started trying to throw our own parties. After bouncing around from venue to venue, we ended up at Le Bain with our partner Lloydski and a legendary party was born. 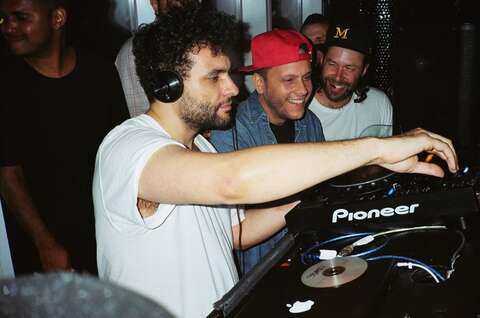 Night People began in 2011 and I will never forget the Saturday nights we shared on the roof of the Standard. We could sense that there was a new generation of kids coming out who were excited to hear anything other than the basic, genre specific dance sets of New York’s recent past. I feel inspired just thinking about it. James’ exuberance behind the booth was a magical ingredient. He was the embodiment of everything that can be transcendent about nightlife: Inclusiveness, a wildly open mind and infectious energy. He taught me so much, not least of all to loosen up and live more in the moment. Since James’s passing, a lot of people have told me how influenced they were by that party and moment in time. I’m immensely proud of that. And he would be too.

James was the driving force behind everything we did together - his passion, his commitment, his genuine interest in devouring all that was new or unknown to him—and it’s hard to imagine continuing without him. All I can do right now is reminisce and listen. If you didn’t know James, these mixes will give you a bit of a glimpse into who he was and the music he loved. But it’s a small window as his love for all types of art, music and film was endless. As long as we keep sharing stories and sounds like these, he will always be with us.