On Friday, October 21st, the bluesy English rockers of Palace ascend to The Penthouse for their first US show. Annie O asked the band a few questions to get us all familiar before the big night.

Tell us a little bit about your debut album So Long Forever. What was the writing and recording process like?
We're really proud of it. It feels like a super honest representation of us as a band. It still retains all of the sound we started with three years ago, but it's bigger, bolder and more epic.

Getting in the studio was an amazing experience with a cool dude called Adam Jaffrey. It was tough at times, but what we've learned is that it's part of the journey. There were definitely moments where we wanted to cave each other's heads in with our guitars

How long have you been a band? How did you meet?
We've been together in Palace for roughly 3 years. It was just started as a fun thing on the side of the other stuff we were doing. We'd meet at a tiny rehearsal space in Camden for a laugh and to play music for ourselves; we never dreamed we'd get to where we are! It's crazy. It was so hot in the studio we'd play in our underwear. We've known each other since being back at school when we were spotty little rascals.

Tell us about the place in London where you're based. What are the biggest musical influences over there at the moment?
Palace HQ is at a run down old warehouse space in Tottenham that we share with about seven other bands. There's lots of amazing music coming out of that place. It used to be a crack den and still has that scuzzy feel; it's where we recorded our first two EPs. I think at the heart of the place is a serious blues vibe. There are unreal blues guys there who are big on the London scene. We love our blues. We throw rowdy parties once in a while that are insane. There are queues up the alleyway and all the bands there perform. The Halloween one we did was nuts. I want to play in NYC on Halloween.

What's the most British thing about you?
Ha. We love cricket. Doesn't get much more English than that!

If you could collaborate with any artist (musician or not, living or dead) who would it be?
George Clinton. Him and Bruce Campbell from Evil Dead.

Is this your first show in NYC?
Sure is. We're like kids in a sweet shop here. You can probably spot us a mile off as tourists, beaming smiles and pointing at everything. We frickin’ love this city. We got very very drunk last night.

What's your favorite thing about New York?
The crazy energy and the fact that it's actually exactly like the movies, it's so weird. Also the fact that there are amazing bars playing amazing music on every block. We had a Led Zeppelin marathon last night.

Are there any specific tracks that you are currently listening to?
Lemon Twigs’ “As Long As We're Together.” We're obsessed with them.
And also Otis Spann’s “Ain't Nobody’s Business.”

What can we expect from your performance at The Annie O Music Series?
Heartfelt songs with a sprinkle of blues.

What's next? Are you currently on the road?
Yeah, we go on tour all of November, ending with a huge show at Brixton Electric on November 24th. Oh, and our album is out on November 3rd! Crazy.
Previous Next 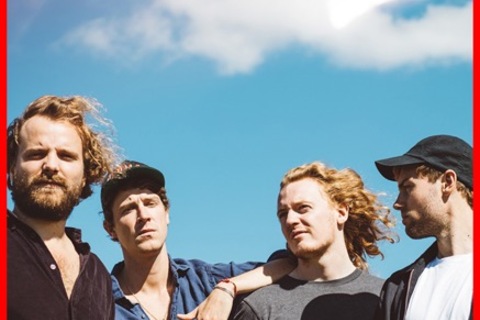