We have a secret weapon at The Standard in the form of a French-Moroccan music maven named Annie O. After years in the music industry representing such greats as Lou Reed, Philip Glass, Laurie Anderson, Pearl Jam, and Peter Gabriel, we nabbed her to curate The Annie O Music Series, a regular concert series in the airy Penthouse of The Standard, East Village.

On Tuesday, May 17, Annie brings Ghana's Okyeame Kwame to The Penthouse for his first solo show. His nicknames Rap Doctor and Ghana's Best Rapper Alive (the latter of which he gave himself) should give you an idea of his larger than life personality. Formerly of the rap group Akyeame, he’s now pulling a Gwen Stefani and going solo, and The Standard is his first stop as he takes America by storm. Annie sat down with the Ghanaian wunderkind.

ANNIE O: Can you explain a little bit about the music culture in Ghana?
OKYEAME KWAME: The music industry in Ghana is a very interesting one. It started from our traditional music that used to be called osibi, which is characterized by the use of indigenous instruments like flutes or trumpets made from cattle horns. Immediately before independence, instruments like guitars and keyboards were introduced, and Ghanaians played indigenous rhythms with them and developed this new type of music called 'high life'. High life music was a fusion of Latin, pop, and the Ghanaian indigenous rhythms, and it was played to entertain the colonist masters, so it was music for the upper class. After independence, high life music became pop music in Ghana because everybody could afford it. Down the line, hip hop became the genre, and hip hop and high life combined to make hiplife. Hiplife is the most popular genre of music in Ghana for the young people.

What were the inspirations for your solo project and how did it come about?
In 2000, my group Akyeame became the biggest rap group in Ghana, and we were the first ones to win an award in Ghana. After that, my father died. I was so devastated and young, and I didn’t know where the next pay check was coming from, so I came to live in America, where I lived for 3 years. When I went back to Ghana, I had found myself. I had made a decision that I would be a musician until I died, and my partner in Akyeame did not feel the same, so we started fighting about direction, strategy, and moving forward. Because of that, I went solo. I wanted to be fully responsible for my actions and inactions. I released my first solo album and it was a major success. I’ve been solo ever since. The inspiration for going solo is to be myself and to be able to pursue my goals to their full potential.

Are there any artists or specific tracks that you’re currently listening to?
Currently I’m listening to Bruno Mars, Daranas and Damian Marley, Bob Marley, Usher, Wizkid from Nigeria, Sarkodie, and Stonebwoy. I’m trying to introduce my children to Michael Jackson, so I’m listening to him constantly. I’m listening to a lot of high life, because that's the thing that tickles my heart strings.

Not only are you a recording artist, but also you have a communications company, a record label, and a fashion company. How do you fit this all in, and is there something in particular that is taking priority now?
I’ve been a musician for 19 years, so I think diversification is a must now. I split my energies between my family, art, the communications company, and the record label. I also went to school to get a master’s degree in marketing strategy. I think my family’s first, because I do all these things for my two children and my wife. They are the motivation. You're currently a Ghana Health Ambassador. Can you tell us a little bit about your work in that area?
In 2010, I was crowned the best overall artist in Ghana, and as part of that, the Ministry of Health became my affiliate. I would make television commercials to talk about malaria and HIV, and I worked with USI AID. I realized that my potential wasn’t fully optimized, so I got on my own train, and I chose hepatitis B as the disease that I was going to fight against. I formed a team of doctors, and we started moving from city to city organizing free clinics to educate, screen, and vaccinate hepatitis patients. It’s been going on for 7 years with the Ministry of Health, and I have personally screened more than 7,000 people and vaccinated more than 5,000 people.

Are you planning any more US shows any time soon?
Currently, the upcoming tour dates I have are in Germany, France, UK, and Italy this summer. Hopefully, either in December or next summer, we will do something amazing in America. This performance at The Standard, East Village is very significant to my career as industry players and movers will be coming to watch me. I’m actually a bit nervous, because I’ll be performing for a different crowd.

If you could collaborate with any artist right now, who would it be?
My top picks would be Alicia Keys, Nas, J-Cole, and Wizkid from Africa.

How did you get your nickname Rap Doctor?
In 2000, I came to America to perform at the Apollo Theater. Before the performance, we went to a club in NY called the Lion’s Den—an alternative Jamaican club—and I did a performance with Reggie Rockstone. The audience couldn't understand the rap, but they could feel the vibe, so they asked me to explain the rap to them. When I did, it was so eloquent that the Jamaicans said the way I explained the rap was like a doctor. I then got the name Rap Doctor.

What can we expect from your upcoming show at The Standard, East Village?
It will be 100% live, and it will be African, royal, poetic, cool, and make you dance. Expect the unexpected. You know that African music will move you, so expect to be moved emotionally and physically.
Previous Next 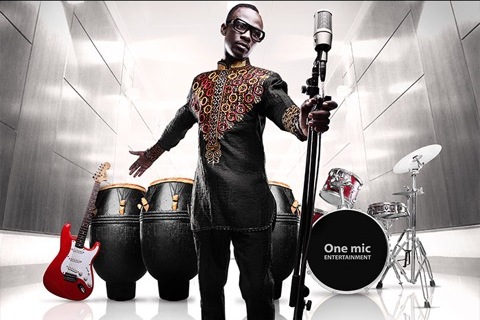 From Dum Dum Girl to Kristin Kontrol: A Transformation