On Sunday, December 4th, Annie O's bringing New York-based singer-songwriter Arum Rae to The Penthouse for an intimate performance. Before the show, the two got together to talk about Arum Rae's new album, touring with the legendary Sugarman, and what to expect on the big night.


ANNIE O: Tell us  about your EP. Where was it recorded? How long did it take to complete?
ARUM RAE: The EP was recorded in Austin, TX. It is the precursor for a full-length album. It took about 6 months to record, master, and print up

The songs all feel so intimate, stripped down, and raw. Is there a particularly personal song on the EP?
All of the songs are pretty personal, yes. My two favorites would be "Heaven" and "War." The song "War" describes the state of helplessness I feel when it comes to violence and war. I feel very alive and triggered by it, but dead at the same time, because there's nothing I feel I can do. I imagine this must be how a soldier and/or victim might feel. Also, "Heaven," because I've lost close people to their addictions or demons, and it's a plea to them.

I hear so many big sounds from jazz, soul, and even the great girl groups. Were there any specific artists or eras that influenced you this time around?
Yes, I've always been hugely influenced by Nina Simone, Etta James, Aretha Franklin, Otis Redding, and Bill Withers. I studied Ella Fitzgerald and Billie Holiday big time, too

Tell us a little bit about your time in Austin, TX.
Austin was wonderful for me. I got to play ACL, SXSW, open for Willie Nelson on his New Year's Eve party, and play at his ranch with Gary Clark, Jr. I also got to sit in on a Spoon recording sessions and experiment and grow in my own personal writing. I love the giant sky of Texas and bright sunshine. I go back more often than not.

You have a long resume of working and performing with artists such as Willie Nelson, B.B. King, and The Kills. In what regard did you work with these artists, and do you have a particular highlight?
These artists are amazing, but my most favorite and recent experience was with Sixto "Sugarman"Rodriguez. I opened for him on a sold out tour across Canada and some cities in the US. The shows were at beautiful theaters with the best audiences. I played solo and then he played solo. It was just his family and myself back stage, so it was very intimate. He was one of my favorite artists and writers before this tour even came about. I listen to him daily (not an exaggeration), so when this opportunity came, it was so surreal! Also, my conversations with him enhanced my love for him. He is a genuine and timeless artist.

Is your song "Loners" autobiographical? Would you call yourself a loner? Do you think all artists are loners to some extent?
I kind of think all people are loners to some extent. I may be a loner, one foot out the door, but this song was more in spite of my ex who always had an exit for himself. I don't want to be that way. I love people too much, and when things get so intimate they can also come off as binding, therefore causing some to retract themselves. As I grow older, that action makes me sad.

Are there any specific tracks by other musicians that you have on repeat right now?
I have El Michels Affair on repeat! I definitely listen to them daily. Also, A Tribe Called Quest's new record is perfect. I also listen to Nina Simone, Rodriguez, and Bill Withers daily. And I usually listen to Dustin O'Halloran and Nils Frahm almost every morning.

If Arum Rae had a superpower, what would it be?
To end poverty and all war.

What can we expect from your performance at The Annie O Music Series?
I will be performing solo with my electric guitar, so please expect an intimate performance. [Laughs.] And thank you in advance for having me!

What's next?
Finishing my album!
Previous Next 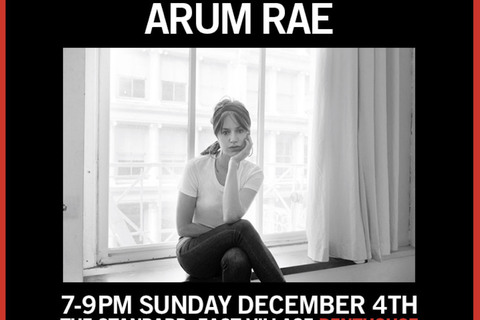