Unless you were unconscious yesterday, or otherwise indisposed, you probably noticed a lot of people wearing red. Or maybe your spouse or your boss went M.I.A. That’s because, yesterday, March 8th, was A Day Without a Woman, a strike in conjunction with International Women’s Day. The strike sought to “spotlight the indispensable role women play in the daily functions of life in all of society, through paid and unpaid, seen and unseen labor.”

In cities around the world, from the U.S. to Pakistan, Senegal, Bosnia, and Hong Kong, women were encouraged to take the day off work (if they could), shop exclusively at small, women- and minority-owned businesses, and wear red in solidarity. In New York City, diverse women (and men) from all ages and backgrounds rose to the occasion converging on Washington Square Park.

The rally featured a host of powerful speakers with an intent to “solidify a solidarity that is more loving than any other coalition we’ve seen before,” and NYC protestors stood resolute in their defiance of any anti-feminist agenda. As feminists ourselves, The Standard team was there to support the cause, and we took the opportunity to ask our fellow protestors about what had brought them out. "I’m striking to call attention to the problems of women today, because I think it’s extraordinarily important to represent the gains that we’ve made—how important it is to get out that message to women who don’t consider themselves to be a part of the feminist movement—to the risk we’re facing under the Trump administration—the roll back of reproductive freedoms, the affordable care act, and the diminishing of federal projects that enhance all of our lives." —Miriam Brody, 76, retired professor

"Reproductive rights are so important to women and it should be a decision made by women, not by men who are in tight suits in Washington, D.C." —Noelle Doyle,14, student
"I really want to stand up for women’s rights because we’re treated more as things than humans who have emotions. We’re undermined and we should be given more rights and speak about what we believe in." —Kaila Fernandez, 14, student

"Over the course of history, we see these amazing women fighting so hard just to have a right as simple as voting that men didn’t have to think twice about. And now we have a president that brags about sexually assaulting women like it’s OK." —Anna Gavilan, 13, student

"In my lifetime, I hope to see that women get equal pay and that we’re treated equally as men."  —Hannah Hagopian, 15, student 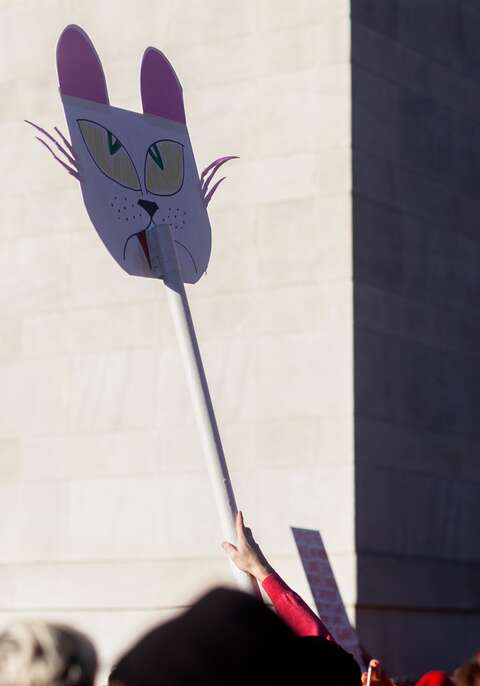 "I was very lucky that my boss let me take the day off to strike. I work in the entertainment industry and UTA gave women their blessing to strike, so a lot of companies followed suit." —Cara Lie Chrisco, 30, talent manager

"I am striking for my little sister who just moved to Taiwan and is teaching there. I strike and walk for her always." —Lindsay Kimball, 30, actor

"There was a hint a week ago that Oprah Winfrey was considering [running for president]. I think she would be an amazing option as someone who has built a brand on helping people and doing ethical business as opposed to someone who is known for unethical practices." —Daniel LeBlanc, 31, restaurant industry

"One day without women is impossible, because we rely on women for everything. I think the world would be shock at how everything would come to a halt." —Mallory Walker, 19, student "I am inspired to march by children because I don’t want them to live in a world filled with hate, inequality, and misogyny." —Christie Walker, 55, high school teacher

"I love the song 'Flower' by Sonic Youth because of the line 'Support the power of women, use the power of man.' I think it’s important to use the power of a majority to get the word of a minority into the world." —Connor Walker, 17, student

"I'm striking for my mother. She is a single mother and a professor in D.C. As a woman of color, she experiences the brunt from a lot of the policies that the administration is trying to put into place." —Wes Haus, 25, publishing