A few months back, the members of TV on the Radio converged in LA to headline the Air and Style Festival. With members now split between the coasts, the show was an opportunity for the group to work on new material. While they were in town, they came by The Standard, Downtown LA to kick back and do a couple songs stripped down for the latest installment of Songs from a Room. As a band that made an indelible mark on the New York music scene of the early 2000s, it was slightly surreal to see them very much at home in LA. But as we learned from talking to lead singer Tunde Adebimpe after the shoot, LA is feeling more and more like home these day, and in some ways, more and more like the New York they once knew.

THE STANDARD: What’s the setup for TVOTR these days? It seemed like the band was converging in LA when we shot the video.
TUNDE ADEBIMPE: Dave and I are in LA, and Jaleel is between here and New York, and Kyp is still living in New York. The setup these days is only different from the start in that now it involves plane tickets.

Does getting together usually happen in LA?
Dave’s got a studio out here, so that’s the most convenient place for us to do it.

How long ago did you move to LA?
Two and half years ago. My wife works as an animator and she got a job, and it was a time to take a break from New York.

How does Dave [Sitek’s] role in the band work?
He’s a band member primarily, which means we’re all writing songs together, sitting in a room—basically getting stoned saying, “This sounds good, that sounds terrible, we thought this sounded good for nine hours, but now we realize it sounds terrible.” We’re all in it together. The word producer is somewhat nebulous with him and TVOTR because he’s a band member and producer. Ultimately, when we all come into a room and throw everything down, he’s the last man standing. The role he plays with TVOTR is “I’m not going to let this out of here without it sounding like we want it to sound.”

What stage are you guys in right now with new music?
We’ve started writing, and later this month we’re going to write a little more.

What are your goals for the band at this point, and how do you go about revising those goals as you approach each album?
Every single time we start, I feel like we’re starting from zero, which is the most exciting place to start from. Like, when we made the very first record, Dave and I had a bunch of four-track tapes and then we made an EP. And then Kyp joined the band, and we were starting from zero again. Making Cookie Mountain and having that be something people responded to—when you’re done with that, you’ve completely exhausted those thoughts, ideas, sounds. You generated them, lived them, and burnt them to a crisp in a purifying fire. You’re like, “I brought that out of nothing, and I turned it back into nothing so I can do this new thing.”

My only goal—and I don’t want to speak for the rest of the band, but at this point I feel like I can—is to make something that we would like to listen to that doesn’t seem like it’s pandering to anyone. There’s enough noise in the world. The goal for us is usually just to make a record that we think is good. There’s a lot of shit-talking that goes on while things are getting made—constantly, constantly. To get to a point where no shit is being talked on anything is a great point.

TVOTR has always been pretty vocal about political issues. Is this political climate filtering into your writing at all?
I’ve made a concerted effort at specific times to not write about political situations, but then you look at it and you realize that’s what the song is about because it’s just present and in your face. It’s harder to ignore it than it is to talk about it—America, etc. Is there some sort of Kickstarter campaign to have a question mark permanently affixed to the word "America"?

I don’t particularly think that music can save a government or a country. If it could, it would have a long time ago. There’s been some amazing protest music, and amazing music period, that should have enlightened all of humanity if that’s the way that it worked. I don’t think it works like that. It can open a portal where you can take a rest from the seemingly eternal chaos of life and re-center yourself and then come back out of it and feel more grounded heading into the chaos. And that might help you navigate it better and see a way to make things better for yourself, spiritually and psychically, and therefore, better for other people, spiritually and psychically.

"I feel like my preconceptions started getting fuzzier way before I moved."

It seems like a lot of the musicians who were making an impact in New York in the early 2000s have moved to LA.
When I came out to LA before I moved out here, I’d end up running into friends more often than I did in New York. It’s tough to be in New York, and suddenly realize your community has been scattered by city blocks being bought up and performance spaces being closed down. That’s not to say that there’s not a ton going on in New York. For me, and for a lot of my friends, though, something had just washed through there. I moved after that winter where the polar vortex had descended. I know that a lot of other people broke out after that, too. The advisory was like, “If you go outside, keep your eyes and mouth closed.” I thought it was a stupid ass cliché, but I actually don’t want to think about the weather—there’s other stuff I want to think about.

Have you found that there’s a vibrant music scene in LA?
It just feels like are doing their thing, playing music here, and no one cares if anyone sees them. It feels a little freer. I don’t know if you knew this bar-slash-venue Zebulon [in New York], but they’ve opened up out here and the space is huge and beautiful, and so many people who who got their start playing there are out here now. I feel like it’s going to be really important. It’s crazy because they were a block away from our studio in Brooklyn. Their building got bought up two years after ours. Everyone just got knocked clean out. Now they’re here, 15 minutes away.

The musical landscape has shifted a lot since the time when TVOTR was coming up. It’s hard to imagine some of the bands that you guys came up with rising to the top now. Do you think that pendulum is going to swing again?
I don’t know. Anything’s possible. The saving grace of something dominating is that people get sick of it. There might be a little fissure where the sell-by date on all that stuff just shows up.

Did you have preconceptions of LA before you moved out? How did your preconceptions match up with actually living there?
I feel like my preconceptions started getting fuzzier way before I moved. I started coming out here just to do work or visit friends, and Dave moved out here a while ago. The parts of LA that come wafting toward you immediately are Hollywood—Hollywood of the '80s, the excess, the bad fashion, hair, everything fake and overblown. But LA also had such a vital underground in the late '70s and early '80s—Black Flag, Destroy All Monsters, Mike Kelley, the art scene. And then, NWA, the Black Arts movement. Those are the parts I started thinking about whenever I would get a chance to come out. The Hollywood side of things is a very small part of it. So I feel like my thinking that everyone in LA was like Baywatch faded way before I moved. It started to feel a little more like New York had felt just in terms of who was out and making work. It seems like a good time to be out here. There’s so much to discover and I’m very open to it. I think a while ago I wasn’t as open to it because New York seemed a little more grounded and solid to me. Now everything’s a fine mist. Songs from a Room: Buscabulla at The Standard Spa, Miami Beach 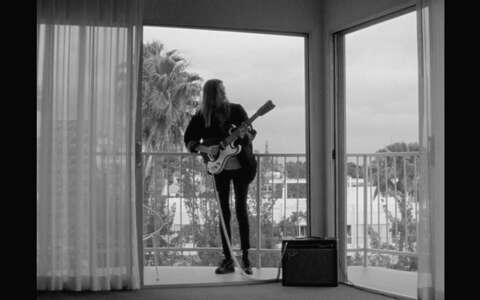 Songs from a Room: Okay Kaya at The Standard, Hollywood