Last year, the writer and literary curator Fiona Alison Duncan was road tripping to her hometown of Montreal when she spotted a sign: “Pillow Talk”. For a while, Duncan had been thinking about how, for many people, complicated conversations about sexuality were only happening anonymously online, and that even actual “pillow talk”—conversations between lovers in bed—largely failed to include thoughtful wondering about sexuality.

Duncan took the sign as a calling, swiped the name, and when she returned to LA, she pitched The Standard a new series. Hosted (appropriately) in-room at The Standard, Downtown LA, Duncan describes Pillow Talk as “community organizing on sex, love, and communication.” Pillow Talk aims to start conversations that require focused listening, the occasional clearing breath, and plenty of awkward wondering.

Given the proliferation of complex issues related to sex, sexuality, sexual abuse, and gender in 2017 and 2018, the timing couldn’t be more relevant and necessary, and last week, Duncan hosted the series’ inaugural installment, “A Lay of the Land of the Laid,” a panel that included me, Tierney Finster, sex journalist for magazines like Playboy and MEL; the activist Alice Barker of support.fm; writer and sex educator Ana Cecilia Alvarez; psychotherapist and Soulfriend Radio host Gaea Woods; and Samuel Muglia, the stylist responsible for casting Eckhaus Latta’s pornographic ad campaign.

With Pillow Talk, Duncan has set out to create an intimate space for people to share the nuances of their sexualities, helping to reform traditional, inaccurate ideas about the binary, inflexible nature of our sexualities. In short, she’s set her sights on nothing less than finding ways to replace our fucked up sexual culture with something better.

We sat down with Fiona to hear more about the inspiration for Pillow Talk, the importance of physical touch, and the way trauma can alienate us from pleasure. 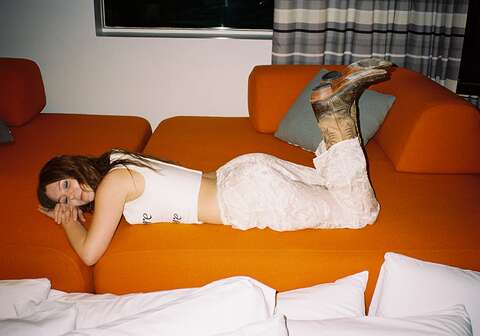 Photo by Niko Karamyan
TIERNEY FINSTER: How old are you and what is your star sign?
FIONA ALISON DUNCAN: I’m 30 and a Virgo sun, Leo Moon, and Scorpio Rising, which gets me in trouble.

Why do you think it’s important for people to get together to talk about sex face-to-face with people they may never sleep with?
I think a lot of us are talking about sex in real life, not just online, but through gossip, behind closed doors, or after a few glasses of wine, that sort of thing. But we don’t talk about most of this in the public versions of our life and I think there’s a desire for it. You can fake bravado and confidence online, for instance. I’m thinking about people who share hate online, like men’s rights activists, who speak and act differently than if they were looking you in the eyes. We can all choose what we share online, but in person, it’s this big, messy package. It’s very revealing. For example, I’m much more confident in my writing than online. These events test and develop my confidence towards being a body and a voice who is really in the world. A full human.

Also, it’s really hypnotizing to listening to people talk. There’s a different space hearing people talk about something rather than reading about it. Writing is fast. We can’t speak that fast, so we have to collectively slow down and really listen to what people have to say. In general, I think a lot of people are alienated and want to meet someone new.

What was your favorite part of the first event?
I really liked this question from a French woman in the audience, who after listening to our panel discussion and the larger group conversation up until that point, asked why Americans are so obsessed with terms, identifying our gender and sexuality. She basically thought we over-complicate things by defining them. The impression I got was that she goes through life with a sensuous mobility, and that for her, heady language about sex and identity would feel stifling or distracting compared to our instinctual bodies.

We have these animal bodies that have developed over many millennia that have urges and what not, that’s true. But we also have all these social and public experiences of sex where we’re coerced or abused or limited in the way that we can express ourselves. Life is sexualized, and it would be useful to unpack that, but we often don’t because of shame or simply lacking a safe space to do so. That has kept me from having a healthy sexuality for a long time. For example, I’ve never had a male boss or colleague who has not tried to sleep with, or date me, since I was 14 years old. These pervasive, but minimized dynamics should be talked about. Pillow Talk is meant to be a space where topics that really tenderize people can be talked about and supported. 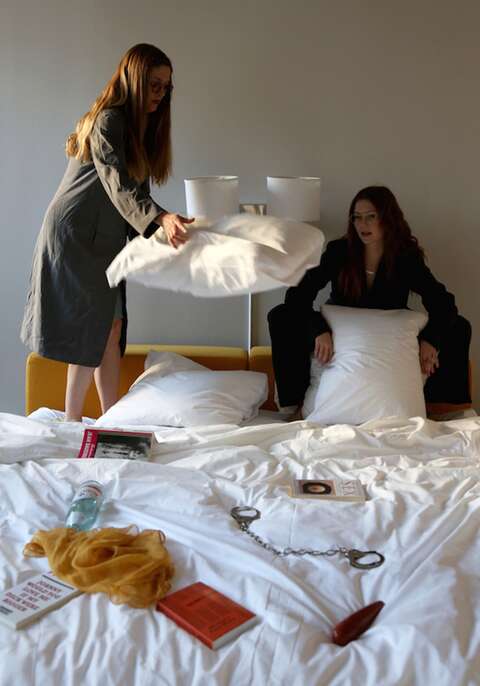 Top left and bottom by Gillian Steiner. Top right by Niko Karamyan.
Do you consider sex, intimacy, and exchanging touch to be important to an individual's overall health and well-being?
Yeah, during our tour of their factory, our sex toy sponsor, Doc Johnson, was saying that there is a big rebranding happening in the sex toy industry, where it’s now called the sexual wellness industry. Personally, I’m a holistic person in my approach to health. I think it's like, mind, body, spirit… all of it has to be communicating because there has to be a fluidity between them. When one of them is off the others overcompensate.

I tend to overcompensate cerebrally, cutting off the attention to my body. I'll eat well, but at one point last week when we were taking photos and you cuddled me a little bit, I was like, "Whoa, I have not been touched in months," which is so fucked up. I wasn’t touched a lot as a child, so I will block myself from touch and it will literally make me sick. I get stress illness when I abstain from touch too long.

Has that experience made you more eager to facilitate conversations about pleasure and desire?
I think the goal is dismantling all that separates us from our human right to pleasure. I think that pleasure is a natural, physical wonder, it’s freedom and ecstasy.

Do you have any goals for your own sex life?
A friend of mine wrote me an email recently. She’s queer and in love with a man and was talking about how they have sex that is genderless and totally equitable in power. They've managed to create some sort of sensual dynamic where it’s just immersive, weird, touchy-feely, intense, like cosmic pleasure-dome, and I don't know, that sounds really cool. I want something like that.

Tierney Finster is a writer, model, actress, and filmmaker from Los Angeles. Winner of the DIScrit 89plus grant, she has written extensively about sex and love for magazines such as Playboy and MEL. Finster will be bringing her bodies of knowledge and pleasure in form to Pillow Talk regularly as a co-host, secretary, reporter, and curator.


Fiona Alison Duncan is the host and founder of "Hard to Read", a reading series at The Standard, Downtown LA that launched in October 2015 that has hosted over a hundred artists, actors, and writers, including Amalia Ulman, Chris Kraus, Mackenzie Davis, and Hannah Black.