Born and raised in the Bronx, Richard Alvarez has been a fixture in the New York art, fashion and nightlife scene, since moving to downtown Manhattan in the 1980's as a teenager. After hanging out with Jean-Michel Basquiat, Keith Haring or Madonna, working with Patricia Field and becoming part of The Standard Family, he developed his unique style as a painter. With his new solo show "A Feeling as Well as a Look", he celebrates his friends and inspirations, many of New York ball culture.

THE STANDARD: The opening of your exhibition was like a Who’s Who of New York nightlife from the 1980’s to today! It was such a beautiful day in New York City. How would you describe your state of mind that evening?

RICHARD ALVAREZ: Besides the glorious weather, it was finally time to meet and socialize. I’d wanted an opportunity to show my current body of work and have been patiently waiting it out, so besides the elation of being in a proper gallery space with portraits of some of my long lost friends, it was an opportunity for my community to meet and carry! I was hopeful and full of gratitude for the moment my smile muscles hurt after from being so happy.

And it’s not just a who’s who of New York nightlife that was in the gallery, it also was on the walls. The exhibition shows a series of painted portraits of people that had a tremendous influence on the New York scene and beyond, especially a few key personalities of the ballroom scene, including members of the House of LaBeija, Willi Ninja, David Ian Extravaganza… And all portraits are presented like divinities with a “disco” twist, it’s very colorful and playful. Is it an homage? A celebration? Both?

I think it was what the viewer takes away from the experience. My intention was to create a space where some of our lesser known Queer ancestors can be revered, adored and spoken of. The inspirations came from Haitian sequin-covered “Drapo Vodou” (or “voodoo flags”), basically talismans. Included in the template was the Japanese design guru Shiro Kuramata who designed using many different materials but captured my attention with his glass and acrylic work. I grew up in an Orisha house and am Dominican so it’s really my heritage I sought to emulate. Shiro’s work caught my attention and has always been a template for me.

I find it gorgeous that you thought it had a disco twist! I tend to dance in front of the portraits to see it shimmer and sparkle, so there is definitely an element of movement one participates in to take in the full effect. We as a species have been dancing around fires conjuring up spirits so add a disco soundtrack and VOILA that’s what I’m all about! 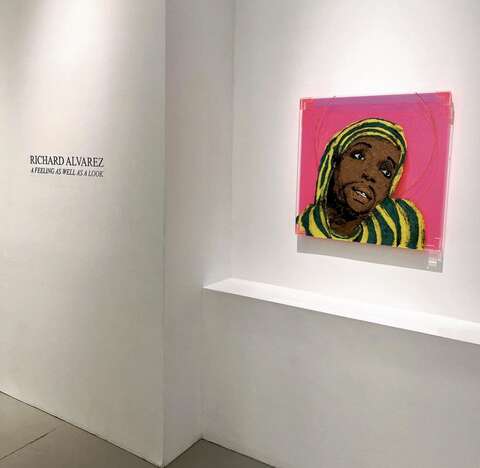 "It was with purpose and intention to highlight my friends, allies and family [...] So many important people get lost in history." – Richard Alvarez

As a teenager you became part of the downtown art scene of the 80’s, which was basically the center of the world at that time! You hung out with Jean-Michel Basquiat, Keith Haring, Madonna, who have become universal pop culture icons. The “icons” you show in the exhibition might not be as popular, but their influence has been huge. Tell us why and how you picked that specific casting of characters.

It was with purpose and intention to highlight my friends, allies and family. It’s always a community effort so these universal icons, as amazing as they are, had a support system which allowed for their talent to manifest. So many important people get lost in history. Angelo Colon was considered family by Grace Jones, she was he and he was her, they played off that and to have witnessed it had a huge impact on gender norms for me, also the fact that they were POC and playing by their own rules was equally important. Juan Dubose was Keith Haring's lover, he was important I think because he showed Keith the Paradise Garage and introduced Larry Levan to him. So many little threads that connect the cultural dots creating many of our current scenes. Those bold faced names are important, but the backstories deserve their day as well. I must stress that history is such a slippery slope. I may have seen and experienced a particular moment and someone else there has a totally different rendering, so it's so subjective, add the prospect of big money and foundations and the stories are framed in a very different light.

You were raised in the Bronx in the 1970’s… Another center of the creative world at that time, it’s when and where hip hop culture was being created. What memories did you keep from your childhood, pre-downtown New York? What kind of influence does it have on your art today?

My sister had to drag my brother and me around to all the jams she wanted to attend. She was a dancer and could spin for days (one of the important moves in the hustle). She was stuck with us. When you're in the makings of history it never seems like that – at least to me it didn’t – I saw the formation of Hip-Hop and cutting up (sampling) which was music to dance to. I wasn’t aware that it was so important until much later. It was a day at Jerome Park for me. She took me to a house party once and I distinctly remember Karen Young’s “Hot Shot” being played and really losing myself in the beat, it was where I found myself! Unless you’ve gotten lost in music you have no idea how empowering it is. After that first hit I wanted more! Religion has played a major role in my life denying and later realizing how formative it's been. Comics, Kung Fu movies, Malcolm X, Dr. Buzzard and The Original Savannah Band… All of it! "History is important but I've seen the distortion of stories crafted to fit a safe narrative so everything is suspect and meant to be destroyed, especially nostalgia!"

For someone who has been at the center of the cultural and creative world throughout your life, do you still feel New York is the place where everything happens?

NYC is a cultural center, but we’ve moved onto a global stage so there are other important hot spots. What sets NYC apart is dreams are allowed and encouraged.

I don’t feel your work is very nostalgic, and you do not seem like a nostalgic person. Am I wrong?

I'm so interested in bringing a new view into the conversation. Why do anything someone’s already done? I was taught that if you can't bring it,  don’t bother! Come correct or stay the fuck home. History is important but I've seen the distortion of stories crafted to fit a safe narrative so everything is suspect and meant to be destroyed, especially nostalgia!

There is a lot happening in your paintings, different layers of colors, glitters and plexiglass. Can you tell us how you developed that specific technique? What does the technique tell us about the content?

I originally wanted to work with mirrors. The idea being creating an image that the viewer would then be a part of, so again experience and draw the participant into creating an individual narrative. I couldn’t quite get the production right so I started experimenting with glass and recently acrylic. I always planned on utilizing glitter. The process developed and grew into its current manifestation. I can't wait to see where it goes.

Music is important enough for you that you had the NY duo The Illustrious Blacks, perform on the mezzanine of the gallery during the opening. Tell us how music influences your creative process as a painter.

Oh my god! Can we talk about how BRILLIANT they are? I've watched The Illustrious Blacks become this amazing force and knew I wanted a component of my dance roots thrown in. I meditated (I know so hockey) and imagined the perfect set up, they were my fantasy sitch, I was harkening to Keith Haring's show where he’d have Juan Dubose (a brilliant DJ himself) spin during his opening so I wanted that layer updated and was swooning when they agreed 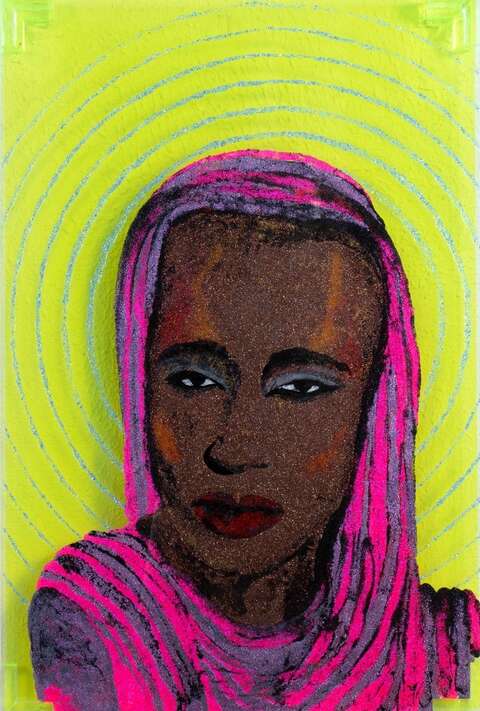 The title of the exhibition “A Feeling as Well as a Look” could be a motto for someone doing the door of a trendy New York club. For you who have done it for Boom Boom Room and Le Bain, do you agree? If not that one, what would be your door motto?

The title comes from one of my favorite artists, Lorraine O’Grady. I saw it in one of her pieces and it spoke to me cause ya gotta give a look and create a feeling or is it the other way around [Laughs]. Working a door in NYC has always been about being generous and kind (though I can turn it really quick) so I don’t think I have a blanket statement other than “It's not gonna happen, have a good night”.

You’ve been part of The Standard family for a long time, both in New York and Miami. Is there a story you would like to share about your connection to The Standard, that makes you feel in sync with it?

I always was appreciated and supported by the Nightlife component of the company (the usual suspects know who they are!). The teams I’ve worked with have been amazing. We created such a unique experience that came from love of our guest experience. You know when a stranger comes up to you and recounts an amazing night/time they had it gives you such a warm feeling. I mean, it's all about joy. My time at the Standard has always been full of joy with some salt added for a puckered snap.