For the first part in a three part series spotlighting the resurgence of agriculture in LA, we paid a visit to Finca Tierra Negra, artist Britt Browne's project blending art, activism, and agriculture through the process of "curating" soil.

Consider this. In the first half of the 20th century, Los Angeles County was the largest, highest producing agricultural county in the United States—more bountiful than any county in Iowa or Nebraska. Obviously, things have changed in the last 60 years, and these days the city is better known for concrete than dirt, but L.A.’s agricultural roots haven’t entirely dried up. Individuals and communities across the sprawling metropolis are planting seeds that not only grow food, but regenerate the soil, clean the air, beautify neighborhoods, and inspire the city’s youth.

Before we introduce you to some of the remarkable individuals bringing agriculture back to the City of Angels, here are a few facts to fertilize your mind. 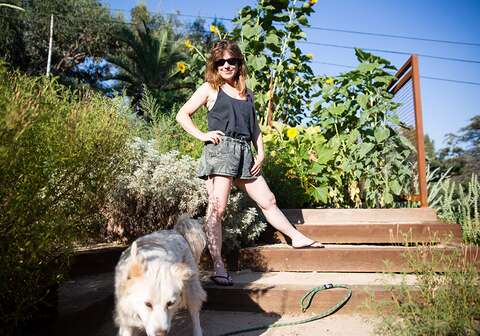 Britt Browne is standing on a steep hillside in Eagle Rock elbow deep in compost. At five feet two inches, the native Angelena is just barely taller than the chocolate colored mound of organic matter in front of her. It’s 95 degrees and the thermometer sticking out of her compost pile reads 110.

This head-high pile of decomposing earth is part of Finca Tierra Negra, or Black Earth Farm, a regenerative, soil-building project Browne launched out of her home in Eagle Rock and her artist studio in El Sereno. The project is part urban garden, part environmental activism, and part art practice, but the big picture is to take waste, like food scraps and gardening clippings, and transform them into energy through composting. “People just look at waste like it’s the worst thing, they see it as a landfill,” she says,” but it’s such a life force. I can’t believe we throw it away."

The compost that Browne is creating at Finca Tierra Negra has nothing in common with the bags of dirt you buy from your local gardening supply store. It’s a months-long curating process that begins by collecting kitchen scraps from local restaurants and ends with a silky, jet black handful of soil that acts like superfood for your edible garden. Each batch is made using what she calls the lasagna method, a no-till style of composting that mimics the way soil breaks down on the forest floor. It’s a holistic approach that aims to recapture life and recapture carbon. Browne has been zigzagging between art and agriculture for two decades, beginning in Vermont where she went to UVM to study farming and graduated with a printmaking degree. From there she landed in New York where she worked as an art director for W Magazine, and a trend-forecaster for Abercrombie & Fitch. (She won’t take credit for it, but there is a good reason to believe that we have Browne to thank for the boyfriend jean.)

Farming lured her back to Vermont where she labored in blueberry fields while maintaining a trend-forecasting gig for Victoria’s Secret. It was in the Champlain Valley of Vermont where she began growing Japanese indigo, and started her first ambitious composting project, drying the leaves of the indigo plant and composting them to create sukumo, the indigo balls used for dyeing fibers that deep oceanic blue.

When the economy turned south and forecasting jobs dried up, she packed up her indigo and returned to Los Angeles where she worked as the creative director of a restaurant in Echo Park, made a short film for the Hammer Museum, and ran the edible garden at a high school in Lincoln Heights where she grew vegetables for chef Josef Centeno’s vegetable-driven restaurant PYT in Downtown L.A. It was at the garden in Lincoln Heights where Browne did the math and realized that one school with 500 students creates 10 tons of food waste each year, the weight of ten elephants. Think of that in terms of carbon emissions, and she says, “that’s like setting 6,000 gallons of gas on fire.”

The silhouette of a baby elephant has become a symbol for Browne at Finca Tierra Negra, a reminder that on average each of us throws away 225 pounds of food a year—the equivalent of a baby elephant’s weight in waste.

For now, Browne is focused on building an inventory of compost at her home, her studio, and in the garden of an elementary school in Los Feliz. Soon you’ll be able to purchase her curated blends, like the chocolate compost she made from cacao pods, and her 420 blend that is intentionally rich in nitrogen, potassium and phosphorous. She’s also growing vegetables for the restaurants that give her food scraps, completing the loop from food waste to food production. “They’re tastier,” she says of the vegetables, “and I think it’s important to share that flavor and that story with other people.” Activism Now: Into the Desert with iO Tillett Wright and Melody Ehsani Power in Numbers: A Guide to Lesser-Known Movements