(Vanessa Recreates her Portrait in the Standard Miami, Sat, Dec 4, 2010)

In our look back on great events during Art Basel, we thought we’d share a few images from one of our big events that just took place this last Saturday. Playboy and The Standard hotel, along with Stoli Elit and Le Metier de Beaute hosted a night called Nude is Muse. (Dinner at The Standard hotel while installations formed around Guests)

The artist Vanessa Beecroft cast 18 nude models to recreate her iconic show at the Guggenheim Museum which was displayed in 1998. In terms of other artists, Ryan McGinness chose to draw and paint portraits of his nude models instead of putting his work on the models. Terrence Koh insisted that his model be casted as a “modern Michelangelo” but with only the models member being painted white. Artist Olympia Scarry had Givenchy design a burka for her which she wore without anything else underneath. Lola Schnabel manned both the DJ booth as well as her own piece which was a super 8 projector showing a film of her erotic drawings on the body of a model laying in a bathtub. Olympia Scarry in a burka designed by Givenchy 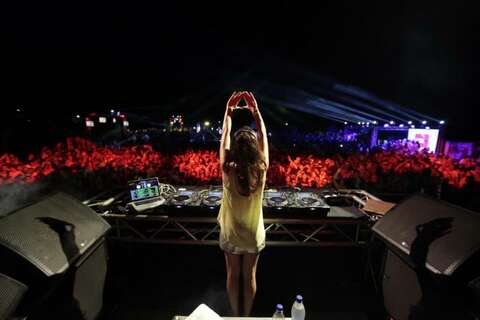 Anna Lunoe: It's A Love Thing An 'Artopia' Pops Up in Chinatown