Roger Steffens is a man of many hats. Vietnam veteran, anti-war activist, fixture of LA bohemian and countercultural circles, actor, voiceover artist, photographer. Perhaps his best known gig though was as the LA radio DJ who brought reggae to the masses with his show "Reggae Beat" on KCRW, and subsequently, as one of the world’s foremost scholars and archivists of Bob Marley. In recent years, Steffens has earned acclaim for The Family Acid, the name under which he and his kids (Kate and Devon), publish colorful, psychedelic photos from his mind-boggling life. Following on the heels of the first Family Acid photo book comes a new volume dedicated to Steffens’ 40-year love affair with the people, music, and landscape of Jamaica. It’s a beauty. On 4/20, The Standard, Hollywood will celebrate the book's release with a wild Jamaican dancehall party, but before we do, we connected with Roger to hear more about his latest creation. 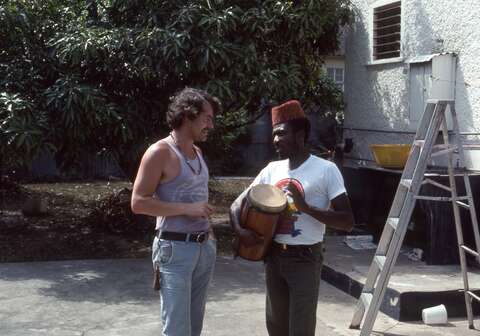 THE STANDARD: What drew you to Jamaica originally, and what kept drawing you back?
ROGER STEFFENS: It was reggae music that first drew me to Jamaica. I had read a revelatory piece in Rolling Stone in the summer of '73 in which an Australian gonzo journalist named Michael Thomas wrote, "Reggae music crawls into your bloodstream like some vampire amoeba from the psychic rapids of Upper Niger consciousness." That article sent me rushing out of my Berkeley apartment to find a copy of Catch a Fire, the Wailers' first international album and to see The Harder They Come the following evening, after which I purchased its soundtrack. I couldn't believe such amazing music had been hiding in plain sight just a couple of hundred miles south of the U.S. Tower Records in the Bay area, which carried a lot of British imports of Jamaican music pressed in the U.K., but I really wanted to be able to find the rarer things I was reading about in the British underground press, and that meant going to the source.

Our first trip was in June of 1976. My wife, Mary, and I arrived just as the socialist Prime Minister, Michael Manley, was declaring a National State of Emergency, mobilizing the Army, and putting tanks on all the island's crossroads. It felt like Saigon during the communist Tet Offensive in February of 1968, where I was serving in the Army. I went back five times in the '80s, each journey scheduled around the annual Sunsplash Festival where I was often the only white emcee. My radio program, Reggae Beat on L.A.'s NPR station KCRW, attracted guests, like my first, Bob Marley, and other big names like Peter Tosh, Bunny Wailer, Burning Spear, Cuture, and the like. 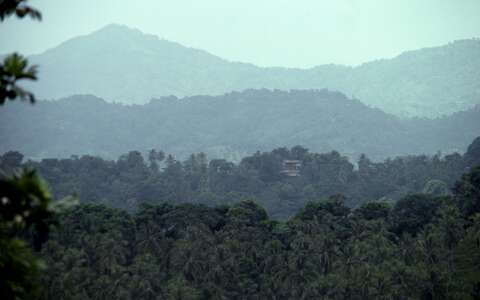 For people who haven’t been, what is it about the country that makes it such a special place?
For my generation, it was not just the music—herb was a big inducement, and although illegal forty years ago, was plentiful. Today it has been decriminalized, and even the new Prime Minister boasts of its quality. The weather is spectacular, the water warm and buoyant, and most of the people friendly and helpful.

We’ve heard that you’re working on another book about Bob Marley, who has become a kind of modern day saint. How does this image of him sync up with the person you knew?
My forthcoming book from W. W. Norton is called So Much Things To Say: The Oral History Of Bob Marley. It contains interviews with him and 74 of those closest to him, conducted over the past 38 years. It's taken me 15 years to compile them all and the early responses have been gratifyingly positive. Booker Award-winning author Marlon James said, "There has never been and will never be anything quite like this: reggae's chief eye-witness dropping testimony on reggae's chief prophet, with truth, blood, and fire." Bruno Blum, French reggae expert and author, said it was the best book ever written about Jamaican music. I give a very well-rounded picture of Marley, with all his flaws and triumphs, generosity and challenges. He was not a saint, but the vast majority of his actions were saintly. As the earliest reader of the manuscript said, "After reading your book, I feel like I really know the man." How did you get introduced to the reggae figures seen in the book, who one assumes were largely unknown and/or difficult to find? Was there someone serving as your guide?
The various reggae activities I've been involved in opened the door to all of them. These included a radio show in LA; a syndicated show, Reggae Beat International, that was heard on 130 stations around the world; a cable TV show, LA Reggae; my founding chairmanship of the Reggae Grammy Committee, on which I served for 28 years; an equal number of years as founding editor of The Beat, a reggae/world beat magazine distributed worldwide; a multi-media lecture, The Life of Bob Marley, performed all over the world since 1984; nine books about Marley and reggae history; and countless interviews on others' radio and TV programs through the present day. Our new book, The Family Acid: Jamaica, includes those who have become good friends over the years, such as Mutabaruka, Chinna Smith, Jimmy Cliff, Dennis Brown, Gregory Isaacs, Bob's best friend Skill Cole, and others.

You were instrumental in bringing reggae music to the U.S. and beyond. Did you have a sense at the time that the music would reach such a wide audience?
I had a great hope that exposure to this vital cultural and moral force would produce interest and that interest would turn to love. My whole life I've been a writer and public speaker, and I love turning others on to things that excite me. My initial instincts on reggae proved to be correct beyond my wildest dreams. For such a small country, Jamaica has an outsized musical culture. Can you tell us a little bit about why that is?
Jamaica is a flashpoint of the convergence of British law, education, and culture; African roots that have been carried forward by the Maroons especially (an unincorporated enclave of descendants of slaves who were never recaptured once they escaped from the slave ships upon docking on the north coast of Jamaica in the 1600s); and American radio and popular music. The fact that it has always been a popular tourist destination for Europeans meant that its musicians had to learn to play a wide variety of world rhythms.

What was it like when these reggae artists would come to LA? What did they make of LA, and more broadly, American culture?
I think that many of the earliest music artists who came to the West Coast were flabbergasted by the number of well-versed fans out here, people who could show the singers copies of their records that they didn't even know had been pressed. This happened to Peter Tosh, who found a number of instrumentals that his Jamaican producers had bootlegged out of his rehearsals. My radio partner, Hank Holmes, had several of these that completely blew Tosh's mind when he visited Holmes' extraordinary archives. To this day, the most popular performers here are the roots artists, as opposed to the dancehall rappers, especially among the Chicano audience, who really know the music. Can you tell us the story behind two photos in the book that are particularly dear to your heart?
The black-and-white picture of me and my wife at the beginning of the book was taken by Ann Summa on the final morning of Sunsplash '81, held three months after Marley's passing in tribute to him. Mary and I had been awake for four days and nights, and this shot was made at the end of the final all-night performance. It reminds me of the cover of Life Magazine's Woodstock edition. A few pages after is a Polynesian style straw hut in Negril in 1976. At that time, Negril's paradisiac seven-mile-long white sand beach was bereft of buildings, and this was virtually the only one we saw. It was called Santfleben, a dental clinic owned by a couple of dentists from Long Island who went down for four months every winter and gave free dental care to the locals. Today the whole seven-mile stretch is built up with big hotels and all kinds of little stores and clubs.
Previous Next 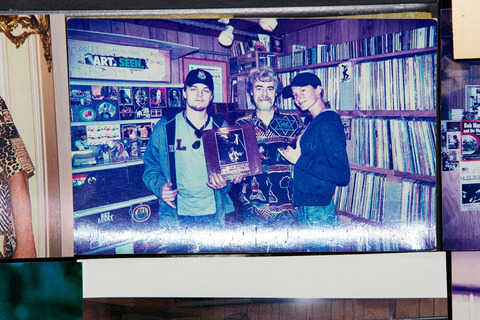