With the current administration’s penchant for executive orders and rumors of another pornography study on the horizon, Dian Hanson is more relevant than ever. No one knows more about the ins and outs of how politics affect sex than Taschen’s “Sexy Book Editor” (dream title alert). Hanson made her career editing porn magazines like Leg Show, Oui, and Juggs, and she’s the mastermind behind The Big Butt Book, The Big Book of Breasts, and The Big Penis Book, among other risqué titles put out by the beloved art book publisher. We sat down with the expert to chat about America’s fluctuating views on sexuality and what we might be in for in the era of Trump. 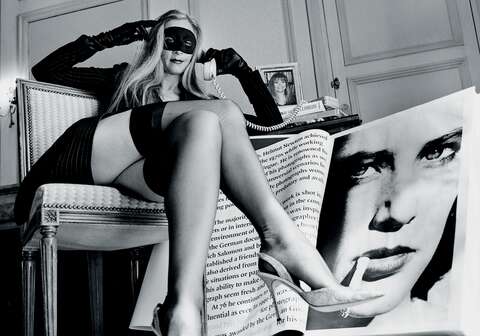 THE STANDARD: You’ve been an editor of pornographic content since 1976. What era in the past is most like ours today, sexually and politically? Are we on a new frontier or are we repeating ourselves?
DIAN HANSON: Going back to the first of its kind, Nixon, of all people, called for the Commission on Obscenity and Pornography after the fall of censorship laws in Europe. That commission found no danger. I’ve followed the fluctuations, and it has risen and fallen with Republicans and Democrats.

Mr. Trump has come up with a “brand new idea”—he will have a presidential commission study obscenity to find out what it’s doing to our youth and families. Whatever the new commission finds, you’re not going to get the general public behind it. Marriages rely on access to sexual stimulation. People want their pornography, and they don’t want you to mess with it.

What interests you most about the particularity of people’s sexual preferences?
Someone’s life will not predict their sexuality. They can be conservative in every other way, and their sexuality will still be set at however it was formed before their fifth birthday. Mr. Pence is wrong that you can change people. What he should do if he really wants to prove that his gay conversion therapy works is go through the program, but reversed—converted to be gay. Since he knows it works, there is no issue, because we can convert him right back to being straight.

I was reading about your praise of the first-wave feminist movement and how the newer evolutions are really harsh toward male sexuality.
Young women seem very intimidated by male sexuality, and I don’t understand it. Men just want women who see sex the way they do, and they want to talk about it without being chastised.

Do you think the trend of BDSM has any effect on our political ebb and flow?
Women’s most common sexual fantasy is to be dominated in the bedroom. They want to be strong in their careers, and they want to have power in other aspects of their life. That should be completely OK. I don’t think a desire of sexual submission hurts women. It’s a game that everyone wants to play. I didn’t like the conversation that happened when 50 Shades of Grey came out, making it feel like this is a new theme for women. This has always been there. It isn’t because we are in more powerful positions.

I think the most horrifying thing is that we have these 50 Shades of Grey women looking at Trump and saying, “That’s what we need, a strong man.” They are confusing the bedroom with the boardroom. They see a guy who is a strong “daddy” and very dictatorial. It’s arousing desires to be controlled in their personal lives, and they’re confusing this with good leadership. We saw an outpouring of misguided women, white women—53 percent of white women voted for Trump—who saw him as a strong daddy, and I have a feeling they all had a copy of 50 Shades of Grey. Maybe let’s rename it 50 Shades of Orange.

How do these women justify Trump’s treatment of women?
I’ve got an example that gives me a clue. When I lived in New York, everyone saw Clinton as this sort of dud…until it came out that he was cheating with these women. Suddenly, among my female friends, I was hearing people call him sexy. He didn’t sound like a hick—he sounded like a hot guy. Men, alternatively, were the ones pushing forward with how horrible it was that he had cheated on his wife. A lot of women, for whatever reason, are attracted to men who are total cads, womanizers. Maybe it’s because they are competitive with other women, or maybe it’s some subconscious ovarian pull toward a dominant man. They hold some type of appeal.