You may have never noticed it before, but when you walk into the lobby of The Standard, East Village, you’re actually walking into the ground floor of 27 Cooper Square, one of the East Village’s more historic tenement buildings. Built in 1845, the four-story brick building is a landmark of the Black Arts Movement of the late 1960s, and, once upon a time, it was a hub for iconic Beat writers and visual artists. Maybe the best thing about the building, though, is that one of those writers still lives there on the fourth floor—a tiny 82-year-old woman who goes by the name of Hettie Jones.

Hettie moved into the building in 1962 with her then husband, the writer, poet, playwright, and activist Everett LeRoi Jones, or “Roi,” as his peers and neighbors knew him. Hettie and Roi’s two daughters grew up in the apartment—Lisa, now a writer, and Kellie, an art history professor, curator of black contemporary art, and winner of a MacArthur "Genius" Grant for her work diversifying the Western canon.

The building at 27 Cooper Square has seen more than its share of political, activist, and artistic activity. It was here that Hettie wrote her twenty-four books—children’s books, poetry, and memoir—including How I Became Hettie Jones about her and Roi's interracial love story. It was also in their apartment that Roi wrote his seminal 1964 play The Dutchman, in which Clay, a black man, and Lula, a white woman, talk flirtatiously as they sit side by side while riding a train that could be called America. In the apartment, Hettie and Roi founded Totem Press—a small publishing operation where they edited books—and Yugen—a magazine that published Roi’s poetry and the prose of their friends and Beat Generation stars like Jack Kerouac, Allen Ginsberg, and William S. Burroughs. Submissions arrived at the kitchen table, and Hettie would piece the magazine together by hand, at night, page by page.

In the mid-ʼ60s, Hettie and Roi's marriage ended. Roi moved uptown to become a leader of the black power struggle, changing his name to Amiri Baraka and leading the Black Arts Movement. Hettie has continued to live in the same little building for 55 years, writing, teaching, and fighting for social and racial equality.

On a recent Friday, Hettie invited Standard Culture into her living room to discuss the art and activism that has filled her life. As you climb the steps to the apartment, it’s easy to imagine the parties for writers, jazz musicians, and activists that once took place here. Having been on the front lines during other traumatic times and having seen real change first-hand, Hettie has a valuable perspective on America’s current political moment. Sure enough, we left inspired by her witness, ready to keep pushing ahead. 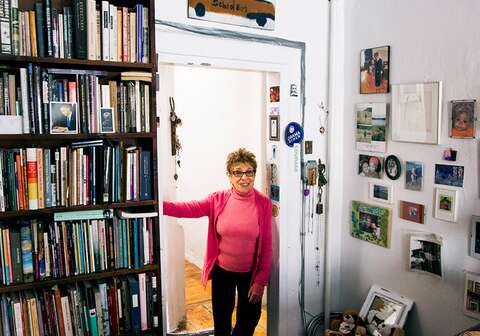 One of the things that’s remarkable about your life is that somehow you, as a sheltered, middle-class Jewish girl, found yourself in the middle of the Beatnik movement. Is there something about that period that informs your perspective on where our country is right now?
I keep thinking there's got to be strength in numbers. You can blame Donald Trump all you like, but you have to blame the Republican party first and foremost. They just wanted the control. [Steve] Bannon terrifies me. We have to train younger people to be militant, to be watchful. There's a sign on my door that says, "I sit with John Lewis.” You just have to keep on pushing and not let this little glitch that we have right now stop you. We have to keep our eyes open, eyes on the prize.

You’ve written 24 books, and one of the things that strikes me about the books for children is the way they seem to demand a more inclusive, diverse world. What motivated you to start writing for children of color?
I got married before Loving v. Virginia in 1958. The first lesson I learned being with Roi was when we were walking along Bleecker Street one night. Little Italy was very bad at that time. Some boys were yelling at us. Nobody insulted me. I turn around and I'm ready to fight and he grabbed me and he said, "Just keep walking, just keep walking." I think I wrote about that in my book, but they would've beaten him up, not me. I realized, as a white person married to a black person, that the world is divided. Also, Kellie was born within the year after we were married, and, of course, I began reading to her as soon as she was one minute old. Right away, I noticed that there were no children's books with black children in them. None. That was offensive and that’s what started me. You wanted to create a world that reflected your daughter?
As soon as I had children, everything changed, because you are the protector of those children and what you have to do is make sure that they grow up exactly the way they should grow up. I'm sure you had people who loved you to pieces and explained to you what it's like to be a black person in this world. I couldn't explain it, but Roi and his parents could explain. They provided that context of family. Before they were born, LeRoi said, "Don't delude yourself in this interracial thing." He said, "One half makes you whole," because that's the way the birth certificates were. He said, "We'll raise them that way." I said, "All right. I believe you. You know better than I do." So, the first book I wrote, which never got published because it was, I think, too soon, was about Rosa Parks, but it was called The City that Walked. It was a much more general idea of who was walking then during the Montgomery, Alabama bus boycott. The publisher bought it for all of $300 dollars and never published it. Hettie and her two daughters, Kellie and Lisa.

But it didn’t stop you.
A little while before I was divorced, Lyndon Johnson established the war on poverty and I got a job working for Mobilization for Youth, which was the Lower East Side's antipoverty agency, and I got hired as a writer. When the writing project was over, they let me start an afterschool program. I went looking for books. There were books for kids who spoke Spanish, [but] no books for anybody of color. I said, "Okay, I know what I'm supposed to do." I guess that's how I became an activist. I guess I had a strong sense of justice. I went to the library and I thought, "Well, they won't do black people, but maybe they'll do Indians," so I did. The precursor to the Smithsonian was something called the Bureau of American Ethnology, and they had collected Indian songs and published them in a book. I found those in a library and then sold that to Dial Press in 1971.

You also published a magazine with Roi.
We had Yugen and published books. I did a lot of that by hand at night after my job. Each one of my kids was born and I went right back to work afterwards. Nobody suffered. I just had all of this energy to affect change on the people who held on to the established way of looking at things in literature, because that was the small world that I could affect. Since then, how do you think the times have changed?
They've changed, but they haven't changed enough. I worry about it all the time. Even before Roi and I were married, we lived together, but as soon as I was in a relationship with a black person, and knew his family, and began to understand a little bit about race relations, it didn’t take me long to learn. Before I went away to college, I had never been in the home of a person who wasn't Jewish. All I can remember when I was little was people saying, "If it happened over there, it could happen over here." Then, when I went to college in the South, it was another eye-opener. The roommates to whom I'd been assigned didn't want to live with me because I was a Jew. That's when I learned about white people, and I never identified with them because they didn't identify with me.

How has your politics informed your writing?
I don't feel it's a good idea to just leave it out. It's part of my life and it's part of how I wanted to express. I earned my living sometimes doing little stories for textbook companies, and I would sneak in the black people. Once you realize all of this stuff and then you see how people are… You can't even say they're marginalized. They're just not in it. 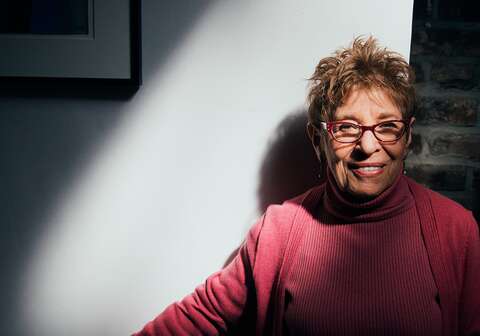 What should the younger generation be focused on?
I think they're opening their nice big mouths now, and I appreciate that. I appreciated the Women's March. Everybody needs to keep on learning and raising their voices. They have to learn to determine for themselves what moral stance they have. Everybody says, "Oh, the death of religion," but what about [the death of] political morality? Is there even such a word? I don't know, but that counts for a great deal. Fake news or not, you have to have standards.

You had two lives: one as a writer and one as a teacher. How do you use education and writing as an activist tool to inform, incite, and empower?
You bring history and the history of how people have dealt with their own era into the classroom. I can't imagine anything as fucked up as things are right now, but then again, they were having a hard time back at the beginning of the 20th century. We are now protesting police brutality, but that should be put in context of the history. When you bring that information to students, they realize that when people join together it raises the volume of our voices.

What are you fighting for now?
Oh, man, I'd like to fight that person out of office.