Twice a year, the ever glamorous Purple crowd takes over Narcissa to toast their latest issue. Volume III, Issue 24 features a beautifully bucolic image of the great Catherine Deneuve. Inside, don't miss the Kenny Scharf photo spread. (Did we give them the inspiration?) Anyway, we wondered, for no particular reason, if Purple weren't purple, what color would it be. We surveyed the room and thanks to the creative collective conscious, there were a handful of peculiar overlaps...and many different shades of purple. Mauve, a pale shade of purple, was elected by Glenn O'Brien and the founder of PIN-UP, Felix Burrichter. (Felix had an "off-the-record" response as well. See above). Purple's gentler, more fragrant friend lilac did very well with votes from Courtney Love, Arden Wohl, and Enga Purevjav who called it, "More sexy than purple." The writer Steven Galloway went with the absence of color, not white, but "clear." It was good ol', sexy black that won the day however, with nods from Petra Collins, Sante D'Orazio, and Purple's main man, Olivier Zahm, who said it was either that or, "fuck."  We'll leave that one to the imagination. 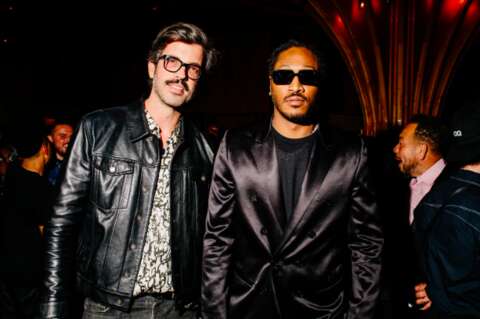