Public Access TV might not want to be compared to the past or present, but human beings seek familiarity. The NYC-based band is on tour with their second album Street Safari, an infectious group of songs that will hold a strong appeal for anyone who has lost hope in the present indie rock scene. The remedy the band offers up is rife with ‘80s pop references, alluded to in the album cover featuring the perfect ratio of faux fog and a wardrobe that would give Sting flashbacks.

Either way, in the spirit of rock, the guys of Public Access TV seem adamant that what you’re hearing is its own. When you watch music videos like “Lost In The Game” and “Metrotech” that point becomes clearer. Kevin Corrigan dances the streets of Brooklyn alone at night. A young woman seeks revenge on bothersome men after a one night stand stole her favorite leather jacket. The themes boils down to frustration with the system we live in, with a simultaneous desire to joke and make light of it. Maybe what Street Safari really achieves is the reminder that rock music was always made to marry the two.

We sat down with the NYC-loyal band at The Standard, Downtown LA to get them to admit that California has its appeal. THE STANDARD: How long did it take for you guys to make this record, and what did that process look like?

John Eatherly: There wasn’t too much of a gap from touring the first one to writing this one. We really went in knowing what we wanted it to sound like. Every song was demoed before we went in to record. All the songs are really fresh. I think they were all written less than a year ago. The biggest difference would be that our first album was written over such a long period of time, maybe six years.

What was the main intention of the album? Evolution? Change of sound?

John: Directionally, we crammed so much into this record. It’s more simplistic in a way. There is definitely more variety in sound, but simplicity in the process. With production, we had more fun with layering and multi-tracking. The first record we pretty much did live. We made this one with the live show in mind. We wanted something that grooved from beginning to end, that didn’t take to sudden of a shift. We let it breathe.

Is there an energy shift in your shows with this record?

John: I don’t like it when we have to be so stiff, and you are trying to recreate the album live. We’ve always been good at having our own energy that is different from the recordings. The record and the shows almost live as two different things.

Is the NYC music scene inspiring for you guys? Do you see a movement there that you consider yourselves a part of?

John Eatherly: It’s more like little individualistic cliques everywhere. We are not a part of anything. I don’t think we’re influenced by anything either. We’re going to play an association game, but with cities and drinks. New York?

John Eatherly:  My drink of choice would be a club soda with bitters. I used to be a tequila and soda man but I don’t drink anymore. It had to have a ton of mushed up limes.

John: It’s tough, because he’ll probably associate that with every city.

Pete Star:  Cosmopolitans. That’s what they do in Sex and the City.

If you had to karaoke one Pet Shop Boys song, which would it be? 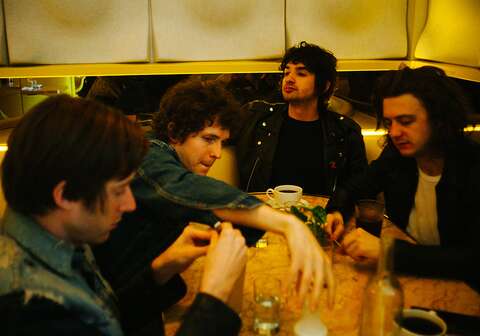 Max: Did he? I think that was one movie.

Xan: More than one movie.

Max: The one with the train? He’s dressed like a hobo. He didn’t have shoes in that movie.

The Standard: What about the ladies?

John: Is it Sharon Stone in Fatal Attraction?

The Standard: Killer style there.

John: When she’s got the white dress and her hair is all slicked back? I see that coming back now.

Pete, what about you?

Pete: I’m not good at these things. Sigourney Weaver?

Have you guys had weird TV licensing moments with songs? Like an ABC Family teen romance scene that starred your ballad?

Xan: People tell me that they hear us places.

John: We do have a song in that Liam Neeson movie.

John: I saw it. It was pretty bad. The song was so faint you could barely hear it. 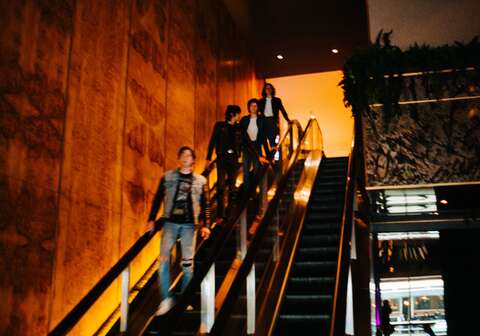 You guys have a song about not wanting to ever live in California, but Xan has already said he would do it.

John: He was the first to fold on that.

You have to name one thing you like about it here.

John: We had a good time in Weed, California once.

Max: Some crusty kid came up to us with this goat that had fully grown horns. He was on this little leash. He was showing us how he could make it dance.

John: But Max was scared.

Xan: Also, this kid came out of nowhere.

And you guys weren’t on acid?

John: Again, Max was really scared. He’s OK talking about it now, but it was a bit Lynch-ian.

Pete: This place has everything. You can name it, and it’s here. You want for nothing.

What’s next after tour?

John: Immediately, I don’t know. We want to just keep taking this record around. The last show of this leg is in New York, and it kind of wraps us back home. We have about 15 more shows till it’s over.


I think that’s all I got for you guys.

Xan: Are you who we talk to about getting a free room here?