Vahram Muratyan is a Paris based graphic designer who on an extended stay in New York was feeling a bit homesick and started to think about the similarities and differences, the pros and the cons, the yings and the yangs of the two great cities. The longing became a blog. The blog became a book, "Paris Versus New York, A Tally of Two Cities," a collection of illustrations "dedicated to all lovers of Paris, of New York, and to those who are torn between the two."

Vahram launched the French version of the book at the infamous Colette in Paris and for the U.S. launch he'll be at The Standard, New York next week producing an installation in our shop. The debut and book signing is February 2nd at The Standard Shop (6-8pm) so stop by with your advanced copy for sale here.

But before he heads state side, M. Muratyan himself took a bit of time to answer some of our questions and finally get to the bottom of this whole Paris/New York thing.

Standard Culture: So, we'll begin with a little Proust. What is your current state of mind?

What is your idea of perfect happiness?

What words or phrases do you most overuse?

Now the book. You call it Paris VERSUS New York and even though it is a friendly match, do you think there is bit of rivalry between the two?

I think invisible bridges exists between cities, especially those two. They complete each other. The rivalry can be obvious sometimes. What they offer can be appreciated differently, depending on your current mood. Cities are just like people. Sometimes you're glad to meet again. Sometimes you wonder why the hell you are together.

Some one is visiting NYC and Paris for the first time but they can only do three things in each city. What would you pick?

In Paris, I would say walk along the Seine, get lost in the Marais (grab a falafel on Rue des Rosiers!) and get a great view of Paris from Beaubourg.

Love falafel on Rosiers, although I always manage to forget they're closed on Fridays. And New York?

In New York, I would say walk or run the Central Park Reservoir, tour the Metropolitan, stop at the Burger Joint on 57th Street, and promenade the Brooklyn Bridge to take in a bit of the skyline.

Even though the Burger Joint is in another hotel, we'll let that one slide. So, who has the better metro? New York’s 24 hour, but often sporadic service or Paris‘ prompt, but limited (and often on strike) service?

Paris has a better deserved line, a LOT of stops, sometimes even too many! I love the pay-as-you-go on the MetroCard — I just can't stand those "10-tickets" in Paris anymore.

Let's talk about the design. Your book definitely has a mid-century vibe. Is this the style you most enjoy working in or did it just seem right for the idea?

It was a way of getting the simple messages even simpler. Sure, it can be seen as an homage to old advertising techniques, but primarily I wanted to convey a sense of warmth and a real positive mood.

What are your thoughts on the relationship between the word and the image? Is the wording inspired by the image or does the copy inspire the image? For example, I loved the Quasimodo and King Kong because I don’t think I would have ever thought to compare Notre Dame and The Empire State Building, but by connecting them through fiction it opens up all these different ways the two buildings speak to each other.

The whole Paris Versus New York project is about creating parallels and being surprised by linking two things from the cities, whatever the angle: the word or the place, the form or the color, the use or the meaning. The inspiration comes and goes on the paper.

Do you draw by hand or by computer? Both?

Words become sketches then computer is at the end of the process.

Just a few more random questions. What is your favorite font?

What were your last 3 Google Searches?

What hangs above your sofa?

What is your motto?

That's a really hard one. Something like, pessimism is but a mood. Optimism is willed. That's a sentiment I think any New Yorker or Parisian understands come January. 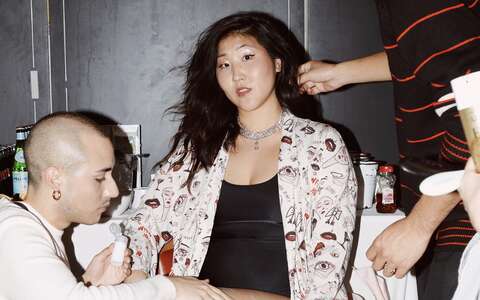