Nile Rodgers occupies a unique (and possibly singular) position in the pop pantheon. On the one hand, he’s penned, produced, and played on a truly staggering catalog of the most beloved and widely known songs of the last 40 years. On the other, he’s not exactly a household name (or as he puts it, a superstar)—and this comes from someone who has known his share of superstars. For Rodgers, the music he’s made is the superstar, and it’s not going away any time soon. Not only is his catalog of hits solid gold (or platinum), it’s infused from front to back with a funky, euphoric spirit that is instantly recognizable whenever you hear it—Good Times, indeed. When Rodgers performed at The Top of The Standard, he sat down for a chat with Standard Culture—mere blocks from where he grew up and began his musical journey. Nile Rodgers, Pharrell Williams, and Daft Punk perform onstage during the 56th GRAMMY Awards at Staples Center on January 26, 2014 in Los Angeles, California.
THE STANDARD: What are your memories of growing up here in the Meatpacking District?
NILE RODGERS: It’s funny, we call this the Meatpacking—when I was a kid, that’s what it was. Directly across from my house was a huge loading dock. It was a very cool neighborhood. A lot of artists, dancers, and actors lived here who were just starting out.

How did growing up here lead to your career as a musician?
My family were beatniks and music was so much a part of their lives. I grew up around what they called the modern jazz scene, bebop. People like Thelonious Monk and Gloria Lynne would come over to our house—it was a hotbed of activity. In our world, because they were so close to my parents, they were more like friends and buddies. I didn’t think of these people as stars to the rest of the world. I was like “Oh, check that out, they get paid money to do what they do at my house free.”

What did you learn from being in the house bands for Sesame Street and the Apollo?
This was all part of the learning arc of me becoming a professional musician. My first real steadily paying job was with Sesame Street. And the musicians in the band were spectacular. The Apollo was more of a learning-type atmosphere. The repertoire would change all the time and we’d have to entertain the audience ourselves. I always called it the Black Colosseum. It was thumbs up or thumbs down. You had to be good at the Apollo or else they’d let you know it right away.

"I ran to a payphone and called my partner and I said, 'Look, whatever you do, write this down: "I'm coming out."'"

When you heard yourself on the radio for the first time—was it as monumental an experience as other artists describe it?
Hearing myself for the first time on the radio was big, but hearing myself for the first time in a club was even bigger. I made a demo and the engineer who recorded it happened to be a DJ at a club. He called me up one night and said I had to come down. And he wouldn’t tell me what I had to come and see. When I walked in the club, he immediately started laughing. And he put the needle on and I heard our opening drum fill and the bass line come in. The place went batshit crazy. I mean, the whole place screamed, jumped up, and started singing. I had never experienced anything like that, and in a strange way, I’ve been chasing that high ever since. That moment of complete strangers validating your musical existence is the most amazing thing ever.

Have you known when a song was going to be hit?
I don’t think that I’ve known for a fact except for maybe a few times. I knew “Le Freak” was a big hit. I knew “Good Times” was a big hit. I knew “We Are Family” was a monster. I knew David Bowie’s “Let’s Dance” was good—I wasn’t sure it was going to be the gigantic hit that it became. Madonna—I just knew she was a superstar. She had that thing, that very special thing that I’ve only seen a couple of times in my life. If a person had asked me if I thought “Get Lucky” was going to be a smash, I would have said, “Yeah, it’s good, but wait until you hear ‘Lose Yourself to Dance.’” Oops. Wrong. 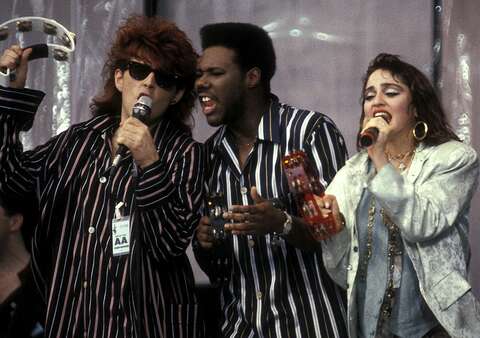 Tom Bailey of the Thompson Twins, Nile Rodgers, and Madonna perform at the Live Aid Concert to Raise Funds for the Ethiopian Famine Crisis on July 13, 1985 at the John F. Kennedy Stadium in Philadelphia, Pennsylvania.
You’ve talked about how gay and transgender clubs were inspirational to you. Why was that?
Back in the day, it was well-known to people in the music business that if you wanted to hear music that was cutting-edge, you wanted to go to the clubs where they had a reliable crowd. Gay clubs, transgender clubs, fetish clubs—they each had their audiences and DJs. I would venture to say that those audiences were more particular. You had to hit them with more artistically interesting music, even though you had a captive audience. So I would go to those clubs when I really wanted to hear new music, because if you just went to the popular club, you would just hear the songs that were popular.

There was a great spot on Eighth Avenue called the Gilded Grape. Gilded Grape was more of a transgender club but, you know, in New York everybody mingles. In late 1979, I got to work with my first big superstar, Diana Ross. So I’m out hanging out at the Gilded Grape and I’m in the bathroom standing at the urinal and on either side of me are Diana Ross impersonators. That’s when it hit me.

"When I first heard 'Rapper’s Delight,' I hit the ceiling. That was horrifying to me."

I ran to a payphone and called my partner and I said, “Look, whatever you do, write this down: ‘I’m coming out.’” He was half-asleep and he was like, “What do you mean? ‘I’m coming out?’” And I said, “Because to the gay community, “I’m coming out” is a battle cry. It means the same thing as James Brown’s “Say it loud—I’m black and I’m proud.”

And she [Diana Ross] loved the song until a really famous DJ told her that the song was going to ruin her career because everybody was going to think that she was gay.

She came to the studio and confronted us and said, “Why would you guys try and ruin my career?” And I was like, “Diana, that doesn’t make any sense. If we ruin your career, we’re going to ruin ours.” She says, “Well, Frankie told me if I do this song, it’s going to ruin my career.” I said, “Diana, this is just a song that you’re going to start your show with.” And if you’ve ever seen a Diana Ross show since 1980, she starts her show with “I’m Coming Out.” 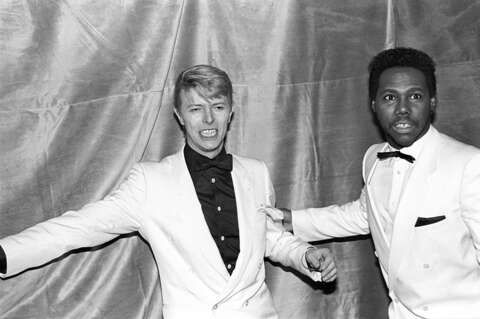 Nile Rodgers and David Bowie at the Frankie Crocker Awards at the Savoy in New York, on January 21, 1983.
What was your perception of your songs getting a second life from hip-hop?
Well, the first time it happened, it was weird because it took a lifetime of experience to write a song like “Good Times.” So when I first heard “Rapper’s Delight,” I hit the ceiling. That was horrifying to me—that I could work so hard and not get credit on a record that was probably going to outsell ours. But it worked out. And now when you see the copyright, we’re credited fairly. But that was probably the first sampling lawsuit where somebody took a piece of electronic media and put it on another piece of electronic media and said it’s an original song.

By the time of Notorious B.I.G., we had been sampled hundreds of times. That was the joke in the old days—we would always say, “Okay, if Puff [Diddy] wants a new record—boom—we got it.” People don’t realize that those MCs grew up with disco. When they were kids, that was the music they were listening to. And the fact that they were able to flip it and turn it into other songs was amazing to me.


At this point in your career, what does it mean to you to have this catalog of songs?
You know, when you start out as a composer, the only thing that you could ever wish to have happen is that your music will be known when you’re not around. I don’t mean when you’re dead and gone. I just mean that people will play your music when you’re not in the room or you’re not playing a live show.

That’s what I felt that first night when I walked into that club and they were playing my music and they had no idea who I was. I was flattered. I was taken away to a place I had never been before. And that experience taught me something about my career: I knew that I didn’t have what it took to be a star because a lot of my friends were stars. They had that thing. But I knew that I could make music that would be a star. Songs from a Room: Seinabo Sey at The Standard, High Line The Sounds of Spring: A Standard Sounds Musical Journey