CFDA Award-winning designer and Standard regular Michael Bastian is best known for his elegant take on American menswear, but this week we wanted to hear his take on the high-low cultural event of the season, Anna Nicole: The Opera. Ever the good sport, he obliged us with this review.

Anna Nicole: The Opera is really something to chew on, which is a little ironic given the prominence her food and weight issues are given in this English production, now showing at the Brooklyn Academy of Music.

I think we pretty much all know her story by now, so I don't think I'll spoil anyone's fun by quickly outlining it here: poor girl from Nowhere, Texas, marries and has a kid super young, moves to Houston, gets a crappy job at Walmart, gets a better-paying job giving lap dances, gets fake boobs, marries an 80-something year old billionaire who conveniently dies within a year, spends the next 10 years or so trying to get her share of his money while slipping into obesity and drug addiction enabled by her lawyer, eventually dies.

A scene from Anna Nicole: The Opera

For some reason they leave out her Playboy and Guess work — arguably her greatest achievements — but I suspect this is more due to trademark issues than downplaying her few legitimate successes. Nothing in her story shocks me — it didn't even shock me when I was watching it go down live, much less when it's being acted out and sung in front of me. Maybe it's my Bravo addiction; maybe it's because we American's love a good salacious rags-to-riches (then back to rags) story.

The opera is good, trashy fun cloaked in the most formal and classic of presentation methods. But in the middle of the fun (and it was definitely fun hearing the filthiest stuff being sung in classical opera-style), I surprised myself by feeling a bit offended that all of this "nasty underbelly-of-America" exploitation was first written and staged by a couple of English guys, Mark-Anthony Turnage and Richard Thomas. Somehow, it all went from "us laughing at her" to "them laughing at us" for an uncomfortable moment or two.

That said, I always feel that the most accurate pictures of a person or place are taken by observant outsiders, and that's pretty much what's happening here — exaggerated, of course, but more or less accurate. So, why the hell was I feeling defensive? I guess it's like when someone picks on your brother or sister. You can harass them endlessly every day, but when someone else starts going after them, watch out!

It wasn't until the morning after that I realized this is exactly the type of show that should move to Broadway. Instead of serving up cartoons or rehashes of movies we've all seen a million times, maybe the typical Broadway-going tourist could use a little of this stuff, though I suspect they're going to Broadway shows to forget, not wallow in, reality. Instead of treating Broadway as a big TV, maybe it should be more of a mirror? Now that would be interesting. Dropping in on Hotelier Liz Lambert at South by San Jose 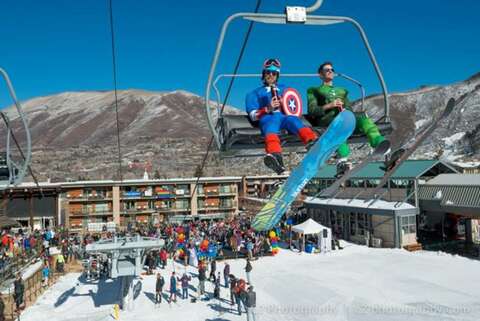 What Is This Aspen Gay Ski Week?